200 Years of Modern Greatness: Happy Birthday to all of Hellas

Two hundred years ago brave men stood for liberty against a cruel empire. They could not fail for  the diaspora came to help them. Greek philosophy, science, religion had done so much to create the world that when she needed us, we came.

Children born in other lands returned and paid the debt they owed.

Hellenic culture sent out ideas that created Athens, Alexandria, Antioch, Aksum-  classical culture fused with vibrant Christian Orthodoxy that made a commonwealth of nations (Romania, Serbia, Bulgaria, Russian) and that endured defeat of the motherland in 1453. The cultural ideas of Hellenic education had been spread to the west of the world and helped create modern Britain and France. In the War of Independence all these children, natural and adopted, of Christian Hellas came home to help bring liberty.

This is the tribute our College and School pays to Hellas on the Bicentennial of her modern independence.

March 24, 2021
Hellas: With No Monument to Preserve Her Except that of the Heart
Next Post 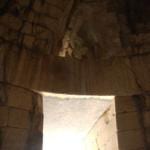 March 26, 2021 He was born in the Tomb of Agamemnon (Happy Bicentennial Greece!)
Browse Our Archives
get the latest from
Eidos
Sign up for our newsletter
POPULAR AT PATHEOS Evangelical
1