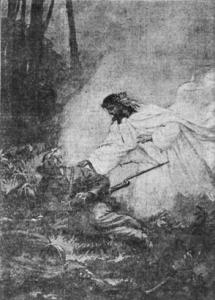 On the road to Emmaus, the newly risen Lord Jesus came to two of His followers. They were going home in anguish. Jesus loved his friends and could have met their immediate need. He wished them to be happy, but He hid himself.

Scriptures say the two disciples were communing, talking, arguing with each other about all that had happened. They were trying to make sense of what they had believed about Jesus and what had happened. If Jesus had appeared, then dialogue would have ended immediately. The overwhelming sight of their dead teacher alive would have ended any act but worship. Jesus was the greatest teacher and so He wanted these two students to understand and then to see. He wanted to meet their deep intellectual need, clear up confusions about Scriptures and history.

If He appeared in all His glory, then discussion would have ended and worship would have been the only just result.

Jesus asked them a question! He kept the argument going. He asked them, ‘What is it you are debating as you walk?’ Jesus lets them say things that are muddled. He teaches them. The Master

Teacher meets them where they are, does not shut down their reason, but teaches them. They need to see Him alive, but not until they can better understand what this life means.

When the time came, Jesus revealed Himself to them in the breaking of the bread.

When I was a boy, I wondered why the Gospel writer did not include the teachings from the conversation. I wanted to know the details! One day while reading, I realized that Jesus wanted to walk with us (with anyone who would talk) and teach us. He did not wish to short circuit the process! We have our own questions, not exactly like those of Cleopas and his friend. We must break bread with Him ourselves.

The Creator of the cosmos, the maker of every beauty that was, is, or will be, shows Himself in the mysteries of the Lord’s supper. This splendid vision is the true light and by that light we see beauty rightly.

May 16, 2021 The True Light, Do Not Expect So Little
Browse Our Archives
get the latest updates from
Eidos
and the Patheos
Evangelical
Channel
POPULAR AT PATHEOS Evangelical
1