Stags, Green Men, Creation, and Mystagogy in the Church

A few years ago in the church of St. Eustace in Paris, France a stag was filmed walking around inside. This has been bouncing around my newsfeed again, lately, so I thought I would look into it.

I am a little disappointed to say that it turns out the stag was not wild, but a trained deer named Chambord and he was being filmed for an art project at the church. The stag, of course, was chosen because St. Eustace saw a vision of the cross between the antlers of a stag. That this was staged and not a mere chance moment, ultimately, does not ruin or reduce this moment for me. Rather, it serves as a reminder that we have often sought to bring the outside in, to reflect creation in our houses of worship.

The ancient Israelites are the first in our direct line of descent to do this. Look at this description of the inner parts of the first temple:

For the entrance to the inner sanctuary he made doors of olive wood; the lintel and the doorposts were five-sided. He covered the two doors of olive wood with carvings of cherubim, palm trees, and open flowers; he overlaid them with gold, and spread gold on the cherubim and on the palm trees.

So also he made for the entrance to the nave doorposts of olive wood, each four-sided, and two doors of cypress wood; the two leaves of one door were folding, and the two leaves of the other door were folding. He carved cherubim, palm trees, and open flowers, overlaying them with gold evenly applied upon the carved work. He built the inner court with three courses of dressed stone to one course of cedar beams.

Cherubim, palm trees, and flowers are everywhere, and it doesn’t stop here. The priestly robes themselves were adorned with images from creation, and even the tabernacle before the temple had elements of nature built into it. There is something about creation itself, the true temple of the Lord, that makes us want to incorporate it into our churches. All of this reminds me of the Southwell Minster in Nottingham.

While now an Anglican minster and the cathedral for the Southwell/Nottinghamshire Diocese in the Church of England, the church’s foundations go back to the seventh century. Most of the current building, however, date to the 13th century. It was during that time that many “green men” carvings were made. If you ever have a chance to walk around the minster, I encourage it, stone foliage can be seen everywhere, as if creation itself has built the church. But what is most fascinating is the inclusion of the green men. Green men are part of traditional folklore, sometimes they are giants, other times giant walking plant men, similar to but not identical with Tolkien’s ents. Somehow, and for some reason, they find themselves here in the church. I don’t know why the stone-masons decided to include them, but I think it has something to do with their view of reality. Not that they believed these green men existed, though they may have, but they understood nature itself to have an identity, to be personified, and to be subject to the same Lord as the rest of us.

Maximos the Confessor in his Mystagogy tells us that according to Dionysius:

God’s holy church in itself is a symbol of the sensible world as such, since it possesses the divine sanctuary as heaven and the beauty of the nave as earth. Likewise the world is a church since it possesses heaven corresponding to a sanctuary, and for a nave it has the adornment of the earth.

The world, and by this Maximos means the cosmos, is a symbol of a church and vice versa, each is imprinted on the other. He goes on to tell us how the church and creation are both like a man and vice versa. The point being this, for those with the eyes to see there is not a hard distinction between creation, humanity, and the Church. So when the ancient Israelites depicted angels and bulls and pomegranates in the temple or on their priestly robes, and when the stonewrights working on Southwell Minster included green men, they were simply depicting a deeper reality, that these things are inextricably connected to one another, that churches are the particularities that allow us to see creation itself as the Church. What is more, it is a reminder that through the person of Christ, all of these things have been united to God since Christ united not only humanity, but all of creation to himself.

May 30, 2018
Camping on the Edge of Elfland: Pat Noone and Green Hills Farm
Next Post 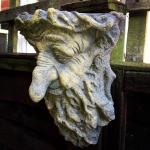 Racial Justice and Third Party Politics:...
Cracks in Postmodernity
Related posts from Letters from the Edge of Elfland