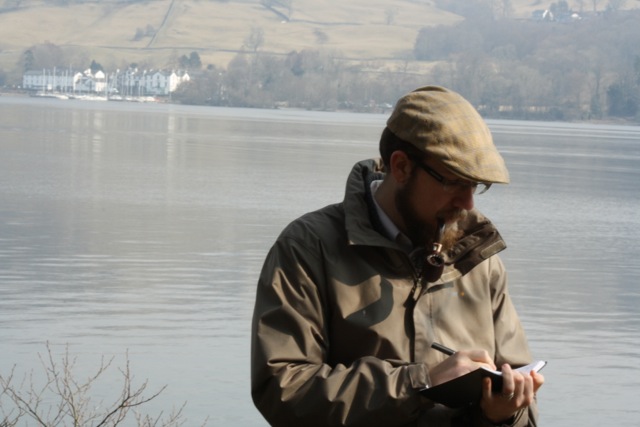 Here’s a list of my presentations and publications to date. I’m always willing to share my papers, so shoot me an email if you want to dialogue about my topics or read my papers: elflandletters@gmail.com

Being Deified: Poetry and Fantasy on the Path to God. Minneapolis: Fortress Press, Forthcoming.

‘The Deifying Trinity: How Gregory Nazianzen and Augustine of Hippo Use Deification to Explain the Trinity.’ Studia Patristica (2014) 72: 147-156.

“Is the Eucharist a Faërie Road? Reflections on Sacramental Ontology, Fairies, and the Artist. Presented at the Trying to Say “God” Conference, the University of Notre Dame 24 June 2017.

“Commonly Fed: Aquinas on the Incarnation and the Eucharist and Their Implications for the Dinner Table.” Presented at the Patristic, Medieval, and Renaissance Conference, Villanova 14 October 2016.

In the Summa Theologiae, Aquinas tells us, “for, as water is used in the sacrament of Baptism for the purpose of spiritual cleansing, since bodily cleansing is commonly done with water; so bread and wine, wherewith men are commonly fed, are employed in this sacrament for the use of spiritual eating” (ST IIIa. 74, 1). In Summa contra Gentiles, he writes, “Spiritual effects were fittingly given under the likeness of things visible (as was said); therefore, spiritual nourishment of this kind is given to us under the appearances, of the things which men rather commonly use for bodily nourishment. Bread and wine are of this sort. Accordingly, this sacrament is given under the appearances of bread and wine” (SCG 61). In both of these instances, Aquinas argues for the fittingness of the elements of bread and wine in the Eucharist on the basis that these are foods with which humans are commonly fed. This is not, for Aquinas, the sum total of their fittingness, but it is an essential aspect. Because we eat these foods most commonly (or did at any rate) they are fitting carriers for the body and blood of Christ in the Eucharist. It will be my argument that because of this implied fittingness there is a way in which we can see bread and wine, and therefore food in general, outside of the Eucharist have a participatory relationship with the Eucharist. Specifically, I will argue that, based on Aquinas’ understanding not only the Eucharist, but of the Incarnation, the analgoia entis, and the Five Ways, the food we commonly eat has been transformed by its inclusion in the Eucharist.

This paper will begin by laying establishing that for Aquinas God creates in order to share his perfections (ST Ia. 2, 3). This will establish that created things can somehow share in God’s perfections in a participatory and analogical way. Next, I will argue that for Aquinas the Incarnation has effects for all humanity, and by extension, all creation (cf. ST IIIa. 1, 1-3). This general transformation of humanity caused by the unification of human nature to the Divine in the person of the Son allows us to consider a similar claim concerning food and the Eucharist. Specifically, I will argue that by using the common elements of bread and wine as the vehicles for Christ’s presence in this sacrament––a kind of recapitulation, or continuation of the Incarnation itself––bread and wine in specific, and therefore food in general, is transformed in a similar fashion to humanity’s general transformation by the Incarnation. I will then conclude, briefly, with the suggestion that this makes all our meals participants in the meal of the Eucharist, that the altar is also rightly a table, specifically, a dinner table.

‘Avoiding Shortcuts: The Doctrine of Deification in Conversation with C. S. Lewis and the Church Fathers.’ Presented at the Centre for Philosophy and Theology’s Conference on The Soul, St Anne’s College, University of Oxford 29 June 2013.

‘The Deifying Trinity: How Gregory Nazianzen and Augustine of Hippo Use Deification to Explain the Trinity.’ British Patristics Conference, University of Exeter, 6 September 2012.

Gregory Nazianzen is well-known for his defense of the Trinity in his Theological Orations. The same can be said for Augustine of Hippo and his De Trinitate. These two authors share more than defense of the Trinity in their most well-known documents on this subject. Each author, in an attempt to give evidence for, thereby providing a defense of, the doctrine of the Trinity uses the language of deification to explain how the Son and Spirit are fully God as the Father is God and how the believer relates to them. This paper concisely and closely studies two of Gregory’s Theological Orations (Ors. 30 and 31) and book 4 of Augustine’s De Trinitate to show that, and how, these authors use the language of deification in their defense and explanation of the Trinity. For Gregory and Augustine, salvation (and salvation through deification) and how the believer is to live in light of that salvation is essential when coming to discuss the doctrine of the Trinity. That each author refers to the language not only of salvation but deification and that contemporary theologians ought to keep this in mind today is argued in the body of this paper.

‘”See I made you like God,” (Exodus 7): in defence of the incarnation in Athanasius and John Cassian.’ A Celebration of Living Theology: Engaging with the Work of Andrew Louth, University of Durham, 10 July 2012.

In Athanasius’ Orationes contra Arianos, Athanasius uses Exodus 7:1 and Psalm 81:1 (LXX) to argue that the Son must have always been divine and the Son, in order to deify human beings. Nearly a century later, Cassian would use Exodus 7:1 and Psalm 81:6 (LXX) in his De incarnatione Christi contra Nestorium haereticum to show that the word “god” applies differently to human beings and Jesus. In both instances these Scriptures are used to defend the full divinity of the Christ.

This paper will: (i) explore the interrelation of Athanasius and Cassian; the arguments made by Athanasius and Cassian and how they compare; (ii) note how the new context of Pelagianism and Nestorianism leads Cassian to shift theological emphases; (iii) noting that while Cassian does not use Athanasius’ language of deification, from this and other passages it is clear that Cassian subtly assented to the notion of deification.