It Only Took 10 Years 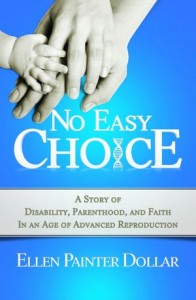 This month my book, No Easy Choice: A Story of Disability, Parenthood, and Faith in an Age of Advanced Reproduction, will be released. As with nearly any book, particularly a first one, the journey to this milestone was a long one.

It started 10 years ago when, in 2002, Daniel and I decided to use preimplantation genetic diagnosis (PGD) to try to conceive a child who would not inherit my disabling bone disorder, osteogenesis imperfecta (OI), which causes fragile bones and other symptoms. Our first child, Leah, did inherit OI, and sustained six fractures between her second and fourth birthdays, along with having significant motor development delays. We knew we wanted another child, but the prospect of raising two fragile children was daunting. So we embarked on the tangled, twisted, disorienting path into the world of assisted reproduction.

I will be forever grateful, however, for one significant exception to this pattern—our friend Chris, a Christian ethicist who converted to Catholicism after being raised by a Baptist preacher father. Chris and I discussed the ethical questions raised by reproductive technology via e-mail over a several-month period, as Daniel and I went through the grueling procedure. Chris raised and answered questions, prodded me to think more deeply about things that had never occurred to me, and throughout our conversation, promised to offer friendship and support no matter what we did.

About two years later, after going through a failed PGD cycle and then conceiving our second daughter, Meg, the old-fashioned way, Chris suggested I write a magazine article based on our e-mail conversation. But writing about that conversation required so much back story, about my growing up with OI and our early years of raising a child with OI, that an article was insufficient. So when Meg was a year old, I began sitting down for an hour or so every afternoon, when she was asleep and Leah was in preschool, to write our story.

Then, of course, came the years of raised hopes followed by rejections that nearly any newbie author goes through. Chris introduced me to a former religion editor for Publishers Weekly. She gave my manuscript to an editor at Penguin, who said the topic was too “fraught” for an American audience. Another friend who is a well-known religion scholar put in a good word with the head of a major Christian publishing company, who called me at home to say that he would take a look at my manuscript personally. Three days after that phone call, I received a form rejection letter from a low-level editorial assistant.

And then Chris introduced me to a book publicist he knew, who suggested I send my manuscript to her friend Jana Riess, a new acquisitions editor at Westminster John Knox. Jana liked the basic premise of the book, but felt the format and other details needed work. She spent a year guiding me through revisions of my book proposal. Finally, on December 10, 2009 (Leah’s 10th birthday), I was offered a book contract.

There have been many high points along the way to publication (along with many low points….oh yes, many of those). The one that stands out most is when Jana let me know that Stanley Hauerwas of Duke University had called her (he does not do e-mail) to provide an enthusiastic endorsement. There is no better feeling as a writer than learning that an expert—someone you quote as an authority and who is widely recognized as a top person in his field—not only liked your book, but really “got” your book.

“No Easy Choice is a painfully wise book about the pain of having children whose life will be filled with pain. It is also a book of hope because its author never tries to say more than can be said about why some children are so born. This is a must read, not only for those considering prenatal genetic diagnosis and intervention, but for all concerned with the ethics of PGD. It’s a terrific book.”
–Stanley Hauerwas, Professor of Theological Ethics, Duke Divinity School, and author of God, Medicine, and the Problem of Suffering

You can pre-order No Easy Choice from nearly any online book retailer, including Barnes and Noble, Amazon, and the Thoughtful Christian. If you are local, look for an announcement about my book launch party in early February, where you can buy a book directly from me.

January 3, 2012 5 Reasons I’m Ignoring Your Healthy-Eating Advice
Recent Comments
0 | Leave a Comment
Browse Our Archives
get the latest from
Ellen Painter Dollar
Sign up for our newsletter
POPULAR AT PATHEOS Progressive Christian
1