Let All Mortal Flesh Keep Silence (Including Me)

According to the Mayans, the world was supposed to end on Friday. It didn’t. But it sure feels like a bit like the end of the world as we know it, doesn’t it? The afternoon of December 14, some friends and I remarked that it felt an awful lot like 9/11. We had that same 9/11 sense of absorbing mind-boggling tragedy and realizing that nothing would ever be quite the same. Indeed, daily routines in the week that followed the Sandy Hook school shooting felt unmoored, troubling, unsettled and unsettling.

At my kids’ school, teachers and administrators have risen to the occasion with grace and fortitude, and yet things have been chaotic, with new rules and procedures being crafted day by day, and parents confused and even angry about changes they don’t understand.

It felt wrong to be baking Christmas cookies and singing cheerful holiday tunes while also grieving (knowing that our grief is nothing, nothing, compared with the grief of families whose loved ones didn’t make it out of Sandy Hook alive). But not celebrating makes no sense either, especially with children who are much less stricken by recent events than we are.

Some writer friends and I talked about how we have struggled to get any meaningful work done, burdened as we are by sorrow, haunted by photos of 20 first graders. I feel a duty to bear that sorrow rather than chase it away, because chasing it away is a luxury those children’s families don’t have.

So what to do, what to say about Christmas Day?

I have been hearing a favorite hymn in my head for several days now, one that seems just right for this season because of its melancholy minor key as well as its lyrics. The first line is “Let all mortal flesh keep silence…”

Silence. That is how I plan to approach this Christmas Eve, tomorrow’s Christmas Day, and a few days to follow. With silence.

The days since the Newtown school shooting have been full of words, mine and others’. LaVonne Neff wrote for Sojourners, “We are talking too much, too soon. In the words of my rabbi, ‘Judaism teaches that when there is nothing to say we should say nothing….Sometimes only silence gives voice to what has happened.'”

I have been too quick these past 10 days to offer words, not just here on my blog, but in various communities of which I am a part, online and in the real world. Some of those words were the right words at the right time. And some were just chatter—self-absorbed, unnecessary, useless.

The fact that I needed to zip it (the words I use with my kids when their bickering, complaining, and noise is just too much) should have been clear in the middle of last week, when I confided to my writer friends that I was fed up with the frustrations of being a communicator—someone who naturally takes thoughts and feelings, my own and others’, and shapes them into words to make sense of our confusion. I was fed up that my kids so often fail to listen to me. Fed up with being the communicator for various volunteer projects and therefore being the person people come to with complaints and questions and annoyance. Fed up with going out on a limb by giving voice to widely shared criticisms and calls for change, and finding that life on the limb can be very lonely.

One friend responded by saying, “Being a writer means that we say things most people are afraid to even THINK…We are called to blab about this crap”—a sentiment I am considering having printed on my business cards. (Not really.) And another friend said yes, we are called to blab about this crap. But we’re also called to silence, in which we wait for the wisdom and words and guidance we need to communicate things that are difficult and challenging and painful. 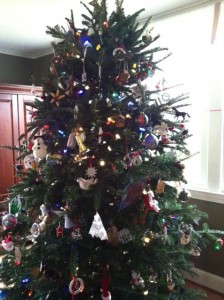 I’m taking a few days off from words, at least of the public variety. No blogging, Facebook, Twitter. I’m going to engage in on-my-knees, over-the-top gratitude for my three children, even knowing that there will be moments when they are overtired, whiny, ungrateful, and unpleasant. I’m going to eat and read and be with extended family and admire our Christmas tree. I’m going to ponder what the words of my melancholy hymn might mean for us during these sad, chaotic, confused final days of 2012. And if I come up with any great insights, I’m going to keep quiet about them…for a few days at least.

Let all mortal flesh keep silence, and with fear and trembling stand;
ponder nothing earthly-minded, for with blessing in his hand,
Christ our God to earth descendeth, our full homage to demand.

King of kings, yet born of Mary, as of old on earth he stood,
Lord of lords, in human vesture, in the body and the blood;
he will give to all the faithful his own self for heavenly food.

Rank on rank the host of heaven spreads its vanguard on the way,
as the Light of light descendeth from the realms of endless day,
that the powers of hell may vanish as the darkness clears away.

That the powers of hell may vanish, as the darkness clears away. Amen and amen. Merry Christmas to you all.

December 21, 2012
Broken Bones, School Shootings, Divine Intentions, and Why We Suffer
Next Post