Meet David, as He Blogs His Way Through Alzheimer’s

Meet David, as He Blogs His Way Through Alzheimer’s April 3, 2013 Ellen Painter Dollar

At the Potter’s House Church in Washington, D.C. (part of the former Church of the Saviour, founded by the late Gordon Cosby and his wife Mary), I worshipped with a physician named David Hilfiker. David and I were not particularly close. I was intimidated by his intellect. He once gave a sermon series parsing Rene Girard‘s work on Biblical scapegoating, of which Daniel and I remember little other than David’s frequent allusions to “mimetic desire,” which we observe oh so frequently in our children’s behavior. I was humbled by his willingness to do things that other people (including me) were not, in the name of advocating for nonviolence, poverty relief, and environmental stewardship. And David himself would agree that he is not the most emotionally accessible person—or at least, he wasn’t back then. Though we weren’t close, I admired David and have kept loose track of his writing and speaking career. His two books, Healing the Wounds and Not All of Us Are Saints still sit on my bookshelf.

But in recent weeks, I have been corresponding regularly with David and also reading his latest, perhaps most important, writing project—a blog titled Watching the Lights Go Out, in which he chronicles his days as he learns to live with a diagnosis of Alzheimer’s disease. 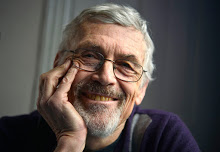 When I posted about David’s blog on Facebook a couple of months ago, another friend who attended the Potter’s House Church back in the day responded by saying that she didn’t know what to say to the prospect of such a fine and influential mind deteriorating. While I share that sentiment, I’m also moved by David’s blog posts in which he says he is not suffering, that in fact, his diagnosis has made him more emotionally open to his family and others than he has ever been. His wife, Marja, notes in a Washington Post article about David’s diagnosis and daily life in its wake,

“If someone had given me three wishes in life, one would have been ‘Just let David enjoy life more,’ ” Marja said. The disease, she added, has now given him that.

On his blog, David writes frequently of what some might call his “denial” of his situation, or his “apathy,” in that he’s not furiously seeking cures and therapies. (Many of the commenters to the Post article about David, however, are insistent that their chosen form of therapy or nutrition supplementation or drug will cure David’s Alzheimer’s. Another fine example of our cultural bias toward fixing things rather than coping with them gracefully, toward cure over and above care.)

What has drawn me to David’s blog posts, other than our shared history, is that the issues and concerns he raises about Alzheimer’s are so similar to those we discuss here about childhood genetic disorders, particularly what we mean by “suffering” (David insists that the only true suffering of his diagnosis comes when he or others worry about his future; his present, despite some clear memory and cognition lapses, is not a painful one) and the importance of accepting and coping with things as they are, rather than fighting against them. For example, he tells a story about pouring a cup of soy milk, intending to heat it in the microwave, but catching himself putting the carton in the microwave instead. While friends insist that this is no big deal, that they do things like this all the time, David notes that he doesn’t do things like this all the time. Or at least, he didn’t. Nevertheless, he asks:

So, is the present itself emotionally painful?  Actually, putting the soy milk into the microwave was funnier than it was painful.  Am I suffering as the lights go out?  Actually, very few others can tell that my lights are even going out.  And even for me, the dimmer switch hasn’t been moved very far.

No, I’m not suffering now.

I don’t think I’m trying to Pollyanna my way into denial by pretending everything’s okay.  It’s not okay.  I have Alzheimer disease and I know some of what’s coming.  After the frying pan in the freezer comes getting lost, which leads to wandering off who-knows-where, which means having to have someone monitor me, which can lead to paranoia and anger, which pushes me eventually into an institution in which I die.

The soy milk in the microwave could have pushed me into imagining the entire painful sequence.  But, this time at least, I was given the grace not to go there but to see the humor.  The future will almost certainly be painful; the present doesn’t have to be.

David is a skilled and experienced writer, but relatively new to this social media-driven blogosphere. Whether or not he feels an urgency to get his blog posts out to a wider audience, I feel an urgency on his behalf. I believe David’s writing his way through his illness—a real-life version of the bestselling novel Still Alice—is a tremendous gift, not only to those of us fortunate to know David, but to the wider world, and to our ongoing conversations about the meaning of illness and disability, and how we cope with them. Go take a look at his blog, and if you have time, read the autobiography published on his web site (the link is available via the blog). Consider leaving a comment to let David know if something he writes strikes a chord. He is mapping some uncharted territory, and I’d love him to have some more company on the journey.

April 14, 2013 A Week When Families' Stories Made the Difference
Recent Comments
0 | Leave a Comment
Browse Our Archives
get the latest from
Ellen Painter Dollar
Sign up for our newsletter
POPULAR AT PATHEOS Progressive Christian
1