The Summer When I Didn’t Cherish Time with My Kids

The Summer When I Didn’t Cherish Time with My Kids May 9, 2013 Ellen Painter Dollar

Note: I wrote this in the summer of 2009. I am reposting it here as summer approaches, as a reminder (to myself, above all) of how radically life can change us in surprising ways. I used to despise the summertime, for reasons I explain in this post. Now, I have become like a cat, chasing the sun through the day, craving its light and warmth for the relief it brings to body and spirit. Most days over the past couple of weeks, since spring has finally sprung here in New England, you would find me writing while sitting on a bench in my front yard, welcoming the full brunt of the noonday sun (yes, wearing sunscreen and a hat), reveling in its heat. This is the story of how I began to understand that summer could be redeemed for me, and the story also of how such redemptions can be hard-won when you live, as we do, with a capricious chronic illness.

I feel about summer the way a grieving widow must feel about Christmas. We are both bombarded with images of a culture immersed in traditions and activities that we either cannot or don’t want to be part of. January’s frigid monotony and September’s frenetic back-to-school pace promise relief after so many weeks of observing other people’s joy from inside our bubbles of grief and regret.

Unlike the widow, I have lost nothing so vital as an actual person. Everyone I love most is right here—my two daughters, my son, my husband. My summer mourning stems not from death but from disease—osteogenesis imperfecta (OI), the brittle bone disease that my oldest daughter, Leah, and I both have.

My repeated childhood surgeries to replace the metal rods that stabilized my leg bones were scheduled in the summer to minimize school absences. I spent many bright days lying in a hospital bed in our den, encased in plaster from chest to toes. Summers without surgery were better, but fractures happened without warning and with little provocation—a slip, a misstep, an awkward fall. I have photos of me on a Cape Cod beach, a leg or arm in a plaster cast wrapped in a plastic garbage bag to protect it from water and sand. With pain and plaster as much a part of my summers as sun and sand, I observed lengthening days and rising temperatures with a subtle dread.

I broke my legs and arms about 35 times before my eleventh birthday; I have not had any major fractures in the 30 years since. But into adulthood I retained my dismay at summer’s approach. Heat intolerance and excessive sweating are two of the more annoying symptoms of OI, so even as I began spending summer weekends hiking with my boyfriend, now husband, I continued to count the weeks until September’s fresh breezes would lift August’s soggy torpor, until October’s frosty mornings would allow me to cover my scarred legs with jeans and my crooked spine with bulky sweaters.

Motherhood proved to be the only force powerful enough to chip away at my stony refusal to embrace the season that symbolizes freedom—from school, heavy clothing, rigid schedules, stale rooms. I did not realize how seasonal mothering would be. Our daily activities—from how we get to the bus stop in the morning to whether my fall-back dinner is pasta or burgers on the grill—depend largely on whether it is hot or cold, sunny or rainy, muddy or windy.

Many of summer’s rituals are highly stressful when you have very small children. Think nursing an infant in an unshaded playground while watching a toddler who can’t quite be trusted on the climbing equipment, or supervising three children with vastly different swimming skills, from nonexistent to pretty good. For those first years of motherhood, I still gratefully anticipated colder weather so at least my children could endanger themselves in the familiar confines of home, where there was always the TV or a strong cup of coffee available when things got a little dicey. 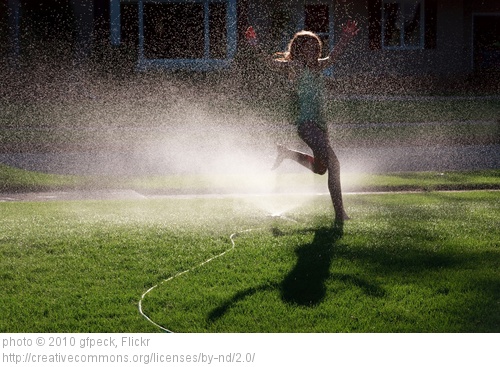 But last summer, with my children two, four and eight years old, I began to understand why some parents actually like summer. With everyone capable of coordinated, independent movement, the beach and the playground were not such fraught places. Our days began without the weary nagging and expert foot-dragging that make school mornings so unpleasant.

So this year, for the first time in my life, I dared to look forward to summer. But then, in mid-June, Leah fell off her scooter and broke her left femur (thigh bone) and right humerus (upper arm bone)—the eighth and ninth fractures of her life. After an ambulance ride, surgery and three days in the hospital, we brought her home to recover. She was in terrible pain and prone to anguished laments over all she had lost: a vacation, time with cousins, summer camp, the final two weeks of third grade, independence, control, the idea that life could ever be fair.

In some ways, those early days of her recovery, when I neglected housework and we ate whatever food friends had left in my refrigerator, were easier than those that followed. Leah’s pain lessened and she began scooting herself around. The rest of the world jumped into their summer plans—and we were still here at home, with hardly any plans at all. I couldn’t even take the children to the grocery store with me: How would I push my daughter’s wheelchair and a shopping cart at the same time?

We survived by inviting friends over, occasionally venturing out for ice cream. We did crafts, played games, watched a lot of TV. Good friends, that most precious resource for mothers struggling to keep it all together, dropped off scores of DVDs and books, taught Leah to knit and do origami, and stayed with my kids so I could get out now and then. When I say the help of friends and my parents kept me sane, I am not just using an overdramatic figure of speech. Some days, I felt I could not stand one more minute trapped in this house with these children; knowing a friend was coming over so I could go swim laps kept me from abandoning my children to the TV and retreating to my bedroom to sleep the dull hours away.

Driving past the town tennis courts during a rare foray out of the house in July, I saw a young boy, around 11 years old, practicing his serve. I hated that little boy for embodying everything Leah, and the rest of us, were missing—spontaneous activity, exercise in the sun, freedom from watchful adult eyes. My hatred didn’t make any sense, any more than it would make sense for that grieving widow to hate me for making six different kinds of Christmas cookies. But this summer wasn’t making sense either. I wished it were February, because we were stuck in a February sort of life, one lived indoors, embracing creature comforts in a failed attempt to make up for a lack of sun, water, grass, sand and sweat.

Illness and disease bring with them physical agony—following Leah’s accident, I witnessed plenty of that—but disability goes beyond pain to separation. For years, my brittle bones separated me from the freedom and engagement with the outdoors that defines summer for so many people. Leah’s accident severed the shaky connection I was beginning to make between warmer weather and a more forgiving family life.

I am counting the days until Leah will begin fourth grade (I had hoped she would be on her own two feet, but it looks like she’ll have crutches for a while), Meg will go to kindergarten and Ben will start preschool. I imagine the school doors swallowing them up and my returning to an empty house to do as I wish, free of the mocking presence of sun and heat, the oppressive weight of bored children.

In wishing this summer away, I am defying the counsel of older women who admire my children in the grocery store and pool locker room. They plead with me to treasure this time, because it will go so fast. I suspect such exchanges are so frequent and urgent because these veteran mothers were unable to do what they are asking me to do—cherish every moment with young children, even those marked by boredom, discontent and unappreciated labor. I wonder if, now that these mothers live ordered lives in quiet houses, they still carry guilt over those times they wanted nothing more than to be free of their children, with their endless needs.

Maybe this is another impossible ideal of motherhood, like changing and ironing the sheets weekly or never yelling, that fosters pointless guilt and needs to be revised into something more attainable. Treasure your children when you can, and the rest of the time, muddle through and try to minimize the damage.

I love my children. I love being their mother. It is the best job I’ve ever had, and more—the defining work of my life, my calling, a wellspring of delight, gratitude and wisdom. But I cannot treasure this broken season, only brief moments of it here and there—a trip to a cherry orchard, Leah picking the low-hanging fruit from her seat in a wagon; a backyard campfire; watching fireworks with friends; arriving at our Cape Cod rental cottage at the tale-end of August and hearing Leah say, “I can’t believe I’m finally here. This must be a dream”; watching her bob for hours in the chilly waters of Nantucket Sound, no pain, no labored limp. I add my regret over wishing this time away to the cascading pile of regrets I have collected this summer—all the ways I wish things had turned out differently. I crave the cool autumn days, not only for their blazing leaves and energizing fresh air, but because they will signal, at last, an end to this, my unredeemed summer.

May 8, 2013
Articulating the Mystery of Faith: Christian Wiman's "My Bright Abyss"
Next Post