This headline from the Huffington Post: “8 Ways Screens are Ruining Your Family’s Life.” Ah, nothing like a good dose of hyperbolic hysteria to get an audience riled up! You, with the TVs and laptops and smartphones: Betcha didn’t know you were ruining your family’s life, did you? 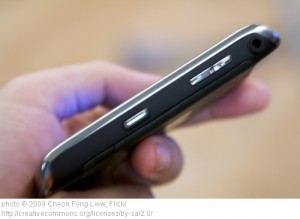 This is a popular bandwagon to climb aboard these days, with new anti-screen arguments, articles, and web sites, many directed at parents, popping up regularly. A viral YouTube video by Charlene Guzman follows Guzman through a day without her smartphone, as she observes the odd, anti-social behavior of those whose phones are front and center—a man kissing his girlfriend on the beach while holding his phone at arm’s length to take a photo, a lunch with friends in which everyone but Guzman is either looking down at their phone screens or holding their phones up to share tweets or photos with the others.

The HuffPo piece portending family ruin focuses on research conducted by Catherine Steiner-Adair, EdD, who “interviewed more than one thousand children between the ages of 4 and 18 to find out how technology was impacting their relationships and their social and emotional lives.” The research provides some insights that are helpful for parents (for example, kids see parents as hypocrites when we go on and on about rules for phone and computer use, and routinely break them by, for example, taking calls during dinner). Our cultural infatuation with digital content certainly requires parents to be knowledgeable, cautious, and clear about the benefits and pitfalls of devices with screens. I am not, however, convinced that screens are “ruining” family life.

Digital critics like Guzman and Steiner-Adair are right to critique abuses of screen devices. The lunching friends who ignore Guzman as she vividly recounts a story to stare at their phones are just plain rude, as are people who routinely interrupt conversations to take phone calls. Of course children shouldn’t spend entire summer days indoors playing video games, and parents shouldn’t pick up their kids from school every single day with a cell phone glued to their ear.

But so many diatribes against digital diversion go beyond a reasonable critique of bad behaviors, using scare tactics (letting your toddler watch TV will irreversibly scramble her brain!) and holier-than-thou guilt trips to demonize digital devices, while failing to note how such devices can actually enhance relationships and family. Yes, I said enhance. Here are some ways that digital devices have not only NOT ruined my family’s life, but have instead supported a relatively happy, healthy, and sane family and household dynamic.

TV in toddlerhood saved my sanity, and did not fry my kids’ brains. Between the ages of approximately one-and-a-half and five-ish (when they went off to full-day kindergarten), my kids watched somewhere between one and three hours of television on many days. Yes, I used TV as a babysitter. While they watched TV, I did chores or writing. Sometimes I read People magazine over a leisurely lunch. You’ve heard the saying, “The days are long, but the years are short”? Well, those toddler-to-preschool days are reeeeeaaaaalllllly long. All of my children were early risers, up around 6, so we’re talking 14-hour days. I took them with me on errands. I planned play dates. I took them to playgrounds, parks, and pools. And I let them watch TV because we needed a break from each other, and because I had things to do that were not aided by the “help” of a two-, three-, or four-year-old.

Today, my kids watch little TV; they don’t have time between school and extracurricular pursuits. They are bright, curious, and attentive, earning raves (and good grades) from their teachers. They love to read, draw, engage in imaginative play, and make music. There is no evidence that watching a couple of hours of TV every day in their younger years has hurt them at all. If I had to guess, I would guess that is because of all the other stuff we did in addition to allowing them to watch television. We read to them every day. We ate dinner together almost every night. On weekends, we took family hikes or trips to local parks and museums. We fostered an environment that encouraged conversation and curiosity—an environment that appears to be far more influential than the hours of Dora, Backyardigans, and Zaboomafoo we allowed them to watch.

I sometimes pay more attention to my phone and laptop than my kids. Get over it (they mostly have). As my colleague and friend Caryn Rivadeneira so aptly described in blog post for Her.meneutics, parents who work from home, particularly in the online-oriented world of blogging and publishing, rely on our smartphones to get our work done and be available to our children. Caryn writes,

not all of us glancing down at our phone screens are trying to escape, relax, or ignore our kids. One friend, also a write-from-home mom, calls her smart phone a “life tool.” It’s the tool we use to live out our various callings. Mine allows me to raise my kids, manage various freelance and writing projects, and stay on top of my part-time [job].

So, yes, sometimes we step away from watching a gymnastics class to make a last-minute change to a blog post. Sometimes we’re answering e-mails while the kids splash in the pool. We’re not choosing the vapid temptress of online interaction over our flesh-and-blood children; we’re working. And when I hold up a finger to say, “Wait a sec,” when a child comes in to ask for help with something just as I’m finishing a proofread, I’m not selfishly ignoring my children’s needs, letting their precious childhoods waste away without the constant attention they deserve from their mom. I’m reminding them that I do valuable work other than taking care of them—work that has responsibilities and deadlines. Also, it’s rude to interrupt.

I am grateful that my work schedule allows me to be available to my children after school and in the evenings. But that doesn’t mean they get my undivided attention at every moment. I hope this dynamic helps them learn Life Lesson #1: It’s not all about you. Steiner-Adair warns, “Your kids hate your screens,” because of how they steal away our attention. Yes. And my kids hate when I’m on the phone when they have a question. They hate when I’m having a “boring” conversation with a friend in the grocery store aisle. They hate when their favorite jeans aren’t clean, when I tell them to go back and brush their teeth for real this time, when I refuse to fix macaroni and cheese just because they don’t like what’s for dinner. It’s okay. They’ll get over it.

Choosing digital interactions over human ones now and then can help smooth the choppy waters of family life. Steiner-Adair warns that adults, just like kids, can use digital devices to “avoid interaction.” Well, yes. Sometimes avoiding interaction is precisely what we need to calm the family dynamic. When my two youngest kids can’t stop bickering (and hitting), an episode of “Phineas and Ferb” watched together or computer games played separately can provide just the sort of non-interactive down time they need to start acting and treating one another like human beings again. My oldest daughter routinely ends her day watching funny YouTube videos on her smartphone and texting her friends. We hear her giggling in her bedroom; I think it’s a terrific way to end a fully loaded teenager’s day, with laughter. I take breaks from both my writing work and the enervating constancy of conversation in our chatty household to scroll through Facebook or play a few rounds of Bejeweled on my phone. Trust me—it’s good for everyone for this mom to occasionally “avoid interaction.” When I don’t, bad things happen. Loud, explosive, angry things.

As with most things that provide sustenance, satisfaction, and pleasure (work, novels, jellybeans), I can overdo digital distractions. But the problem lies with me, not with screens or their content. As journalist Paul Miller discovered when he gave up the Internet for a year, the problems that he experienced in his online interactions remained, albeit in different forms and contexts, in his offline life.

If, in my daily interactions with various screens, I am sometimes compulsive, temperamental, or self-absorbed, that’s because I have compulsive, temperamental, self-absorbed tendencies—tendencies as apparent when I ignore my work and family to lose myself in a novel as when I keep clicking over to Facebook rather than finishing a writing project or starting dinner. In my experience, “screen time” of many sorts—from my online writing to an email reminder to my husband to pick up the girls from choir, from a rousing family game of Mario Kart to a quick “Thinking of you today” text sent on the first day of school to a friend who has just returned to full-time teaching—enhances a healthy life marked by worthwhile work and sustaining relationships. There are many forces that can ruin a family’s life, including terrible behavior perpetrated both online and off, but screens aren’t one of them.

September 4, 2013
The Brilliance and Beauty of a Marriage, Lost (& Found) in the Mess of Everyday Life
Next Post

September 6, 2013 [Snapshots from Oak Ridge] Summer and Fall in Tandem
Recent Comments
0 | Leave a Comment
Browse Our Archives
Follow Us!

They Are Not Wanted
Groucho Marx once said, "I would never join a club that wanted...
view all Progressive Christian blogs
What Are Your Thoughts?leave a comment
Copyright 2008-2020, Patheos. All rights reserved.