“We can just love them”: Adoptive Parents on Their Kids with Special Needs 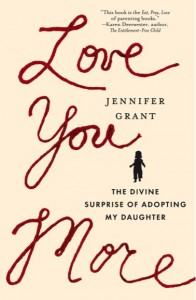 In honor of National Adoption Month, I’m featuring below an excerpt from Love You More: The Divine Surprise of Adopting My Daughter by Jennifer Grant. Love You More tells the story of how Jen and her husband David adopted their fourth child, Mia, from Guatemala. The book also does an excellent job of addressing questions, concerns, and myths about adoption. I was especially impressed with Jen’s discussion of some of adoption’s ethical quandaries, such as the fact that grinding poverty, not lack of parental desire, motivates some birth parents to relinquish their children. I have recommended Love You More to several friends who have adopted children, and they all found it honest and true to their own experiences.

In the excerpt below, Jen talks to two mothers whose children have medical or genetic conditions. If you like what you read here and want more, head on over to Amazon, where you can get the Kindle version of Love You More for only $1.99, in honor of National Adoption Month.

I recently met Pam Blackburn, a mother and social worker who, like me, has a blended family or children both by birth and by adoption. Two of Pam’s children by adoption are daughters in their mid-twenties. One of them, Melissa, has cerebral palsy and is paralyzed. The other, Hannah, has Down syndrome and autism. Both sisters are nonverbal; Pam knows that no one will ever be able to grasp completely what they are truly thinking about or feeling. But she watches them closely, interprets what she believes they are trying to communicate, talks to them and cares for their needs.

I double-dog dare you to say that to her.

“If there is anything I would love people to know about people who have adopted kids with special needs it is that we are not saints,” Pam said. “We aren’t perfect. We make mistakes. We get angry and frustrated. We laugh and cry. We have joys and challenges – just like all parents.”

Sometimes people remark that her girls are fortunate that she chose them. “I get fired up about this because, first and foremost, all children are chosen,” Pam said. “Abortion and birth control are our rights; people can choose them. I’m not saying I advocate abortion, but it is a choice. Placing a child for adoption is also a choice. So, in my mind, if you are raising a child, whether she came to you through adoption or birth, that child was chosen.”

Pam also bristles when people say how lucky her children are that she adopted them. Strangers don’t seem to believe her when Pam says that she is the lucky one. She considers herself blessed to be their mother and said that Melissa has taught her “how to love, laugh and appreciate life.”

She does not feel sorry for her daughters; she delights in them.

And what about HIV-infected children? Isn’t adopting a child with HIV tantamount to choosing the grief of burying your own child? Nope, not anymore. I spoke to Margaret Fleming about a year ago after three of her children, all of whom were adopted, had just started kindergarten. While mothers of typical kindergartners fret over whether their kids can count by twos or color within the lines, Margaret had an additional set of concerns. More crucial than her kids being able to tie their shoelaces or hold a pencil properly to Margaret are the results of regular blood draws that track CD4 counts and viral loads. Margaret’s kids are HIV positive.

Margaret is the founder of Adoption-Link, Inc., an agency in Oak Park, Illinois, through which she had placed hundreds of children, many who have special needs. It was in 2002, on a visit to meet her now nine-year-old daughter, when her eyes were opened to the crisis of children and HIV. On a visit to Vietnam, Margaret encountered a hospital ward full of children who had tested positive for HIV at birth. “The HIV ward was the hottest and most inaccessible floor of the hospital,” Margaret said. “There was an old fan turning, covered in cobwebs. The babies rocked back and forth all day long. They just sat there, never cried, never fussed. There was no music, no sound, and only a few broken plastic rattles.”

She said the caregivers held the babies at arm’s length, seemingly afraid to bring them close for fear of becoming infected with HIV themselves. On the back of the infants’ shirts, written in indelible black marker, was “HIV.”

According to a UNICEF report, globally about 370,000 children younger than 15 years old became infected with HIV in 2007. Most infections occur during birth or through breastfeeding. Many of these children are orphaned when their parents die of AIDS. Margaret said that a high percentage of the children languishing on the HIV ward on that day were not, in fact, HIV positive. “They probably just had the antibodies,” she said. Because infants keep their mothers’ antibodies in their bodies for more than a year, standard HIV tests given to newborns yield positive results, even when children are not infected. HIV positive babies are said to “serorevert” if subsequent HIV tests are negative; this occurs most of the time.

On returning to the U.S. from Vietnam, Margaret created an adoption program for children with HIV. “I vowed I would do something to make a dent in this AIDS pandemic,” she said. Already the mother of five children by adoption and in process to adopt one of the children on the ward, Margaret established “Chances by Choice,” a program at Adoption-Link which facilitates the adoption of children who are born with HIV. It was the first program of its kind, but now many agencies offer HIV programs.

To date, Chances by Choice has placed close to 60 children with HIV with adoptive families. Prospective parents who want to adopt a child with HIV are usually directed to Adoption-Link’s international program; it is very rare that a child in the U.S. is infected with HIV. Margaret said Chances by Choice’s Haiti program is “going great guns.” The agency works with an orphanage outside of Port-au-Prince where many HIV-affected children live.

Adopting a baby who is HIV-infected is not equivalent to adopting a child with a death sentence. With proper nutrition, medication and love, the child thrives. Some families, such as Margaret’s, are very open about the children’s HIV status. Others alert teachers or caregivers, but do not make it generally known. Children on strong antiretroviral medications have such low viral loads that although parents should take precautions like wearing rubber gloves when cleaning a cut, the fragile virus is very, very unlikely to infect anyone else.

Margaret’s children with HIV are responding well to a regimen of anti-retroviral medications. “They take their medications twice a day. I say, ‘Who wants to go first?’” Margaret said. She said that one of the medications tastes like gasoline, but following it with a spoonful of something sweet, such as chocolate pudding, eases the aftertaste. “We grind up the pills and call it the magic dust.” To manage their HIV, the children also have blood draws every three months to determine their viral load and to get a CD4 count to discern the strength of their immune systems.

The children are living normal, healthy lives, zipping around their house with doll strollers and making Batman toys fly through the air. Their mother is concerned about the long-term toxic effects of strong medications on her children’s livers, but said that “many people don’t understand that there are all kinds of medicines now and if people adhere to the regime, they’ll be fine.” She admits that she doesn’t know what course her HIV infected children’s health will take. “We do a lot outside, have a lot of fun. We can’t know what’s going to happen. We can just love them.”

To live in the moment, to celebrate my children in all of their complexity and to live by faith are all goals of mine. And I learn something about what it looks like to accomplish them when I look at people like Pam and Margaret, women who delight in their kids with “special needs.” While sometimes those of us whose children are “typically-developing” hang expectations on them the way some people put great clumps of tinsel on a Christmas tree, obscuring its real beauty, parents of kids with special needs seem more ready to stop and look at their kids and appreciate their unique gifts.

November 14, 2013
The Mass Shooting You Probably Don't Know About
Next Post

November 21, 2013 Should Able-Bodied People Ever Use a Handicapped Bathroom Stall?
Recent Comments
0 | Leave a Comment
Browse Our Archives
Follow Us!

Why are so many Christians such...
John Shore
Related posts from Ellen Painter Dollar