Lessons from the Renovation

Our kitchen renovation has been going on for one entire day, and I’m already tired of it. I just don’t enjoy feeding a family of five from a cramped corner of the living room, where food and utensils and the coffee maker are randomly piled on two card tables. OK – That right there is the only time I’m going to publicly complain about the inconvenience of a kitchen renovation, because being able to do this is a huge luxury and complaining about it definitely qualifies as a “first world problem.” Instead of complaining, I’m going to focus on what I’m learning from this experience. And yes, a whopping 36 hours into it, I have learned some things!

1. Tearing things down is much faster and easier than building them up.

Yesterday morning, we had a kitchen. By 5 p.m., we had this: 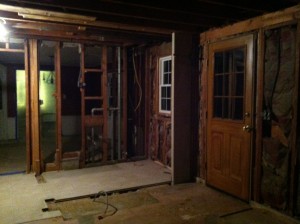 One day to get rid of a 50-plus year old kitchen! But it will take 60 days to build our new kitchen. Tearing down is much easier than building up—a truth I can apply to so many other areas of life. A sarcastic quip to a pestering child is far easier than stopping what I’m doing, starting a conversation, and figuring out why said child is bored or frustrated and therefore pestering. Complaining about what I don’t like is much easier than contributing to positive change. Spending the morning clicking through quasi-news stories that reinforce my biases is lazier than putting in the hard work of writing something original. I wish it weren’t true that tearing down is easier than building up—the overly optimistic me wants to believe that it won’t possibly be two months until I have a kitchen—but it is.

2. Sometimes, giving into the chaos is the better way.

In general, I believe that organization and orderliness help smooth life’s rough edges. While my house is never spotless, I maintain certain routines—doing the dishes after every meal, sorting through the mail every day, doing the laundry from start to finish (including folding and putting it into each family member’s room) every Monday and Thursday—to keep things reasonably neat and organized. But I have quickly realized that I have to lower my standards (way, way low) for the duration of this renovation. Our living room has gone from the least-used room to the center of everything. We’ve set up a temporary kitchen, with fridge, microwave, toaster oven, coffee maker, plates and utensils, and food, in one end of the room. We permanently moved the piano from the dining room to the living room. The wood floors are already dulled by snowy footprints of family members coming in through the main door (right next to the living room) instead of the kitchen. If I tried to clean any of this up, it would be dirty again in an hour or two. So for the duration of the kitchen renovation, I’m letting the living room go to pot. I’ll wash dishes once a day (in the bathtub upstairs) and keep food and papers organized enough that we can find things, but that’s it.

Learning to live with chaos has been the most important coping mechanism I’ve developed as a parent. Some of the worst temper tantrums I’ve had as a mom (yes, parents have them too) were when I overreacted to chaos that I could have chosen to live with—messes in rooms that are not mine, or kids playing in ways that were utterly age-appropriate but kind of messy. Kids need limits, and they need to help take care of the home we share. But unlike the mythical parents in the Pottery Barn catalog, I gave birth to human beings, not adorable automatons who play serenely with their old-fashioned wooden toys while dressed in adorable matching clothes in immaculately decorated, color-coordinated rooms where every toy is sorted into its clearly labeled bin. Human beings create chaos. That’s part of our story from the beginning; Genesis (and the whole Bible, really) is essentially the story of God creating a gorgeous, ordered, pristine world and human beings mucking it up. Sometimes, living with the inevitable chaos makes for a calmer internal life. With this renovation, I’m learning to overlook the (blessedly temporary) chaos of an overused, underorganized living room. I can clean the living room in April. In the meantime, my kids still need an engaged mom, my husband needs a wife he actually wants to spend time with, my writing needs a focused creator—I can’t do any of that if I’m obsessing about the mess.

3. I can’t make life easy for everyone, so I might as well stop trying.

The kids have adjusted easily to the new routines of having a kitchen under construction. The pets—not so much. The dog scratches with furrowed brow at the closed door separating her from the torn-up kitchen. The kitchen door is the only one she’s used to using. She has not yet made peace with the idea of going out the central door, even though it’s more accessible and she has used it before. The cat wanders around, meowing incessantly, even though we’ve shown her where her food and litter box have been moved—and know she has used both in their new locations. I was getting worked up about the pets’ confusion last night. Then I realized that I’ve done everything I can. They’re going to be confused and unhappy for a few days. And then they’ll probably be confused and unhappy for another few days in April when the new kitchen is done and our routines change again. There’s not much I can do to ease their way. This made me realize how much of my daily energy goes into easing the way for everyone who lives here, human and animal. It made me realize that easing other people’s (and creature’s) way is really not my job much of the time. This is a relatively easy lesson to learn with confused animals. It has been and will be much harder when the problem is with a child who is deeply unhappy or making terrible decisions.

So, as with anything that shakes up our routines, I’m learning things from running a household without a working kitchen. Mostly, I’m learning that I can’t wait to have a new kitchen.

February 4, 2014
God Does Not Make Me Happy (or Three Things I Learned About My Relationship with God)
Next Post

February 10, 2014 Ode to a Minivan
Recent Comments
0 | Leave a Comment
Browse Our Archives
get the latest from
Ellen Painter Dollar
Sign up for our newsletter
POPULAR AT PATHEOS Progressive Christian
1