Why I Believe Native American Mascots Should Go

My husband and I are fans of Washington, D.C.’s football team, which means we (especially my husband—I’m a fan because he’s a fan) have spent two decades of football seasons being disappointed.  We are grateful, however, for the increasing pressure being put on the NFL and the team’s owners to get rid of the team name because it is linked to our nation’s sad history of stereotyping and mistreating Native Americans. 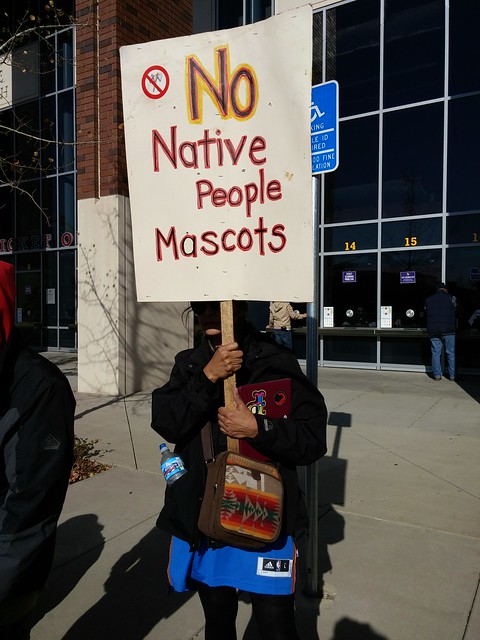 I have also become active in local efforts to retire the Native American mascot of my high school alma mater, Conard High School in West Hartford, Conn. (which is also where my oldest daughter is a freshman). Our mascot, the “Chieftain,” is not a clear pejorative, as “Redskins” is. Those opposed to retiring the mascot argue that a “chief” or “chieftain” is an honorary title common to many cultures. True enough.

The problem, however, is that our Chieftain name is used hand in hand with a stylized picture of a Native American chief dressed in a feathered headdress common to Plains Indians, even though we live in New England. The problem is that, while the school no longer officially condones cheerleaders dressed in quasi-Native clothing, students and other supporters still come to sporting events with faces marked in “war paint.” The problem is that our Chieftain mascot is based on stereotyped, inaccurate representations of a culture that has been overpowered, mistreated, and misunderstood. The problem is that around the country and right here in central Connecticut, Native tribes and organizations have called for Native American mascots to be retired. (Interestingly, leaders of the Mohegan tribe—a federally recognized tribe in southeastern Connecticut that runs a large casino/hotel business—told Conard student council leaders that they don’t oppose Native mascots outright, and have even helped area schools rework their mascots by, say, replacing representations of actual Native people with stylized feathers. The Mohegan leaders did tell the students, though, that they oppose students dressing up in Native clothing in shows of school spirit. I’m guessing that the Conard representatives failed to tell them about the “war paint” that shows up at school sporting events.)

I wrote about why I support the retiring of my alma mater’s Native mascot in a recent Hartford Courant op ed. I’m also sharing, below, an article written by Conard student Leah Kelly, reprinted from the Conard High School newspaper, the PowWow (sigh). As long-time readers know, I put a lot of stock in learning about issues by listening to real people’s stories. This is the story of a young woman whose views about the Conard Chieftain mascot have changed. I love this story not merely because it supports my position, but because of the light it shines on how we learn, how our vision changes, and the openness to experience that is a necessary part of being an artist.

If you are a local friend or fellow Conard alum, I hope you share this and let the Board of Education know that it’s time we replace the Chieftain mascot. I hope that readers elsewhere will learn more about Native American mascots that represent their area schools or favorite sports teams, and help bring an end to this practice.

Recently, I had the fortune of interviewing Quyen Truong, review and evaluation eoordinator with the North Central Regional Mental Health Board, part-time artist, and a Conard 2001 graduate. She received a BA in visual arts from Brown University. During her years at Conard, Truong was recognized by her peers and teachers as a talented artist. Her artwork was so widely appreciated that the school administration requested that she design several of the Chieftain logos that remain at Conard today.

“I took pride in being asked to depict the Chieftain,” says Truong. “I was asked to create original Chieftain artwork for the yearly agendas. I created Chieftain logos for track and cross country shirts. In addition, I was commissioned by the head football coach to create a clay Chieftain head that I believe still sits in the trophy case at Conard.”

Over time, however, Truong’s opinion of the Chieftain changed dramatically. “When I went away to college, I started meeting Native Americans,” she recalls. “I started to question the premise of ‘honoring’ people that I didn’t actually know. I started to feel uncomfortable about the use of Chieftains as the Conard mascot. I realized that putting people on a pedestal as a mascot dehumanizes them. Far from honoring Native Americans, using Chieftains as mascots objectifies people and perpetuates myths and ignorance about indigenous culture.”

She remembers that growing up as an Asian-American in West Hartford was difficult. In this way she believes she is better able to relate to the Native American community. “In high school, I felt unable to articulate my frustrations with growing up in a mostly Caucasian community when Asian stereotypes were imposed on me. Now, I realize that there were no Native American voices to speak up against the Chieftain mascot. In the same way that I found Asian stereotypes offensive, I now find Native stereotypes damaging.”

Truong isn’t finished here. She has a lot to say about her past and present beliefs, as well as what she would do if she were a Conard student today. “I want to talk about privilege and race a little bit. I think there is a connection here with what’s going on in Ferguson. I think rifts in understanding and compassion start with micro-aggressions. Using the Chieftain mascot without consulting Native Americans and then saying that we are honoring them is at best willful ignorance.”

Truong has had years of experience to consider the problematic circumstances surrounding Native American mascots and how they reflect our beliefs as human beings. Long after creating the Chieftain logos and receiving much recognition and praise, she feels regret over her past naïveté. Although she still has plenty of Conard pride, she no longer believes that an Indian head logo should be the center of that pride.

In the end, she has come to one conclusion: “To honor someone is to give them equal rights, equal access, and equal voice. We fail to honor Native Americans when we perpetuate racial stereotypes. As a high school, Conard should uphold educational principles, not ignorance. To do so, Conard must recognize the problematic basis on which our mascot was established and honor Native Americans by abolishing the Chieftain as a mascot.”

Leah Kelly is a sophomore at Conard High School who is interested in activism. She hopes to continue speaking up for important causes and working to make the world a better place.

January 29, 2015
The Perfect Pair of Boots and the Essential Work of Parenting
Next Post

February 9, 2015 Why Even the Smallest Good Work is Worth Doing
Recent Comments
0 | Leave a Comment
Browse Our Archives
Related posts from Ellen Painter Dollar