Finding Common Ground on Abortion: An Interview with Charles Camosy

Note from EPD: This is the transcript of an interview conducted by my friend and colleague Karen Swallow Prior, professor of literature at Liberty University and author most recently of Fierce Convictions: The Extraordinary Life of Hannah More – Poet, Reformer, Abolitionist, with Charles Camosy, author of a groundbreaking new book on abortion. I find Camosy’s approach to this divisive issue refreshing and hopeful; given my personal and professional interest in disability, I especially resonate with his remarks that we “resist choosing between vulnerable populations,” and not consider the ending of suffering as our “trump value.” Please also note that if, like Camosy, you believe that ethical issues raised by reproductive technology “need their own book,” I’ve written such a book! You can learn more about it here. 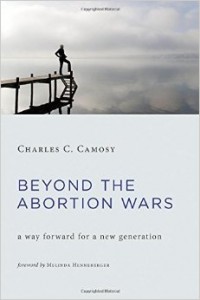 A new book offering a fresh perspective on the abortion debate, Beyond the Abortion Wars: A Way Forward for a New Generation, released this month. I asked its author, Charles Camosy, professor of ethics at Fordham University, a few questions likely to be of particular interest to readers of this blog. You can find the book here and follow find Charles on Twitter at @nohiddenmagenta.

KSP: I am pro-life and my friend Ellen Painter Dollar, host of this blog, is pro-choice. We have had fruitful dialogue about both the differences and similarities of our views. So let me begin with this question: what do you think are the most fruitful areas of common ground for good-willed, passionate folks like Ellen and me?

KSP: What do you think in your book will resonate most with pro-choice readers?

CC: Well, first of all, I hope they feel as if I’m respecting their point of view in the spirit of intellectual solidarity. I hope they feel as if I’ve taken the time to understand why they hold the point of view that they do. Too often, an abortion ‘debate’ is merely an instance of lobbing rhetorical bombs at each other. Even getting to the point where we can fully understand why someone has the different view that they do is a huge improvement in the discourse.

Second, I’m a feminist. My doctoral advisor in graduate school was a feminist. The most import thinker I rely on in the book is a feminist. I have a whole chapter in the book simply devoted to the question of what broadly-accessible abortion has meant for women…and for men. Readers here may disagree with my conclusion that our abortion policy was set up by men in order to benefit men, but I think they will likely agree that simply giving women abortion—to the exclusion of equal pay for equal work, affordable child care, increased legal protection from discrimination, and mandatory paid paternal leave—has not brought with it freedom or equality.

KSP: Even so, you remain a committed pro-life Catholic. What is the undergirding for you in that position?

CC: Pro-life Catholicism asks that we resist choosing between vulnerable populations. In Matthew Chapter 25 Jesus gave us a long and diverse list of the kinds of people to whom we need give special attention…or as we say in Catholic social thought, a “preferential option.” The hungry, naked, stranger, prisoner, etc. It seems that there are two vulnerable populations to defend and support when it comes to abortion: the prenatal child and her pregnant mother. We need to prefer both of them relative to the powerful in a consumer culture (again, most often they are men) who measure everything in terms of capital production and “value.” Each every one of “the least of these” among us requires special protection—especially when their dignity is inconvenient. We shouldn’t paper over the tough cases in which it is difficult to have a special concern for both groups, but I argued that we should commit to the full social equality of women and their prenatal children.

KSP: Of course, as you said above and address in your book, this line of discussion points to the outdatedness of the “pro-life” and “pro-choice” labels. Can you say something more about this?

CC: Abortion is a wildly complex issue…and we somehow try to pretend that there are only “two sides” to it? Give me a break: there are more than “two sides” to the question of the moral status of the fetus alone! To say nothing of questions about whether it is morally legitimate to kill (or refuse to aid with one’s body) a prenatal child in various circumstances: early vs. later term pregnancy, cases of sexual violence, (mental) health exceptions, and many, many more. And then there is the question of what the law should be a plural culture with multiple understandings of the good. There are dozens of positions one could have on abortion…not two. Our life/choice labels are hopelessly imprecise.

Furthermore, Americans as a whole do not fit into either category. Our culture is deeply uncomfortable with abortion, but we don’t want to see it completely banned. 61% of us want abortion legal in the first trimester, but only 27% want it legal in the second trimester. Americans are energetically critical of abortion simply to cover up a mistake, but very sympathetic when it comes to the exceptional cases where a mother’s life is threatened or the pregnancy is the result of sexual violence. Though the extremists dominate the conversation (they get the most blog hits and retweets, after all), Americans generally have a nuanced view which reflects the complexity of the issue. That nuance and complexity goes well beyond our lazy life/choice binary.

CC:  I think most significant change I propose is a shift in our public policy which protects both prenatal children and their mothers. Significantly lowering the gestational limit at which a legal abortion can take place while at the same time significantly increasingly federal legal protections and supports for women and mothers. Interestingly, this mirrors the public policy of most countries in Europe. The US struggles to pass even a modest 20-week limit, but most of our European friends have limits of 12-13 weeks…while giving lots more social support to women and mothers. Americans want something like this too, but our binary and polarized liberal/conservative politics doesn’t allow us to achieve it. We are too busy fighting the abortion wars.

KSP: Technology today makes abortion less of an isolated issue given how it touches upon so many other choices related to reproductive technology. Ethical questions around such technologies as in vitro fertilization, surrogacy, prenatal testing, and pre-embryonic genetic screening often leave Christians confused, particularly when they try to apply their views on abortion directly to these questions. Because such technologies are employed to alleviate suffering (due to infertility or a family history of genetic disease, for example), Christians can feel torn between their respect for prenatal life and their compassion for those who suffer. Often, we respond to our confusion by failing to engage productively with such questions at all. How might a fresh perspective on the abortion debate also help reframe the conversation around reproductive technology, and inspire more helpful responses that address concerns with prenatal life while also addressing the great pain that such technologies aim to alleviate?

Furthermore, in part because many folks make such strong connections between these two sets of issues, some go further and attempt to draw direct logical lines from what someone thinks about, say, the legality of a surgical abortion a 17 weeks…to using IVF. The issues in play, while related, are so distinct that nothing very strong or interesting follows directly from one’s conclusion about one issue to one’s conclusion about the other. We need distinct arguments.

I do think we can say some very general things about how those arguments might go, however. First, we should have special concern for all vulnerable populations involved: the prenatal child, the infertile parent(s), the surrogate mother, gamete donors, etc. Second, “ending suffering,” while obviously a good thing, is not the trump card value. We should never, for instance, override the fundamental claims of justice for one vulnerable population in order to address of the suffering of another vulnerable population. Third, as a Christian I believe we should cooperate in the process of procreation and welcome children as gifts from God. When we start thinking of the process instead as re-production within a market system it risks losing that status as a gift which we welcome unconditionally. Once consumerist logic takes hold, it is very difficult to put the genie back in the bottle.

But, as I said, we have a big enough job trying to figure out a coherent way to speak about surgical abortion. The issues surrounding procreation and reproduction are related, but also quite distinct. We would do well to consider each set of issues in their own unique and complex circumstances.

March 13, 2015
Rethinking Margaret Sanger, Contraception, & How We are All a Moral "Mixed Bag"
Next Post