Please Don’t Post a Photo of Your Kid’s Broken Arm, For Her Sake (& Mine)

Please Don’t Post a Photo of Your Kid’s Broken Arm, For Her Sake (& Mine) February 29, 2016 Ellen Painter Dollar

A couple times a year it happens: I’m scrolling through my Facebook news feed and come upon a photo of a child, often a child who has OI—osteogenesis imperfecta, the genetic bone disorder I have—that is unsettling and difficult to see. Sometimes it’s a photo or X-ray of a child with a broken arm or leg that has not yet been treated. Sometimes it’s a photo of a child who has just come out of orthopedic surgery, perhaps lying pale and asleep surrounded by IVs and machines, perhaps glaring at the camera in annoyance, or even crying with pain and fatigue.

Photos like these leave me disturbed and sickened, because of how they remind me in the most visceral way of my own fractures and surgeries, and because I wonder how these kids might feel down the road about having their most distressing, vulnerable moments shared on social media. 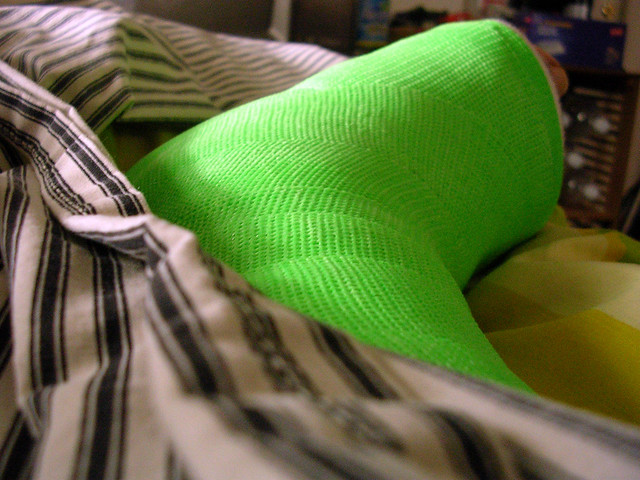 Families living with OI, of course, aren’t the only ones who post graphic injury photos on social media. The “look where we are” photo of a child in the emergency room, ankle or wrist freshly casted in his or her color of choice, is pretty standard Facebook fare. Photos of broken bones that haven’t yet been treated, bloodied faces, strange rashes, or dislocated joints are less common but more disturbing. I informally asked several friends what they think about such posts, and the most common reaction was, “Yuck!”

Those who post graphic photos of an injury say they do it for several reasons: They need advice about how to handle a medical situation, they need support from their social media community in a difficult time, or they want to efficiently share information about their or their child’s situation with many people at once.

However, it’s possible to inform people of an injury and ask for support without posting a photo of an arm that is clearly broken or a face that had an up-close-and-personal encounter with the sidewalk. When advice is truly needed (e.g., “Does anyone know what this rash might be?”), there are ways of soliciting feedback without subjecting everyone on your friend list to the heebie-jeebies, such as sharing a photo privately with a few veteran parent friends, including the photo in a comment rather than your main status so that people need to click on it to get a good look, or posting a photo on a service such as Dropbox and providing a link for anyone willing to take a look. Wanting empathy in the aftermath of a serious injury is human nature, but it’s possible to reach out without grossing out. For me, that photo of your kid’s not-yet-treated broken wrist or your bruised and dislocated finger isn’t just gross—it’s a shocking and sickening reminder of my own trauma.

Within the OI community, adults with OI have pointed out:

…that if parents are looking for support for themselves, perhaps a more appropriate photo would be of their own tear-streaked faces.

…that no one objects to parents posting photos of their kids doing regular kid stuff when they happen to have a cast or splint on; casts, splints, braces, wheelchairs, etc. are part of our lives with OI so of course those things will show up in our family photos.

…that no one objects to parents posting photos of a casted or splinted limb for the purpose of getting advice, for example, “This is our first attempt at a homemade splint. How’d we do? Anyone have advice or suggestions for us?”

…that no one objects to parents posting a photo of their child in the hospital, if the child is able and willing to smile or pose and thus imply consent.

…that what some of us find hard to understand and condone is the practice of posting a photo of a child in a moment of great pain, distress and vulnerability—when they have just woken from surgery or broken a bone—for the purpose of getting support and/or letting people know what’s happening, when it’s possible to do those things with words only.

…that kids with OI will some day be adults with OI who may feel just as we do.

Whether or not to post photos of our children in any context, and related questions around privacy and consent, are perennial in the social media age. Many of us raising kids with disabilities choose to share our children’s photos because we believe that doing so sends a powerful message about life with disabilities. A dominant cultural narrative says that disability equals a life of pain and suffering, and that children with disabilities are burdensome to families, communities, and society.  When we post images of our kids—kids with casts, braces, or wheelchairs; with amputations or prostheses; with bodily or facial injuries or deformities—doing regular stuff like celebrating holidays, going on vacation, having fun with friends, playing or performing, we let others know that life with a disability isn’t one long exercise in pain, but is a lot like life without a disability.

My friend Amy Julia Becker, whose daughter Penny has Down syndrome, has written about why she posts family photos online. She recognizes the risks involved, including that others could use her daughter’s image to ridicule or dehumanize people with Down syndrome. Something like this happened recently to Alice Ann Meyer and her son Jameson, who has a craniofacial condition, when they discovered an Internet meme featuring Jameson’s photo that compared him with a pug. Meyer has worked tirelessly to get these images removed from social media sites, and used the incident to educate people about her son’s condition. Meyer has decided, as many other parents of kids with disabilities do, that the benefits of posting her child’s photo outweigh the risks.

Becker has reflected on the power of photos in her own family’s story:

Part of what scared me as a new mother of a baby with Down syndrome nearly a decade ago was the lack of images and stories I could call upon when thinking about our family in the future. I could no longer construct an imagined narrative of our life as a family because I was unable to picture that life, and even more, I was unable to picture it in positive terms.

Recalling a book she received shortly after Penny’s birth with photos that showed her that “people with Down syndrome can be beautiful,” Becker shares photos of Penny regularly on social media and to accompany her extensive writing about their family and Down syndrome. “Seeing our family operating as a family,” Becker writes, “whether it’s Penny with a puzzled look on her face as her little brother wails, or an expression of wonder gazing at lights on a Christmas tree, or just a posed family photo with forced smiles—offers an invitation to imagine a bright future, not only for Penny but also for any child with Down syndrome.”

I write about my kids, particularly but not exclusively my daughter who also has OI, and share photos of them on social media. I ask their permission before writing about experiences, thoughts, or feelings that are particularly revealing or vulnerable. I rarely post photos of them when they are sick, upset or injured, and if I do, I get their permission and never post anything graphic. For example, when the whole family was hit with the flu a few years ago, I posted a photo of the three kids lying together on the couch. I’m even one of those sticks-in-the-mud who doesn’t find those “reasons my kid is crying” blogs very funny. As Aubry Hirsch wrote about this phenomenon for Brain, Child:

We need to remember that these children, even though they feel like “ours,” do not belong to us. They are people…Our kids are too young to meaningfully consent to having their photos shared. That doesn’t mean we shouldn’t ever do it, but it does mean that we have to take some extra responsibility to keep their interests in mind when we do. If someone took a picture of you at your worst, your most frustrated, your most vulnerable and exposed, how would you feel seeing it trend on a viral listicle? Part of the beauty of the parent-child relationship is that our kids feel secure when they’re alone with us, in their home, their space. They don’t need to hide their feelings or be on their best behavior…When your child looks at you for help, or comfort, they think they’re just looking at you. They don’t know that the phone you’re holding in front of them is a window, and that you’re inviting thousands of people into their private experience of pain. They think they’re safe.

It has become conventional wisdom that Facebook and the like allow people to showcase their best moments while obscuring the worst, so we get a skewed and false vision of what other people’s lives are like. But sometimes we overcorrect, engaging instead in a warped competition around who is the most real, the most honest about foibles and faults, the most screwed up, the most damaged. Beautifully coiffed, stylishly dressed women refer to themselves as a “hot mess.” Confessional blog posts are a perennial sure thing for page views. We push back against the pressure to be a perfect parent by proudly declaring ourselves a bad one.

I’m all for honesty, particularly when it comes to both parenting and life with a disability. But trumpeting our blunders and burdens can so easily become just another way to compare ourselves with other people and gather “likes” (or now, “loves,” “sads” or “angries”).

We can be honest without being exploitative or competitive. We can express our need for support and empathy without compromising other people’s need for privacy and safety. We can help people understand what it means to live with a disability without shining too bright a beam on someone else’s life story—particularly when that someone is a child either incapable of giving consent or of understanding the long-term implications of having his or her worst, most painful, and most vulnerable moments preserved forever online.

A night with Lot in Sodom,...
slacktivist
Related posts from Ellen Painter Dollar