Get updates from Emansplaining delivered straight to your inbox

My Secret Revealed and Updated

I didn’t want this to be my first post, but these days I have no control over much of anything, and I’m just going with the flow. On May 23rd, I did the thing that I never ever thought I would do, and reported my abuse to the police. My abuser was a relative, and as a 39 year old, I am outside of the statute of limitations, but I went anyway. The police told me, that they may not even present the evidence to the state’s attorney. Even if they did, they may not touch it, because the day I turned 38, the sands in the hour glass of justice dropped the last grain of sand. Last week, while I was in New York City, the police called me and said they were very sorry, but they were not going to be able to investigate my case. I expected it, but I did not expect the way I was going to respond to the news. I was devastated. The blowback from the bad news starts an arc of behavior that can be helpful or harmful, it just depends on the news and the severity of it. The harm is real.

Going to the police has been harmful to me in a lot of ways, and I knew it would be, but I went anyway.  I have to brace for bad news. I’m getting better at bracing for bad news and the blowback is getting much better. It’s whittled down to just sobbing in a bathtub, or crying myself to sleep. Anyone who knows me, knows how unlike me this is, because I never cry, at least I never used to. Now if I don’t get a good cry in everyday, I end up a sobbing mess a few days later. I’m getting better at catching and releasing bad news, hamdulillah. I think it’ll always be a work in progress. I will always be a work in progress.

I respond to bad news with a numb indifference, and I say reassuring things to the people around me. I then retreat to my private space, where I can fall apart alone. It’s in these times I try to turn to God, and try to find solace in prayer. It’s hard work and like I said it’s (and I am) a work in progress.

In seeking advice from mentors and teachers, I was told to make sure that I don’t make it about me. I have to make sure that the paths I create can be forged by others, even if my path leads to nowhere. I wish my path would lead to nowhere, but it’s lead to more heartache and pain, and I’m stronger for it, and it’ll be okay.

Anyone that has been around me, knows that I wear my heart on my sleeve. Sometimes I overshare. And that’s going to be my challenge. There’s a balance that must be struck between my public narrative and my private grief. I want to be the voice for victims of gender-based violence, but I cannot destroy myself in the process.

I wrote this piece in 2013 anonymously, and on June 5th, I identified myself as the writer.

I’ve been stuck in a dark closet for many years, and I have always wanted to get out. I couldn’t though because there was a lock on it. Sadly, lots of people had a key to the lock and they could have opened the closet. I banged and screamed and yelled, but no one could hear me because I did not have a voice.

The last few years of my life have been really difficult, and as a result of a lot of hard work I have found my voice. It’s a voice I’ve always had, but something pushed the mute button. That something was the abuse.

Have you ever had the TV so loud, muted it, unmuted it, forgot how loud it was and was startled by how loud the tv because you forgot that you set the sound. That’s me with emotional pain. I was numb for so long, and somehow the pain was unmuted, and it knocked me off my feet. I’ve been in the process of getting on my feet again. Lots of stumbling along the way.

I have trouble reading that piece even today, but I wanted to correct a few things that was in the piece. Lists get me through my day, and allow me not to write on forever and ever.

I think what people have trouble understanding is how sexual abuse affects a person’s life. Even though I’m an advocate for survivors of gender-based violence, I’ve counseled them, cried with them, and fought on their behalf, I still did not realize how much it affected my life until I did.

There’s more to write, I was supposed to write a part two for AltMuslimah, but writing part one was such a horrible experience, that I need to wait until now to write part two. And part two will be several pieces, because I didn’t realize how difficult it is to heal from that kind of abuse. Because I waited so long to start to recover, a lot more abuse was perpetrated against me. I was harmed by others, but mostly I harmed myself, and I’ve been picking up the pieces ever since.

I sincerely ask you to pray for me and for my family. I am always praying for others because the angels say amen for us when we pray for others. My prayer is to eliminate the need to pray for survivors, because one day I pray there will be no trauma to survive, and we’ll just thrive. 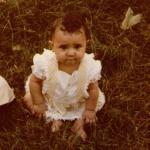