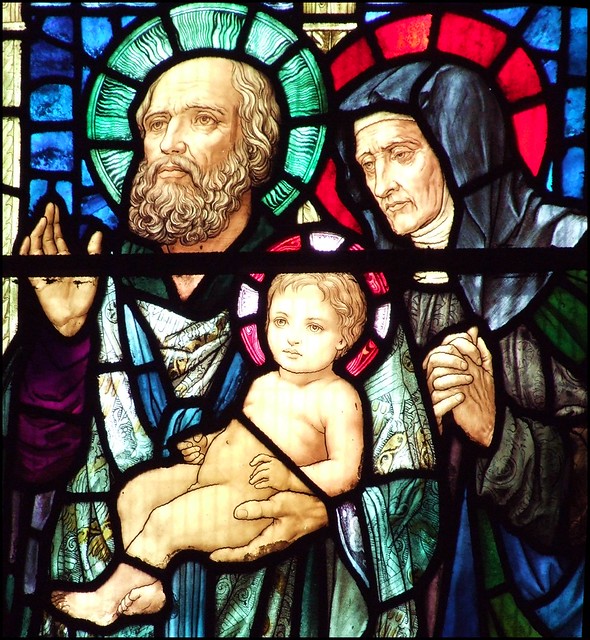 One of my favorite pairings of stories in the Bible is the two characters who emerge to interact with baby Jesus and his parents in the temple 8 days after Jesus was born.  After his parents offer the sacrifice and do what was required by the law, the text reads:

Now there was a man in Jerusalem called Simeon, who was righteous and devout. He was waiting for the consolation of Israel, and the Holy Spirit was upon him. It had been revealed to him by the Holy Spirit that he would not die before he had seen the Lord’s Christ. Moved by the Spirit, he went into the temple courts. When the parents brought in the child Jesus to do for him what the custom of the Law required, Simeon took him in his arms and praised God, saying: “Sovereign Lord, as you have promised, you now dismiss your servant in peace.  For my eyes have seen your salvation, which you have prepared in the sight of all people, a light for revelation to the Gentiles and for glory to your people Israel.” Luke 2:25-32

Imagine what it must have been like to know Simeon.  He’s the weird old man who will not shut up about God making him a promise that he would see the Lord’s Christ, the Messiah.  Everyone in your village has written him off as a cook.  You talk about him behind his back and children giggle when he comes near.

He got to hold baby Jesus in his arms, look him in the face, and be the first to prophecy over him at the temple.

There was also a prophetess, Anna, the daughter of Phanuel, of the tribe of Asher. She was very old; she had lived with her husband seven years after her marriage, and then was a widow until she was eighty-four. She never left the temple but worshiped night and day, fasting and praying. Coming up to them at that very moment, she gave thanks to God and spoke about the child to all who were looking forward to the redemption of Jerusalem.  Luke 2:36-38

Once again, what an interesting person Anna was.  Perhaps she was the female counterpart to Simeon’s weirdness; the weird old religious widow.

But here is the point: both of these people play important roles in Luke theme of the “new exodus”.  They are both connected with the “redemption of Jerusalem” or the “consolation of Israel.”  There was a tangible expectancy in the first century of the coming Messiah.  People were desperate for a deliverer.  They needed God to intervene.

I feel like that is something we miss at Christmas.  We forget the desperation that we see in our gospels.  In my experience, we focused on the early part of Luke chapter 2 but not on these later portions about Simeon and Anna.  As Christmas is now behind us, may we not forget that the first century Jewish world was pregnant with expectation for a Messiah, a deliverer.

May we continue share in that sentiment as we move toward the New Year.

December 27, 2011 Mary, Joseph, and Mysticism
Recent Comments
2 Comments | Leave a Comment
"When people who are not physically handicapped use the handicap stall, I just say to ..."
Aelxa Hill When the Golden Rule Fails
"I’m glad there is a end if we are suffering for a uncure thing I’m ..."
disqus_fyy1HxoUzu Thank God for DEATH: Could Anything ..."
"Church is boring. It should lose its tax breaks."
Ivan T. Errible The Embodiment of God (Fast of ..."
"This was an awesome post! It really gave me a new perspective on relationships and ..."
Bianca Williams Loss and Redemption in Relationships
Browse Our Archives
Related posts from Emergent Village