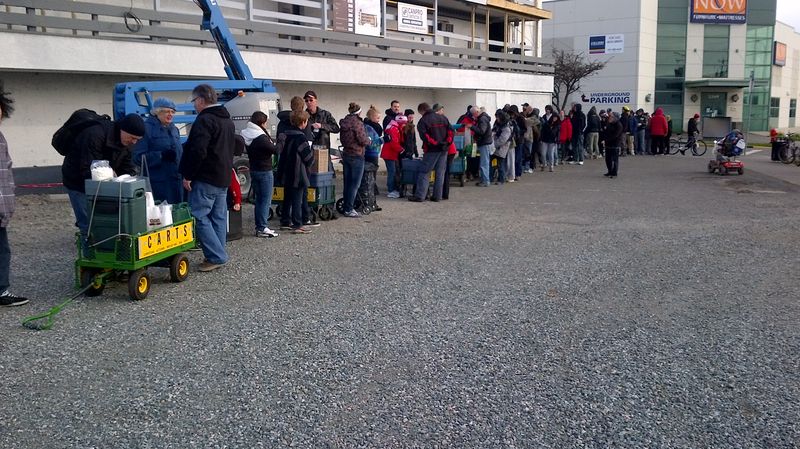 Faith should be filled with the redemptive imagination we need to envision  the reality of the resurrection ” now “, for out the the resurrection comes the inauguration, the revelation and the building of the Kingdom Jesus imagined, and lived in.

There was nothing special about the parking lot behind the Capitol Six Theater, and the transition to the Traveller’s Inn. What was special was that a few people took likely what they thought was a mustard seed of faith and planted it. They nurtured it, cultivated, prayed and loved and it grew. There was a vow of commitment, of faithfulness, that despite cold, rain, wind they would be there. The same time, same day, week after week, year after year.

There was a profound evolution of borders and boundaries being erased. What was once “us ” and ” them ” became a community of friends. It became an anticipation and expectation of watching, and looking for the arrival of friends. It was hugs, it was conversations and prayer. It was the worry of wondering about someone if they failed to show up on Friday…to now Sunday.

It was a circle of friends, holding hands, it was faces, it was eyes and smiles. It was improvisation of a God talk, a few minute sermon that sparked imagination. It was communion with the street community distributing the sacraments. It was the parable of the feast, the servant with invitations in hand going to the back allies, the gutters, skid row hotels, anywhere and everywhere so his Fathers table would be full.

It was hot chocolate, peanut butter and jam sandwiches, baked goods, cookies, fruit, socks, mitts, toques, blankets, sleeping bags, shoes, under-ware, clothing. It was, I was naked and you clothed me, I was hungry and you fed me. It was whatever you do for the least of these you do for me.

” What is this “, the young man kept saying to me.” I’ve never seen anything like this.” I really believe it was the reality of the resurrection, the ” now ” presence of Jesus risen in the midst of a community living out radical scandalous faith. He caught a glimpse of the Kingdom now. He saw people acting as co-creators in the revelation and building of Jesus’ Kingdom. He saw a place with out borders, boundaries…a place where people aren’t reduced to labels and stereotypes. He saw radical hospitality, grace, and mercy. In his ” lost-ness ” he felt the loneliness and separation of the prodigal son. But, more, he saw God in that parking lot with open arms welcoming him home. My son which was once lost, is now found.

For me CARTS has become a wild and crazy church. We long to feel the resurrection in our bones.We long for the Kingdom. We long, and welcome its thunder and quakes, and to echo its great gifts. The Kingdom coming into being can seem messy and chaotic. But as someone once said, at the Rainbow Kitchen…even in chaos there is beauty yet to be recognized, if we have the eyes to see and the ears to hear.

Practice resurrection in your daily life…simply let your life be your religion.

September 5, 2012
Prayer, is it just wishful thinking?
Next Post

Ira Einhorn and the politics of...
slacktivist
Related posts from Emergent Village

Literalists aren't Literally Literalists
There are things I've said in the past about this topic that...
view all Progressive Christian blogs
What Are Your Thoughts?leave a comment
Copyright 2008-2020, Patheos. All rights reserved.