It seems that cracks are opening in the religious veneer of the US – demographic data are showing that people are increasingly likely to tell pollsters that they are atheists or agnostics (see previous two posts). This much seems clear. The question then is: why?

The shift really seems to have happened in the current decade, and it’s a decade that’s seen some pretty seismic political events. There was 9/11 and subsequent media frenzy about religious violence. Then there was the plummeting popularity of Bush, whose administration was closely aligned to the religious evangelicals.

And then there’s the Dawkins phenomenon.

Has the enormous popularity of Richard Dawkins’ book, The God Delusion, contributed to the shifting beliefs of the American people? That’s certainly what Dawkins hoped for:

If this book works as I intend, religious readers who open it will be atheists when they put it down. (The God Delusion)

On the other hand, critics of Dawkins have argued that his strident, take-no-prisoners style has done more harm than good. Madeleine Bunting, writing in the Guardian, goes so far as to demand proof that anyone at all has been converted.

Well, proof is hard to come by but there is good evidence that Dawkins’ prose really can change beliefs, at least in the short term. This evidence comes from a study published last year by psychologist Azim Shariff and colleagues at the University of British Columbia (Shariff is the guy who co-wrote the review last year on the pro-social effects of religion).

What they did was give some students a couple of paragraphs from an essay that Dawkins wrote way back in 1994 that succinctly made his case. They don’t quote the passage directly, but I’ve tracked it down and this is it (it was published in the electronic newsletter Nullifidian):

The great beauty of Darwin’s theory of evolution is that it explains how complex, difficult to understand things could have arisen step by plausible step, from simple, easy to understand beginnings. We start our explanation from almost infinitely simple beginnings: pure hydrogen and a huge amount of energy. Our scientific, Darwinian explanations carry us through a series of well-understood gradual steps to all the spectacular beauty and complexity of life.

The alternative hypothesis, that it was all started by a supernatural creator, is not only superfluous, it is also highly improbable. It falls foul of the very argument that was originally put forward in its favour. This is because any God worthy of the name must have been a being of colossal intelligence, a supermind, an entity of extremely low probability – a very improbable being indeed.

Afterwards they were asked to summarize their feelings about Dawkins’ argument. A control group was asked to write about their favourite food.

Then they did a distraction task, and then filled in a number of questionnaires, including one about their religiosity. According to this survey, their religiosity dropped by a small, but significant amount. Score 1 point to Dawkins.

But hang on, there’s a number of reasons that people might change what they put in a questionnaire that have nothing to do with their actual opinions. It might simply be that they were inhibited from answering truthfully before. Or it might be that they are now inhibited. In other words, people are affected by what they judge to be the questioners’ expectations.

So an objective test is needed. What Shariff & co used was a version of the Implicit Association Test. The gist of this is that images (or, in this case, words) are flashed up on the screen, and you have to sort them according to whether they are true or false. The cunning bit is that you are told whether to answer true or false. The test comes not in which ones you get right, but in how fast you react.

The theory is that if the instructions on how to sort into ‘true’ or ‘false’ go against your implicit beliefs, then you’ll need more time to sort them. If they fit with your prejudice, you’ll fly through. It’s an objective measure of your real ‘gut feelings’. 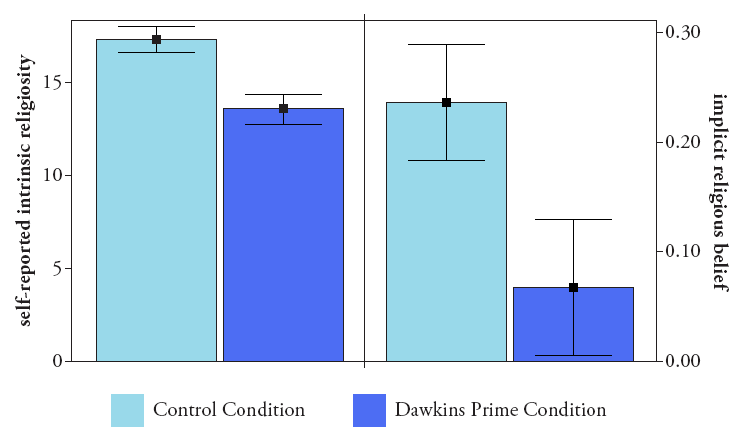 Both show a decrease in religiosity in those who read the piece by Dawkins, but the implicit test shows a rather striking drop. It seems that Dawkins really can change deeply held beliefs.

OK so this was only a short term study. Once these people got back out into the real world, with the constant barrage of pro-religious sentiments, they no doubt rapidly lapsed. But what happens if the Dawkins message is louder and more regular? Could that really change attitudes in the long-term?