Can you use religion to change attitudes towards immigrants?

Migration is a hot topic at the moment. While Americans debate the infamous ‘wall’ proposed between Mexico and the USA, in Europe the language around the waves of migrants from the Middle East and North Africa is becoming increasingly inflamed.

Does religion play a role in attitudes to migrants? It’s difficult to unravel because migrants often differ in both religion and ethnicity from the host countries. Does the fact that many migrants to Europe are Muslims contribute to the hostility, or is it more to do with other cultural attributes and customs?

Complicating matters is the fact that research has linked religion to two directly opposite effects on attitudes to migrants. Religious affiliation has been linked towards hostility to people of different religions, while pro-social religious beliefs can encourage acceptance of strangers.

It’s been shown, for example, that hostility to migrants in Europe is strongest among the ‘culturally Christian’ — those who are claim a Christian affiliation but rarely practice the religion.

But maybe people just choose to identify with religion in a particular way because they’re the kind of person who’s hostile to immigrants. Can you actually manipulate attitudes towards migrants by playing upon these different aspects of religion?

Two recent studies have investigated this using a technique called priming. Concepts and ideas are subliminally implanted in the mind of the research subject to see if it changes attitudes or behaviour.

An international trio of researchers (Pazit Ben0Nun Bloom at Hebrew University in Jerusalem, Gizem Arikan at Yasar University in Turkey, and Marie Courtmanche  at Thiel College in the USA) ran a survey of over 450 religious people in Israel, Turkey, and the USA.

The survey was about attitudes to immigrants. But before asking about attitudes, they asked their subjects to unscramble some religion-related sentences. Some subjects got sentences about compassionate aspects of belief, some about the social identity dimension of religion (belonging to a religion) and some (the controls) just had neutral sentences. The idea was to mentally prime their subjects with these different thoughts before asking them about immigrants.

What they found was that priming ideas about belonging had a small but significant effect, encouraging their religious subjects to be more hostile towards immigrants (unless they were of the same religion and ethnicity as the subject).

Priming thoughts of compassion had, to their surprise, no effect (although it did in another study they ran just looking at students). What they then found was that compassion had a strong interaction with political persuasion. 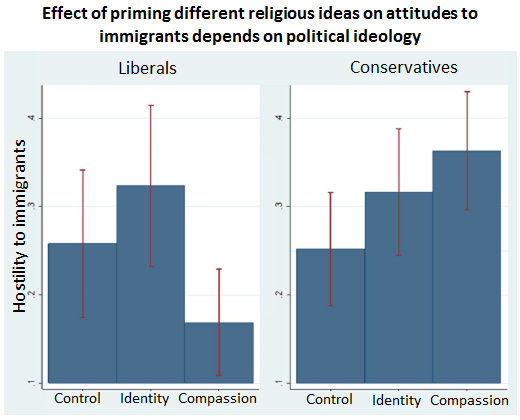 They suggest that for conservatives, even the religious compassion prime may activate a heightened sense of group boundaries, leading to intolerance of anyone outside their immediate moral circle.

They also found that, in their sample, religion was much more important then ethnicity in driving attitudes to immigrants. This is evidence that religion can break down some barriers while at the same time building others.

In a related study, Jonathon Ramsay (SIM University, Singapore) and colleagues tested 119 undergraduate students from Nanyang Technological University in Singapore. Each of them was asked to evaluate “Adrian Garcia” – a  fictional foreign student, based on a short vignette they were given to read (women received the same material but the name was changed to Adriana, to avoid gender bias).

Before they did this, however, they were asked to do a ‘spot the difference’ task. They were shown two pictures of a desktop, and asked to point out what had been changed. Prominent in the images was a folder with either the word Religion, God, or Neutral. This was the subliminal prime, intended to implant thoughts either of religious affiliation, religious beliefs, or neither.

Ramsay and colleagues found no effect at all of any of the primes.

That’s something of a surprise given that a previous study with roughly similar design did find that such primes affected attitudes toward so-called “out-group” members. However, numerous small differences in the design of the experiments could explain the different findings, overall it underlines just how sensitive the effects of religious primes are be to cultural and social contexts.

Nevertheless, it seems clear that in certain social contexts, priming thoughts of religion can indeed change attitudes to immigrants — in particular towards migrants of differing or similar religion, but the effects are by not means straightforward or consistent from person to person.

March 23, 2016 What kind of woman would pray for health or use spiritual healing?
Recent Comments
0 | Leave a Comment
Browse Our Archives
Related posts from Epiphenom

Nonreligious
How religious schools led to the decline of...
Epiphenom