How religious schools led to the decline of Arabic science

How religious schools led to the decline of Arabic science January 14, 2016 Epiphenom

The world’s first scientific renaissance took place not in Italy, but in the Arab world.

The period between the 9th and 11th centuries AD, when Islam took hold of a band of territory strategy from Spain in the West through to what is now Pakistan, saw an extraordinary intellectual flowering. Scientists in the Arab world during this period made important advances in fields as varied as astronomy, mathematics, medicine and optics – advances that fed into and stimulated the later European Renaissance.

Which makes it all the stranger that modern Islamic nations have such a lamentable record in science. Where did it all go wrong?

There are several competing theories about what happened, and Eric Chaney, an Economist at Harvard University, turned to an unusual source to try to find out which is correct (you can read his paper on the topic here).

Two hundred years later just 7% of books were scientific in nature, and that drops to 2% by 1700 (shown in the graphic below). Meanwhile, there was an upsurge in religious books. 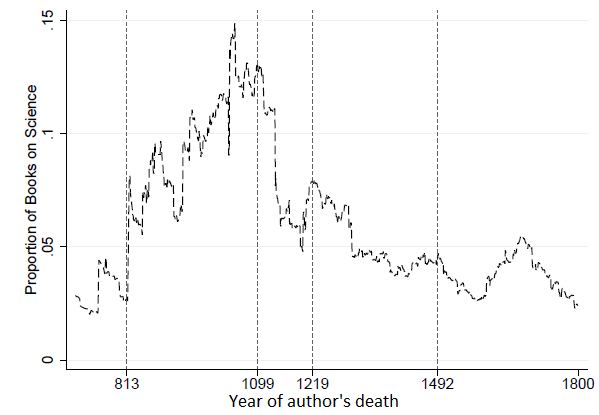 One traditional explanation for this decline has been that outside aggressors – the Crusaders, or the Mongols – destroyed the centres of learning. But Chaney found that both the timing and the geographical distribution of the decline makes this explanation unlikely.

However, the decline in scientific output did correlate strongly with a dramatic rise in output from Islamic religious schools, or Madrasas.

Chaney believes that the decline in Arabic science a direct result of the ‘Sunni Revival’ – a kind of upsurge in religious sentiment and authority.

In the early years of Islam, during the Abbasid Caliphate there was a kind of inquisition. But this inquisition required all religious leaders to adopt rationalist approaches and reject traditionalist doctrines.

The Sunni revival was a traditionalist backlash.

Why did the traditionalist movement gain power? Chaney provides evidence that it was due to the increasing conversions to Islam.

In the early days of Islam, although  the ruling classes were Muslim large numbers of the populace were not. The rulers insisted on rationalist version of Islam to appeal to their subjects and also to gain converts. Chaney shows that the Sunni revival occurred at different times in different regions, and coincided with the point at which Muslims became the majority.

The decline in Arab science was, according to this view, caused by the political empowerment of Muslim religious leaders. As a result, education and learning was focussed on the Madrasas and not in independent Universities as in the West – a key factor in the upsurge of learning in the West).

And once religious traditionalists took control of the education system, they shut down most lines of scientific inquiry. Not only were there fewer scientific works after the Sunni Revival took hold, but those that were produced in the were cited less often – indicating that they had less impact on other scholars.

Chaney quotes al-Ghazali, who lived in the 11th century and is one of Islam’s most renowned religious scholars

…he who studies mathematics is amazed by its precision and proofs. He then takes a more positive view of philosophy and reckons that all of the rational sciences are as clear and trustworthy as mathematics […] and he says: if religion were true, then philosophers would have proved its veracity with their precise methods […] we have seen many deviate from [Islam] in this manner.

So this is a simple case of power and control. Once the Sunnis became dominant, they clamped down on any potential challenges to their authority. And that included rational inquiry – dealing a fatal blow to the region and causing lasting damage that persists to this day.

Chaney E. Religion and the Rise and Fall of Islamic Science. Working Paper.

January 7, 2016
A sense of mystery results from the brain failing to shut down flights of fancy
Next Post