Morality is a complex notion, and means different things to different people. Still, there remains a pervasive idea that religion is linked in some general way to moral behaviour. Trying to work out from the data what truth there is in that is tough, but at least we can say with some confidence what people’s attitudes to different moral questions are.

That’s due to projects such as the European Values Survey, a massive initiative that has been run at regular intervals across many different European countries for several decades. Among the many questions it asks are ones on attitudes to bribery, cheating, lying, abortion, homosexuality, prostitution, suicide (and many others besides.

Using statistical techniques, Ingrid Storm (a social scientist at the University of Manchester in the UK) was able to show that responses to these items cluster together. One group of moral attitudes roughly corresponds to individual freedom – people who who believe that abortion is morally wrong are also likely to believe that  homosexuality, prostitution, and suicide are wrong.

But attitudes to self-interest morals – things like using lies, bribery or cheating to gain personal advantage – cluster separately. This suggests that these are viewed as a different kind of morality to the ‘individual freedom’ kind of morality.

When she looked at data from individuals, she found that religious people did in fact disapprove more strongly of breaches of both kinds of morality than did the non-religious. But the difference was much smaller for issues of ‘self-interest’ morality. You can see for yourself in the graph below. 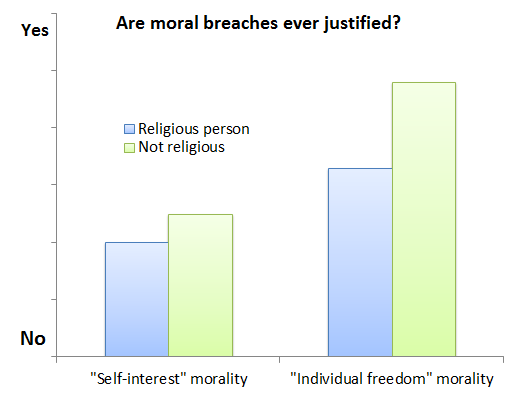 This relationship between religion and morality was stronger in countries where there are more religious people. And this in turn suggests a kind of networking effect, in which a strong religious social context provides a kind of validation for the association of religion with moral values.

Religion also had a stronger influence on ‘self interest’ morality in countries where confidence in he government was low. This supports the idea that people turn to religion as a way to enforce moral behaviour when secular governance is weak.

All this suggest that the relationship between religion and morality is complex, and influenced by what’s going on in wider society. As personal freedoms have increased, so religion has become less important in people’s lives (alternatively, in those parts of Europe where religion remains important, individual freedom is still regarded as morally wrong).

But although religion is linked in a weak way with attitudes to ‘self-interest’ morality, the decline in religion has not lead to a loosening of attitudes to bribery, cheating, and lying.

That’s probably because the link between religion and morality, at least when it comes to bribery, cheating, and lying, gets weaker as religion becomes less dominant in society as a whole. 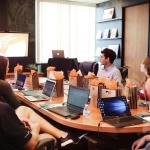