Compared with Whites, Black Americans have  high levels of an important stress hormone called cortisol circulating in their bloodstream.

No-one really knows why this is, but the differences remain even after you take into account social and psychological factors. It seems likely that simply being black exposes you to a cumulative effect of increased lifetime stress.

Blacks in the USA are also more likely to be religious than Whites. Shervin Assari, at the University of Michigan, and colleagues, wondered if this might affect their cortisol levels.

They examined 200 black participants in the Flint Adolescent study. This was a 18-year study following Black, White, or bi-racial youth who were at high risk for substance use and school dropout.

In 1994, when they were about 15 years old, they were asked about their religious activities (how often they went to Church, etc). Then, six years later, the amount of cortisol in their saliva was measured. 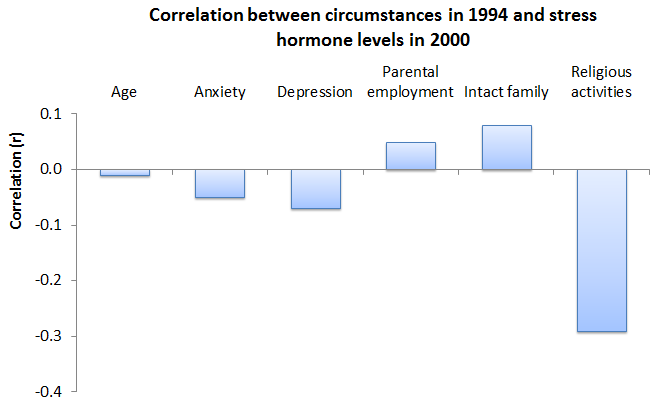 On average, being involved in religious activities when young was associated with a major reduction in stress levels in later life. Religion was far more important than the other factors they looked at, such parental employment and whether the parents were divorced.

In fact, religious activities was the only statistically significant factor, and remained so even in a multivariate model (one that takes all the different factors into account).

The association was stronger for boys than for girls, but the difference between the two was probably not significant.

Not only does this support the idea that one reason for the popularity of religion among blacks is that it helps to provide a psychological buffer against the stress of growing up in a racially discriminatory environment, but it might also help to explain the link that is sometimes found between religion and health.

Black Americans are much more likely to suffer of long-term cardiovascular disease, such as hypertension, heart disease, and strokes. Religious people in the USA are also less likely to suffer from these (after adjusting for factors such as wealth and age).

Cortisol levels are also linked with these same diseases. Perhaps here is the link that helps explain both the attraction of religion for blacks, as well as its apparent health benefits

January 14, 2016
How religious schools led to the decline of Arabic science
Next Post

February 4, 2016 The decline of religion in Europe did not lead to a decline in moral standards
Recent Comments
0 | Leave a Comment
Browse Our Archives
Related posts from Epiphenom