Do you wanna be in my clan? Moralising gods encourage long-distance sharing with co-religionists

Do you wanna be in my clan? Moralising gods encourage long-distance sharing with co-religionists February 11, 2016 Epiphenom

Most gods that have been invented don’t give a damn about what us mortals get up to. Researchers think that  belief in the few that do, the ones that can be thought of as moralising gods, might have a significant effect on behaviour.

For example, more complex societies are more likely to believe in moralising gods (When did Moralizing Gods Emerge?), and people living societies in which there is a level of belief in ‘world religions’ like Christianity and Buddhism are more willing to share money with strangers (Did World Religions Help Bring About Complex Societies?).

Now, a team of scientists that reads like a ‘Who’s Who’ of experts in the anthropology of belief in moralising gods has come together to perform a sophisticated international study in a wide variety of world cultures. You can see the locations of the cultures they studied on the map below.

These societies span the range from hunter-gatherers through herders, farmers, to wage-labour economies. What they all have in common is that they mix belief in a moralising religion (Christianity, Buddhism, Hinduism, and a couple of local gods) with a wide variety of non-moralising spirits, gods and ghosts.

In each of these societies, they asked the locals to play a game. One that tested their honesty in dealing with anonymous strangers.

Basically, they were given thirty coins and two cups. In one version of the game, they were told that they could keep whatever money went into the first cup, and that whatever went into the second cup went to a co-religionist living in a neighbouring community.

The second version of the game was just the same, except all the money in the first cup went to a co-religionist in their community.

Now, if you think about it, if all the participants were honest then the money should have been distributed equally between he two cups. After all, it’s just down to the roll of a die. But of course that’s not what happened.

In fact, they lied. They tended to put more money in the first  cup – the proceeds of which went to themselves or people from their own community.

However, those who believed in a punishing god were more likely to be honest. In fact, as you can see in the graph below, these people nearly reached magic number of 15 coins donated to distant co-religionists (which would’ve indicated full honesty). 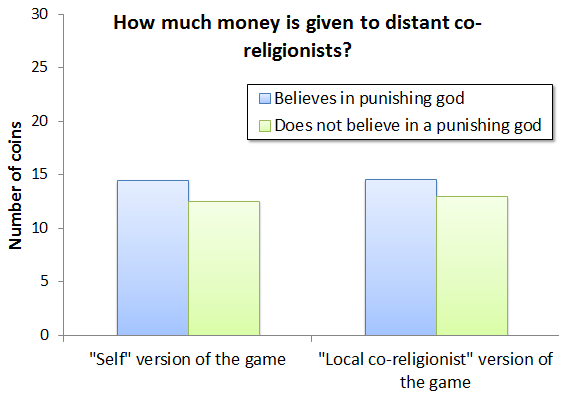 Now, the effect is not huge. But it is there, and it is statistically significant.

They ran their data through a model that controlled for a bunch of variables, like material insecurity, number of children and also beliefs about the local gods (whether they are all-knowing and/or punishing). But the findings were pretty robust.

What this suggests is that people are indeed more likely to give to co-religionists, even when they are geographically remote. That supports other research suggesting that religion encourages people to see their co-religionists as part of their own tribe (see: the hand grenade experiment, for example).

However, when they tried subliminally priming their subjects with ideas about moralising gods, it had no effect on their behaviour. So it’s not altogether clear whether their belief is a cause of their behaviour, or simply a product of it.

What’s more, other research that has been done into the timing of the emergence of moralising gods has tended to show that they come about after the emergence of complex societies (see: Wealth and Enlightenment in the Ancient World and Did Belief in Ghosts Help Kick-Start Civilisation?).

So does belief in moralising gods help to create and sustain complex societies? Well, it certainly seems that it can change behaviour towards co-religionists, making them feel like part of your tribe – even if that effect is small. But it’s also clear that the emergence of moralising gods is something that has played a kind of waltz with civilisations – being constantly adapted in response to changing social needs.

February 4, 2016
The decline of religion in Europe did not lead to a decline in moral standards
Next Post

Nonreligious
How religious schools led to the decline of...
Epiphenom