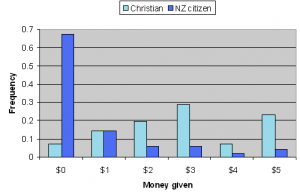 So, you’re in your bunker, and a hand grenade lands. Do you fall on it, smother the blast, and sacrifice yourself for the group? What if they were co-religionists? Wouldn’t you like to find out if that makes a difference?

Unfortunately, doing that actual study is considered unethical in today’s PC world. So here’s a study that uses the next best thing: financial, rather than bodily self-sacrifice.

What Joseph Bulbulia and Andrew Mahoney, of Wellington University in New Zealand, set out to discover was whether Christians reward other Christians who they observe making a sacrifice for ‘the team’. They did this by asking a group of local Christians to play a two-stage online game with a similar group of Christians located in Manitoba, Canada.

In the first part of the game, the New Zealand Christians offered a fixed $5 sum to the Canadians, who could accept all, none, or part of what was offered. Whatever was accepted was doubled and shared between the two. So if the Canadian accepted $3, then at the end of round 1 she would have $3 and the New Zealander would have $8.

The second ruse was simply that the Canadians didn’t actually exist. The New Zealanders weren’t told about that one.

Think about that. You are told that the Christian on the end of the line has turned down your offer – hurting both you and him – for no other reason than his (misinformed) belief that you are not a Christian! How do you react?

Well, before answering that you need to know that there was a control group. The control group was treated in exactly the same way, except they were just an ad hoc selection of New Zealander students. These subjects were told that the other player was a New Zealander located on the North Island, who rejected their offer on the grounds that player 1 (the human!) was a foreigner.

The comparison between the two groups is shown in the figure. Overwhelmingly, players in the control game – about nationalism, gave back nothing in round 2. They chose not to reward their partner, who had punished them for not being a New Zealander.

But look at the Christians. Most of them gave something, and 20% of them gave the most they could. It seems that they were rewarding their fellow chrisitians, who were prepared to make the not-quite-ultimate sacrifice for the good of the group.

I’m not entirely happy with that conclusion, though it’s the one drawn by Bulbulia and Mahoney. I wonder whether these Christians were actually demonstrating forgiveness and love, showing the other side the only way they could how a true Christian behaves. After all, the money was sent to the Canadian accompanied by the words “The New Zealand player really is a Christian and has decided to give $X.” I would think many of the players would regard it as unchristian to punish and not forgive.

This could’ve been tested with a third group – facing a Canadian player who was not a Christian. That setup would’ve sat uncomfortably with the deceptive nature of the study, however.

There are other caveats. New Zealander Christians are a minority group – New Zealand is one of the most secular countries in the world. That may generate especially strong feelings of group solidarity, especially in a setting where their religious identity was heavily primed (they knew, presumably, that they had been selected because they were Christians, and the Christian group identity was regularly reinforced during the experiment).

Notwithstanding all that, this study does clearly show that Christianity can trigger altruistic sacrifice, for whatever reason, for fellow Christians. On that basis alone, religion does seem to be a powerful tool for generating group cohesion.

In a world of competing groups, this might give the more religious ones a competitive edge.

May 22, 2009 A leaflet from my friendly neighbourhood fascists
Recent Comments
0 | Leave a Comment
Browse Our Archives
get the latest from
Nonreligious
Sign up for our newsletter
POPULAR AT PATHEOS Nonreligious
1