This is a long post, but hang on in there because it’s worth it. There’s a wonderful paper just out in Science that sheds new light on a mystery of human behaviour: why do people sometimes do good deeds even when they gain nothing from it.

Some forms of altruism can be easily explained by evolution, but evolution can’t explain why people are sometimes generous to completely anonymous strangers. This new study may have found a solution: it isn’t something inherent to our nature, but rather something that we learn to do.

You might have seen something of it already – it’s featured on several news wires. I’m not going to go into detail on the headline results, because you can find them elsewhere (Wired magazine has a nice write up, for example).

What interests me most about this study is the link they found to religion. But first, here’s a quick overview of what they did, and the major finding. The heart of the study was a standard battery of economic games designed to test their subject’s understanding of fairness:

Now, the logical thing to do in all these games is to hold on to all your money. You have nothing to gain by sharing (the games are anonymous), and all that happens is that you go home with less. However, what usually happens is that people do share some money (usually not 50%, however!). 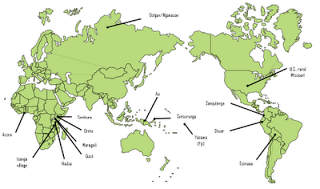 What makes this new study unique is that they’ve put together data from the world over, including the rather marvellous Hadza (you can see the locations on the map). Then they compared how much people contributed with what kind of society they lived in.

This potentially resolves the conundrum! What it suggests is that anonymous altruism is not part of our evolutionary make up, but instead is something that we learn from the society around us. The reason big, complex societies can exist is that we drum it into our kids that they must be fair and kind to strangers (against their natural instincts).

So what’s the connection with religion?

Well, they also showed that, in two out of the three games, the anonymous contributions were higher in those groups that had converted from tribal religions (in which gods do not enforce morality) to follow a ‘world religion’ (in practice, either Christianity or Islam).

On the face of it, this is supports the idea that ‘world religion’ is a cultural adaptation to allow the formation of complex societies. The invention of and all-seeing, morally concerned god increases the honesty in anonymous transactions, and thus allowing large, integrated communities to develop.

When you look at the history of religions, it’s clear that the development of religious ideas has progressed in tandem with the increasing complexity of society. Robert Wright has written a book on the topic, and in the supplementary material the study authors give a nice summary of these ideas.

It all sounds very plausible. However, it’s not quite that simple, for a whole host of reasons.

So you would expect a complex, diverse society to develop some kind of syncretic belief system – a ‘World Religion’. And that belief system would inevitably encapsulate the social norms of the complex society that created it. People create a god in their image.

Suppose, for example, that countries with more parasites end up with more fractured societies that are naturally less trusting of strangers. After all, strangers could bring with them disease. Surprisingly, studies have found that this is exactly the pattern you see – people living in high parasite regions are less open to strangers and have more fractured religions (Fincher & Thornhill, 2008). These societies, with their tribal rather than world religions, would naturally be less co-operative in anonymous games.

And the reality is that, in modern societies at least, non-belief is correlated with less corruption and more trust. Social norms, rather than god beliefs, seem to be of primary importance.

As support for the hypothesis that ‘world religions’ promote pro-social behaviour, they quote the work of Shariff & Norenzayan. That was a small study which found that, in a similar economic game, subliminal religious primes (i.e. a quick flash of a religious word) were marginally more effective in believers than non-believers.

However, they also showed that non-religious primes were equally effective, and also that without the priming both religious and non-religious were equally pro-social. What’s more, other studies (Randolph-Seng & Nielsen, 2007, Ahmed 2009) have shown that pro-social effects of religion are all about the situation, rather than the beliefs.

Put these findings together, and what you get is the strong suggestion that the way to encourage pro-social behaviour is to remind people about their cultural training (religious or otherwise). The more you reinforce a social norm of co-operation, the more people will co-operate.

Now, that doesn’t rule out a role of religion in stabilising societies. In fact, I’m inclined to that that there must be a link. But it is fearsomely difficult to prove, and it’s clear that whatever the link is, it’s much more complicated than it appears at first sight.

I’m going to leave you with one other niggling anomaly from the paper. Remember that ‘world religion’ was associated with more pro-social behaviour in only two out of the three games? Maybe you were wondering which was the one out?

Well, the game that was the ‘Third Party Punishment’ game. This is the game in which Player 1 should give more money if they fear that Player 3 might spend some cash to punish offers that were too low. It’s a particularly relevant test because third party intervention to enforce the rules is a crucial feature of complex society.

Unlike the other two games, being Christian or Muslim had no effect on Player 1’s offers. What makes this doubly fascinating is that this is the only game in which wealth and income affected Player 1’s decisions.

The authors suspect it might be that the introduction of a ‘judge’ reduces the intrinsic motivation. In other words, the offers players make depends on what they think the judge will approve of, rather than what they themselves think is fair.

However, I couldn’t help but be reminded of another study that looked at punishment behaviour in a similar game. They examined a cross-section of relatively high income countries, and found high levels of co-operative punishment, and low-levels of anti-social punishment, in the least religious societies (Copenhagen and Melbourne).

Conceivably, if you don’t believe that there is a god on hand to enforce the rules, you might just be motivated to do it yourself!

How (and Why) Evangelicals Blow Their...
Roll to Disbelieve
Related posts from Epiphenom