In modern, industrialised societies, we put an awful lot of trust in strangers. That’s good, because if we couldn’t trust strangers then most of our economic and social transactions would struggle. In fact, trust is a cornerstone of economic growth.

It’s hardly surprising, then, that nations with high levels of trust are also the wealthiest. They also often have a high number of atheists – Sweden is the classic example.

But does atheism add to that trust, or take away from it? After all, atheists are (famously) one of the least trusted minorities in the USA.

Two Swedish researchers (Niclas Berggren and Christian Bjørnskov of the Ratio Institute in Stockholm) have looked at what role religion has in explaining different levels of trust in countries around the world, and in different States of the USA (Working paper only, available here).

Well, that’s interesting in itself, but of course there could be any number of reasons for that correlation. For example, income inequality erodes trust, and it also increases religiosity. Berggren and Bjørnskov take care of most of them by adding them into their model. 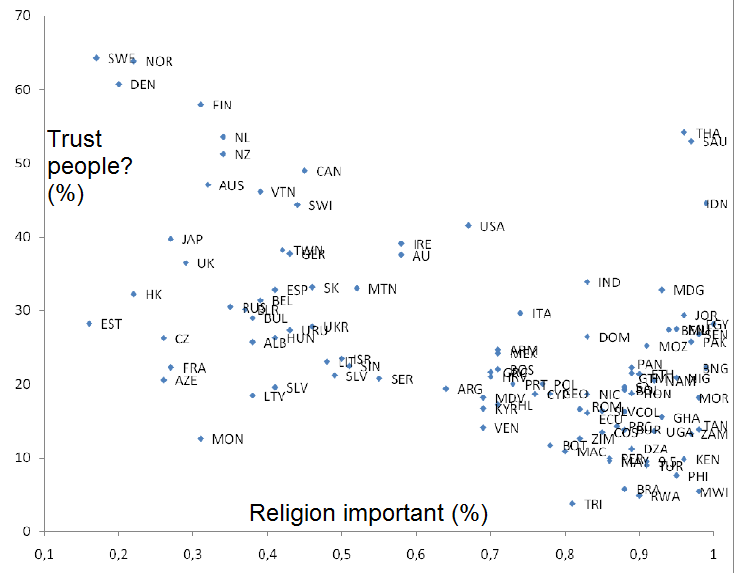 However, even after adjusting for income inequality, presence of a monarchy (increases trust, apparently), post-communism, and proportion of Muslims, Catholics or eastern religious people (none of the religions had any effect), the correlation remains pretty robust.

Just in case there’s something magic about Nordic countries, they even included them as an ‘explanatory factor’ (it turns out that there does indeed seem to be something special about them – it’s not just the atheism)

For the US states, they adjusted again for income inequality, blacks, and ages. They also took into account from which countries the local’s ancestors had emigrated. Again, the correlation stuck.

To give you a feel for how strong the effect is, if you go from the average nation religiosity (67% of people saying that religion is important in their lives) to Nordic levels (20%), the number of trusting people goes up by about 8-10 percentage points (and this is after adjusting for all the factors mentioned above).

Among US states, the effect is similar. If you move from the average (65%) to the least religious (Vermont, 42%), then trust increases by about 5-10 percentage points.

How did they demonstrate causality?

What they’ve shown is a correlation, of course. So how can they be confident that it’s atheism increasing trust, rather than trust increasing atheism? Well, they use a statistical trick (guess I have to be careful with that word, given the climate email controversy!) call ‘instrumented variables’. Basically, this means choosing another variable that correlates with religion but can’t directly be influenced by trust.

They chose GDP which might seems strange choice given that trust is an important cause of economic growth. However, they show that the other factors included in the model account for this relationship, and that GDP is independent of reverse causality.

It seems strange, given that religion is supposed to increase honest behaviour, that people in less religious countries have more trust in their neighbours. Berggren and Bjørnskov argue that this is probably because of the divisive effect that religion can have:

The main reason to expect a negative effect, of the kind we have identified, is that religions may cause division and rift, both in that religious people may distrust those who do not share their beliefs and who are not subject to the same enforcement mechanisms as they are, and in that nonreligious people may regard with suspicion those who take religiosity seriously.

In other words, one explanation for these results might that religion promotes distrust of people outside the group. It sounds intuitively plausible, and it’s an idea that’s supported by other the research into the causes of distrust.

While you might expect that people distrust anyone who’s different from them, it turns out that that is not the case. Diversity only increases distrust when the different groups are segregated from each other. This is from a talk by Eric Uslaner, at the University of Maryland:

… diversity can also drive people apart–when people feel threatened by minority groups. Most critically, diversity can drive down trust when there is little opportunity for contact between groups groups–as where the minority group is geographically segregated from the majority.

However, Uslaner also points out that religious diversity does not itself seem to greatly increase distrust. It’s the strength of religious feeling that’s critically important:

Religious fractionalization is only weakly related to ethnic and linguistic diversity. Religious fundamentalists are significantly less trusting than adherents of mainstream religions (Uslaner, 2002, ch. 4) and religious conflict is at the heart of many inter-state and intra-state wars. So we might expect that religious diversity would be more strongly (negatively) related to generalized trust–but again, we see only a weak relationship.

Well, so much for the philosophizing. What we need now is for someone to tease out these two factors to see which explains the link between atheism and trust.