Are religious people more co-operative? How to prove what you want by careful experimental design

Are religious people more co-operative? How to prove what you want by careful experimental design June 15, 2009 Epiphenom

Two new studies have looked into the question of whether religious people are more co-operative and come to opposite conclusions. Put together, they show very nicely just how complicated this seemingly simple question really is – and they also shine some light onto what effects religion really has on behaviour.

The best thing about them is that they were both done by the same guy, Ali Ahmed at Växjö University in Sweden.

Both studies used the same basic setup. He got people to play the ‘Public Goods’ game, which is a standard game used to test co-operativeness. The basic idea is that you get put in a group of three and everyone is given some money, which they can either stick in a common pot or keep to themselves. Everything that gets put in the pot gets increased by 50%, and then shared back equally.

The tricky bit is that this is all done in complete anonymity. Now, the rational thing to do in this game is to keep all your money for yourself. That’s the strategy that gives the best payout on average.

But in fact that’s not what people tend to do. They tend to put at least some money in. Quite why they do that no-one really knows. It might be simply that our minds aren’t geared up for this kind of artificial, one-shot, anonymous transaction. It’s the cognitive equivalent of a visual illusion.

If you’re religious, though, the calculation shifts. Nothing that a religious person does is truly anonymous. Since they often believe they’ll get a supernatural reward for good behaviour, it makes sense for them to contribute to the pot, even if they don’t get back as much as they put in.

Well, that’s the theory at least. Ahmed set out to test it. 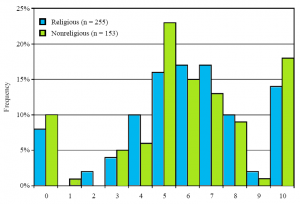 In the first study, he ran the experiment with groups of economics students in Mexico, Sweden and India – culturally Catholic, Protestant, and Hindu. A good cultural cross section.

In all three places, there was absolutely no difference between the religious and the non-religious students. You can see in the graph what happened (the numbers at the bottom refer to the numbers of tokens contributed – they got to convert them to money at the end of the experiment).

The second experiment was done in India only, but compared two different groups of students. The first group were social science students, but the second group were ‘imams in training’ from the local madrasahs.

So why the big difference? There are a few possible reasons.

But there’s another factor that’s been shown to make a big difference. The religious students were actually tested in their religious schools. It might be that this environment, rather than their beliefs, made them contribute more.

The simple act of flicking up subliminal flashes of religious words can make people co-operate more, even if they are not religious. There’s some fascinating new evidence that religious environments can make people more co-operative, but that the effects are short-lived (more on that in another post).

What’s more, the religious students knew that their co-players were also from the same religious school. One effect of religion seems to be to increase in-group bonding (and out-group hostility) – see The Hand Grenade Experiment, for example. They might give more because they felt a closer affinity and loyalty to the other players.

So there is still research to be done on this. But what these studies does is add to the body of work showing the same thing. That simple belief in supernatural rewards (or punishment) doesn’t actually seem to have any effect on behaviour.

Religion can, it seems, change behaviour, but the reasons are not at all straightforward.

June 12, 2009
Out of control: how anxiety over loss of control can increase belief in God... and government!
Next Post