Out of control: how anxiety over loss of control can increase belief in God… and government!

Out of control: how anxiety over loss of control can increase belief in God… and government! June 12, 2009 Epiphenom

The recent meeting of the Convention of the Association for Psychological Science had a session on the cognitive science of religion. One of the presentations was from Kristin Laurin on work by her and Aaron C Kay at the University of Waterloo in Ontario.

I didn’t see the session, but I have dug up the papers describing their work, and it’s corking stuff.

What they set out to investigate was whether people who feel like they are not in control of their lives, and feel anxious as a result, turn to external supports to reduce their anxiety. In fact, what they suggest is that everybody has a preferred level of control that makes them feel comfortable. To reach that point, you can either convince yourself that you are in control, or you can convince yourself that the something else (God, perhaps, or a benevolent government) is in control.

If they’re right, then making people feel like they aren’t in control should increase their belief in and support for a benevolent God or government.

They’ve put together quite body of work in support of this. In the first paper they published last year, they showed in a bundle of related studies that this seems to be the case. For example:

The subjects compensated for their loss of personal control by increasing their belief that something else (God, in this case) was in control.

Kay and his colleagues also looked at data from the World Values Survey and showed that people who think they have no real control over their lives also think that governments should take more responsibility. Interestingly, the effect disappears in countries with corrupt governments.
Making people feel like they have no control also makes people resistant to change (but only for people who trust the government).

What’s more, it also works in the other direction. Reducing trust in the government make people more likely to think that they personally can have control over their lives.

They sat subjects in front of a computer, where they had to press a key to make a green circle appear. If they had first shown them a video portraying the government as incompetent at keeping order, then the subjects were more likely to report that they were in control of the circle (in fact, none of them were). 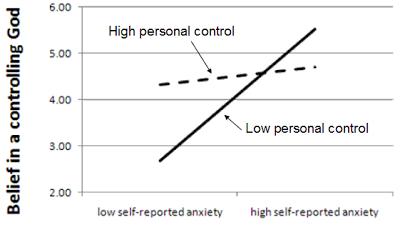 In the second paper, they take these ideas a bit further. What they wanted to show was that the anxiety only leads to an increase in God if your sense of personal control was threatened.

What they did was ask their subjects to visualise an anxiety-inducing story – something about being alone at night and pursued. For half, they story ended with them saving themselves by their own actions – they phoned the police. For the other half, the police just turned up. This was the group that had their sense of personal control threatened.

What they found is shown in this graph. People in the low personal control group who felt anxious after the story were much more religious than people shown the same story but who didn’t feel anxious.

For people who were made to feel in control, it didn’t matter whether the story made them anxious or not. It didn’t change their belief in God. 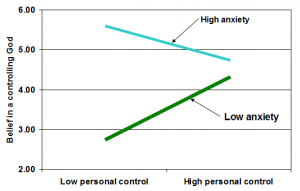 But there’s something interesting when you look closer at these results. You can see it easier if you change the x-variable. That’s what I’ve done in this second graph. Same data, just presented differently.

What could be causing this? Maybe it’s that the people who have the lowest levels of belief in god are those who stay chilled even when made to think about a scary story!

June 9, 2009
Why Theos wants us all to think more about death
Next Post

June 15, 2009 Are religious people more co-operative? How to prove what you want by careful experimental design
Recent Comments
0 | Leave a Comment
Browse Our Archives
get the latest from
Nonreligious
Sign up for our newsletter
POPULAR AT PATHEOS Nonreligious
1