Why Theos wants us all to think more about death

Why Theos wants us all to think more about death June 9, 2009 Epiphenom 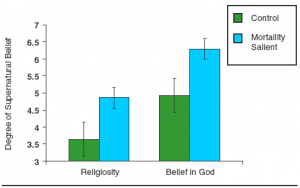 Theos is an evangelical advocacy group based in the UK. Their latest survey was on how much time British people spend thinking about death, and their conclusion was that we don’t talk about death nearly enough. Now, there are some interesting findings in the survey, as the British Humanist Association points out.

But a more salient question is why Theos wants to get us all to talk about death more? Why encourage people to think about death, when they seem perfectly happy (happier, even) not thinking about it.

The best demonstration of this comes from a cluster of studies by Ara Norenzayan and Ian Hansen, at the University of British Columbia.

In one study, half the participants were asked to write a paragraph about what they thought happens when you die. That got them thinking about death. The other half wrote about food. Then they did some unrelated stuff, and filled in a long questionnaire. Buried in the middle of the questionnaire were a couple of questions on how religious they were, and how strongly they believed in god.

Sure enough (as shown in the figure above), those people who had been made to think about death reported that they were more religious and had a stronger belief in God.

In another study, participants were shown three different versions of a story about a child, which were designed triggered thoughts about religion, death or a neutral scenario. They were then asked to read a news report about a scientific study of prayer. Those people who were manipulated to think about death found the study to be more credible and the efficacy of prayer to be more believable. Surprisingly, there was no effect in the people who were made to think about religion.

They did some similar studies with people who were adherents of other religions, including Buddhists, and found similar results. One interesting finding, however, was that death primes had no effect on the non-religious and atheists in the study group.

There are other studies that have found similar things, and the results makes sense. We know that religion is where people turn when they are frightened and afraid. But this study gives the hard facts.

When you make people think about death, not only do they become more religious, but they also become more open to religious claims. Fertile territory for an evangelical advocacy group!

June 6, 2009
Will the religious inherit the earth?
Next Post