Will the religious inherit the earth?

This month’s New Humanist has an interview with Economist journalists John Micklethwait and Adrian Wooldridge, who have a new book out arguing that the world is undergoing a religious revival (God is Back: How the Revival of Religion is Changing the World). Here’s what Micklethwaite says:

“We have seen that religion is not going away, that it is in many ways a partner with modernity and not in conflict with it. Many people in Europe, ourselves included, missed the signs that religion was coming back. It took 9/11 for us to take notice, but as a phenomenon it started well before. Even as a Catholic I grew up in an environment which completely accepted the notion that modernity and religion are incompatible – we all thought that if religion did survive it would be a kind of subtle Anglicanism, some version of a doubting Graham Greeneish religion. The evidence shows we were wrong.”

Most of it sounds like hand-waving stuff, but it’s an interesting question – and luckily there is some serious sociological research into it (not a lot, it has to be said). Most notable is Eric Kaufmann, at Birckbeck College London. I blogged on his latest research into secularisation trends in the US earlier this year, but he also has a recent paper looking at global secularisation (ref below).

What he did first was to look at how some of the key features of modernization (GDP and average education levels) relate to religiosity. What he found was that these developmental indicators predicted the levels of religiosity in poorer countries, but they were much less predictive in wealthy countries. 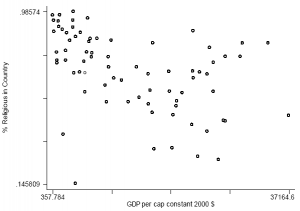 You can get a feel for what’s going on in this graph of the percentage religious versus GDP. Religiosity at first it declines with increasing GDP, but then the scatter increases so that, in wealthy countries, you can’t guess religiosity from GDP.

He then looked at personal factors that could explain religiosity. He found that richer people were less religious in both rich and poor countries

But people who have children or are married are more likely to be religious. What’s more, this effect was stronger in rich countries than in poor countries. Overall, personal factors in general seemed to be more important in rich countries. 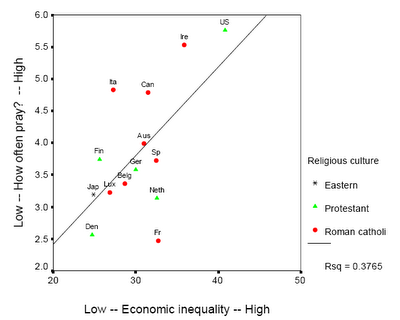 What this suggests is that increasing wealth doesn’t necessarily lead to increasing secularization. There is clearly some other unknown factors that cause these differences between wealthy countries.

One important one, which he couldn’t investigate for lack of data, was income inequality. His paper is built on earlier work by Pippa Norris and Ronald Inglehart in their 2004 book, Sacred and Secular.

They showed a striking relationship among wealthy countries between income inequality and how often people pray (this figure is from their book).

So increasing modernisation doesn’t necessarily lead to secularisation, but what about that other major demographic factor: birth rates?

Kaufmann shows not only that religious people have more children, but that this effect is particularly important in wealthy countries. What’s more, in poor countries, national average levels of religiosity also affect fertility: the more religious your country is, the more children you are likely to have.

As a result, trying to figure out what the future holds for secularisation is particularly tricky. What he suggests is that a model like the one on the right here might go some way to helping understand the process.

As ‘human development’ rises due to modernization, it results in less religion (in the right contexts) and also lower fertility.

Religion, on the other hand, increases fertility, and in a feedback loop fertility increases the numbers of the religious.

Given the right conditions, it could easily be the case that religious fertility tips the balance, and leads to a decrease in secularisation in coming decades. It all depends, I guess, on what the ‘conversion’ rate from religion to non-religion will be in low and middle income nations. And that, in turn, will depend on what those ‘other factors’ are.

Eric Kaufmann (2008). Human Development and the Demography of Secularization in Global Perspective Interdisciplinary Journal of Research on Religion, 4: Article 1