Of secularism and correlations

Of secularism and correlations June 5, 2009 Epiphenom

Well, my last post caused quite a stir – nearly a thousand comments on Digg and Reddit, plus the ones here and elsewhere on the web. If you’re one of the 60,000 people who stopped by yesterday, this post is for you. If you’re not, well business as normal tomorrow! (I’ve got a bunch of interesting studies to blog.)

Of the critical comments, a couple of themes that cropped up time after time, and so I want to take the time to respond to them: the first is the complaint that ‘atheism is not secularism’, and the second is that ‘correlation is not causation’.

Some people complained that it was secularism, not atheism, that was associated with peaceful societies. Never mind the fact that the data I showed was for atheists, this argument is actually comes from a misunderstanding of what ‘secularism’ means. Because the US is a secular state, some people have got the idea that secularism means only the separation of church and state, like in the US. That’s wrong.

Secularism can mean that, but it also has wider meaning, like the following:

In social science, secularization refers to the gradual reduction in religious faith that occurred in the 20th century, especially in Europe, that has lead to a secular society.

Correlation is not causation

Just because secular societies are also more peaceful, doesn’t mean that atheism is the cause, of course. That’s a valid point, and I certainly didn’t want to suggest that it is.

The irony is that I was showing just how correlation is not causation, a theme I talked about in an earlier post. Let me explain. There are a number of studies, mostly from the USA, which show that religious people score higher on a variety of prosocial attributes (they don’t take drugs, they a dutiful, etc). But there’s a simple reason for this. In a non-secular society, like the USA, dutiful people are religious. It’s expected of them.

So the idea that we should spread religion to make the world a better place is based upon dodgy correlations. The analysis I posted helps to show that. Secular societies are, in many ways, better places to live than non-secular ones.

Now this doesn’t mean that atheism makes for better people. Certainly not. We know that stressful situations make people more religious (and I have a couple of posts coming up on that topic). But it does suggest that better people tend to be atheists. That probably explains a large part of the correlation. 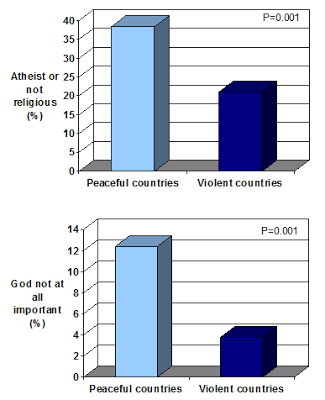 Well, thanks for sticking with this pretty self-indulgent post so far, but I wanted to clear up those couple of points. As a bonus, here’s a couple more stats, treated in the same way as previously. The first is the percentage of people who say they are not religious, added to the numbers of outright atheists. The second is the percentage of people who say that god is unimportant in their lives (they rated 1 on a 10 point scale, so these folks hard hardcore atheists).

Incidentally, the p numbers I put on the graphs are a measure of probability. You can think of it as the odds of getting that result by chance (statisticians: it’s not quite that, I know!) I calculated them using a two-sample t-test assuming unequal variances.