If religion makes you more honest… 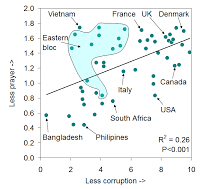 …why is it that the most corrupt countries are also the most religious? An earlier post describes evidence that religious beliefs can affect honesty. Implanting subliminal religious messages, and making people feel like they are being watched by supernatural entity, both can act to make people behave more honestly.

But there is a lot more to religion than this, of course. And advocates of religion would have us believe that more religion equals a better, more honest society. This is a claim that can be tested – by looking at country differences in religious fervour and corruption.

In the graph, frequency of prayer (an average of how often people report praying, taken from the World Values Survey and International Social Survey) is plotted against the 2001 Corruption Perceptions Index. As you can see, there is in fact a weak (although very statistically significant) relationship between the two. The perhaps unexpected result is that the relationship is the opposite of what religious advocates would have us believe. As religious fervour in a country goes down, so does corruption. More religion equates to more corruption, not less.

There’s another interesting feature of this plot: it’s that all the ex-communist nations tend to cluster together. They all tend to be both highly secular and highly corrupt. Corruption under communist rule was probably endemic (there are no good figures), but there is also evidence that, with the social and economic turmoil that followed, corruption increased still further (See Sandholtz & Taagepera, “Corruption, Culture, and Communism”):

Communism created structural incentives for engaging in corrupt behaviors, which became such a widespread fact of life that they became rooted in the culture in these societies … The transitions toward democracy and market economies have not yet erased this culture of corruption. In addition, the process of privatization itself has opened myriad opportunities for corruption.

Within the group of post communist countries, there doesn’t appear to be any relationship between religious fervour and corruption. Religious Poland, for example, is no more corrupt than secular Bulgaria or Czech republic. Post-communist countries are likely to be a special case, therefore, obscuring the underlying relationship. Excluding them from the graph (as shown on the right) shows a dramatic and strong relationship between religiosity and corruption.

The question then remains as to how these factors fit together. Does low corruption stimulate economic growth, reducing poverty and so reducing the importance of religion in people’s lives? Or does secularisation reduce corruption, thereby stimulating economic growth?

Sandholtz & Taagepera analyse the data and find that, for non-communist countries, both secularism and wealth play a role. Using factors derived from the World Values Survey, they find that a factor related to secularisation and a factor related to wealth (the the survival/self-expression dimension) both contribute to decreasing corruption, although the impact of the self-expression factor is about twice that of the secularisation factor.

The take home? Secularisation probably does decrease corruption. And it certainly doesn’t increase it.

April 11, 2008 Sham medicine works better if you care
Recent Comments
4 Comments | Leave a Comment
Browse Our Archives
get the latest from
Nonreligious
Sign up for our newsletter
POPULAR AT PATHEOS Nonreligious
1