When did moralising gods emerge? 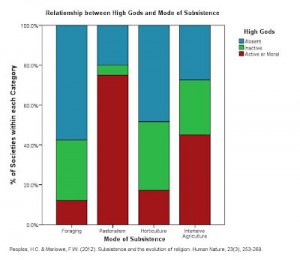 Looking at societies cross the world, you’re stuck by the enormous variety of mystical beliefs out there – to the point where, infamously, even trying to come up with a definition of religion that everyone agrees on is pretty much impossible.

Yet there are common themes. Many societies do believe in some kind of chief god, and many of those believe that this god is some kind of parent or leader figure – one that takes an interest in his people, and punishes bad behaviour.

So the question is, do societies vary in some systematic way? Is it, as some people have claimed, that complex societies lead to the development of moralising gods?

Hervey Peoples and Frank Marlowe, at the University of Cambridge, have set out to test this statistically – no mean feat.

They used a something called the “Standard Cross-Cultural Sample“, which was created in 1980 and which provides an unbiased sample of the worlds societies – representing every region, language family, and cultural area. They’re predominantly pre-industrial.

They categorised each society according to whether they believed in an active High God (a single, all-powerful creator active in human affairs and supportive of human morality), a High God that is inactive or remote, or no belief in any High God.

All of this fits nicely with the hypothesis that moralising gods are an invention of large, structured societies. But what about pastoralists?

Even more important, I think, is that pastoralists have a source of transportable wealth – their cattle. That means that they are vulnerable to attack from other pastoralists (and, indeed, can gain from attacking other groups). And that in turn means that their groups must be cohesive and well-organised to survive.

In other words, they have a very great incentive to punish free-riders and cheats. If a forager goes off the rails, no-one really suffers except him. For a pastoralist group, however, sticking together is all important.

At first blush, all of this is in line with other research that links the emergence of complex societies to the invention of moralising gods. However, that’s not quite the case.

The previous research showed that ‘world religions’ are linked to altruism towards anonymous strangers. In practice, that means breaking down inter-group barriers.

This new research seems to show that moralising powerful gods are linked to stronger group cohesion.

Now, those two results are actually in conflict. But they do reinforce the fact that religious beliefs do not act in a straightforward way.

It seems likely that their effects are quite context dependent – a conclusion, of course, that’s borne out by a lot of other research!

September 7, 2012
Why is there something rather than nothing?
Next Post