Cultural transmission of religious violence: is it inherited or diffused 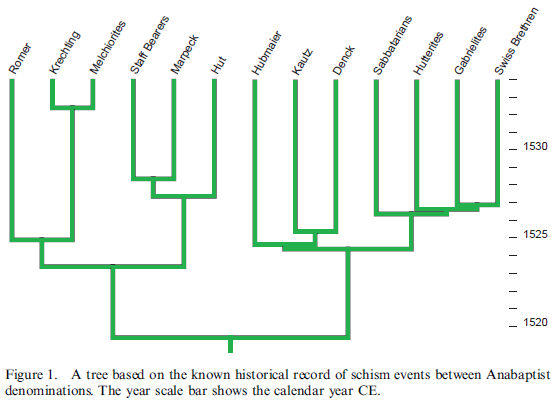 In 16th century Europe, a radical new Christian movement arose – the Anabaptists. Although the history is murky, it seems that the new sect began in Zurich, and then rapidly fractured into a collection of splinter sects.

Some of these groups (around half), advocated the violent overthrow of government and existing churches to establish a theocracy. The other half, although often sharing the same ultimate goal, were non-violent.

Luke Matthews, an anthropologist at Harvard University, was interested in what governed whether a particular group was violent or pacifist.

In particular, he wanted to know if the most important factor was whether the parent group advocated violence, or whether the personal relationships between the groups that mattered more.

So he analysed the different groups, using a statistical technique borrowed from evolutionary biology, to see if inheritance was important. He also looked at whether the leaders of the congregations knew each other personally, and whether that had any influence over shared attitudes.

What he found was that, for violent beliefs, the most important factor was whether the groups shared a common inheritance. Violent groups, it seems, beget violent splinter groups.

That wasn’t the case for other theological beliefs – for example, whether they observed Sabbath on a Saturday, or practised polygamy, or believed in purgatory. All of these were better explained by personal connections between group leaders.

So it seems that while religious ethical beliefs diffused from one group to another, attitudes towards violent revolution were inherited.

Quite why that would be is not clear – although to me this suggests that attitudes towards violence must define what each group is about is some fundamental way. Whereas other beliefs are up for negotiation, belief in violence or pacifism is not.