The rising tide of religious protectionism in the West

The rising tide of religious protectionism in the West September 22, 2012 Epiphenom

In the West these days we’re used to a familiar narrative about growing rise of non-belief. Poll after poll has been clear: most countries in Europe, as well as Australasia, are either largely non-religious or becoming markedly less so. Even in the USA, there is now a clear trend towards lower levels of personal belief, especially among the young. 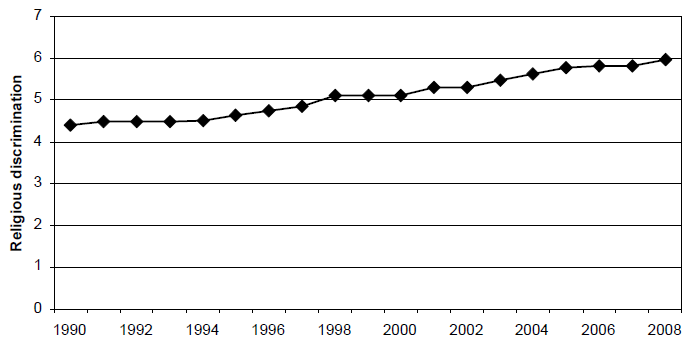 But that’s not the full picture, not by a long chalk. There are many different ways to look at whether society is ‘secular’, and one of the is to consider whether religion plays a role in the public sphere.

To assess this, Jonathan Fox, a Political Scientist at Bar-Ilan University in Ramat Gan, Israel, has looked at trends in governmental religious policy over recent years (Fox was also the author of the ‘clash of civilizations’ study that I wrote about back in July).

When he looked at discrimination against minority religions, he found a clear trend. As shown in the graphic, the average level of religious favouritism in the west has been increasing. Fox found that:

The most common restrictions are on building, maintaining or repairing places of worship and registration requirements for minority religious institutions. Also, over a quarter of Western European countries place restrictions on proselytizing by foreigners. For example, Austria, Belgium, Denmark, Switzerland, and the UK require special visas for missionaries and/or religious workers and/or have denied such entry to some missionaries or religious workers.

He also found that this trend is quite widespread. Almost all countries (including the USA) engage in at least some form of religious discrimination, and since 1990 discrimination has increased in 12 out of 27 countries assessed (and gone down in only 2).

The second of Fox’s findings was that, on average, governmental support for religion has remained constant over this period – although it increased in seven countries and decreased in eight. He comments:

For instance in 2008 Spain stopped making direct payments to the Catholic Church and Sweden, in the context of removing its official religion in 2000, eliminated some laws. On the other side of the coin, Luxembourg began funding ‘recognized’ religions in 1998 and during George W. Bush’s presidency, the United States began more systematically funding faith-based charities, a trend that had begun more tentatively and with more restrictions under previous administrations.

Although Fox focuses on Western Europe, it seems like this is a worldwide phenomenon. The Pew Centre recently reported that religious discrimination, as assessed by several different measures, has increased around the world in recent years.

I look at these data and what I see is a backlash by the political establishment against the loss of religious faith. Almost all of the increase in religious legislation has been to increase state funding for religious enterprises.

Fox acknowledges this perspective, but demurs:

The simplest interpretation is that this is part of a larger trend where religion is remaining important and perhaps increasing in importance. Another interpretation is that this government sponsored support for dominant religions is a compensation for declining religiosity and religious identity. If this is the case, this would mean that politicians in democratically elected governments in supposedly secularizing societies still think supporting religion benefits their political careers. This implies that there is still a strong political base supporting these policies.

I think that’s true – and you should remember that even in countries with a lot of atheists, most people are still religious and even those who are minimally religious still identify with a faith from a cultural perspective. Plus, of course, politicians are of the older generation, which is more religious than the youngsters (and, compounding the problem: young people don’t vote).

So there are still plenty of votes in religion.

But what about discrimination of minorities. Well, again to me this looks like the dominant culture protecting their own. In particular, hostility towards Muslim minorities in Europe seems to be driving legislation that is specifically attacking minority faiths.

This discrimination is less about religious fervour and more about hostility to immigrants.

Fox agrees, but with some nuances:

In the case of the increasing religious discrimination, it is possible to argue that this reflects a desire to maintain the dominant culture, security concerns, and, perhaps, protect citizens from potentially dangerous and predatory ‘cults’ or ‘sects’. However, the specific restrictions do not materially add to security and by agitating minority populations they likely increase security risks … these policies seem more consistent with a desire to protect the religious status quo.

Put differently, if religion was not important in the West, the introduction of new religions with small followings into a country should be met with apathy, not resistance

In other words, however you read these data it’s clear that religion is still important in the West. In fact, religion is important enough for governments to take increasing steps to try to protect it!

September 16, 2012
Cultural transmission of religious violence: is it inherited or diffused
Next Post

September 26, 2012 Subconscious religious predjudice in children
Recent Comments
0 | Leave a Comment
Browse Our Archives
get the latest from
Nonreligious
Sign up for our newsletter
POPULAR AT PATHEOS Nonreligious
1