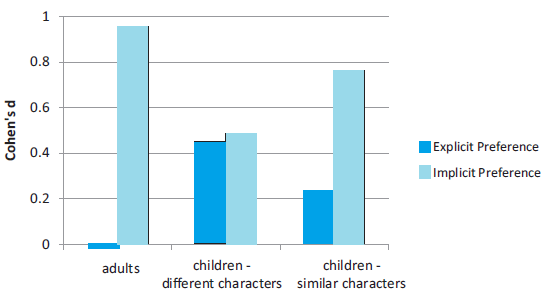 We know that religious affiliation is one among many markers of group identity. But if you ask typical adults, they will insist that they are not prejudiced against members of other faiths. However, if you measure their subconscious reactions, you can reveal hidden biases.

In other words, adults know they are not supposed to be prejudiced, but deep down they often are.

But what about children? Larisa Heiphetz and colleagues, at Harvard University, ran a series of studies to find out.

The basic gist of these was that they showed the kids pictures and pictures of two children – one Christian, and one either Jewish or Hindu. The children were matched (same race etc), but the stories about them were tweaked either to emphasise differences or similarities).

Then they asked the kids their opinions of the two test children. They also ran something called the Implicit Association Test (IAT), which is a test designed to uncover subconscious prejudice.

What they found was that when the characters were presented alongside an explanation that pointed out they were different (for example, by highlighting the differences between Hinduism and Christianity, or by having the Christian child say that aspects of Judaism were silly), then the children showed a marked explicit, conscious prejudice.

That’s quite different to the adults, who try to maintain they have no prejudice against other religions.

When they glossed over the differences, however, the children’s explicit prejudice ebbed away. But their subconscious prejudice remained – if anything it was even higher.

What Heiphertz and colleagues conclude is that these mostly Christian children, like adults, have an implicit pro-Christian bias. Unlike adults, however, they are happy to admit to their bias, when they recognise it themselves.

What was unusual, however, was that the children did not even need to understand the differences between the characters in order to show a subconscious bias. As they say:

In cases where children are asked to choose between characters whose religions are similar and familiar, the IAT may tap preferences of which the children are unaware or which they may not yet be able to articulate.

So prejudice against other faiths is so deeply ingrained that it can have an effect even when these kids can’t consciously identify any important differences between children of different faiths!

September 22, 2012
The rising tide of religious protectionism in the West
Next Post