Why did science founder in the Islamic world?

The third and final part of the rather excellent BBC series, Science and Islam, presented by Jim Al-Khalili, is now available on YouTube (as well as on BBC iPlayer, for those in the UK). Most of the series has dealt with what is now uncontroversial – the enormous and diverse range of contributions to the sum of human knowledge made by medieval intellectuals in the Islamic world.

But the third programme touches on a rather more controversial topic: why is it that the scientific revolution occurred in Europe, and seems to have largely passed the Islamic world by? (Even today, scientific output in Islamic countries is dwarfed by that of other countries – Scimago Country Rank.)

According to Al-Khalili, the answer is simple – as he explains in Part 6. The discovery and colonisation of the New World in the 6th century led to an influx of wealth into Europe – and as he says, ‘big science requires big money’.

But this idea, although attractive and probably true to some extent, is fundamentally flawed for three reasons.

Firstly, the New World brought enormous wealth to the dynasties of Spain and Portugal. But these two countries contributed little to the scientific revolution. Take two icons of modern science – Copernicus, who revolutionised astronomy, and Vesalius, who did the same for anatomy (and hence medicine). Compare, for example, Vesalius’ 1543 drawing of the digestive system (below) with that of a Persian anatomist a century later (right). Copernicus was a native of Poland, while Vesalius was a Belgian who took up residence in Paris. 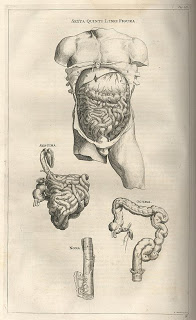 And the hot bed of the Renaissance was, of course, Italy. Although Italy was wealthy, it was wealthy not because of colonisation of the New World, but through trade with the old – and in particular the Islamic – world. In fact, the Italian city states sometimes found themselves siding with Islamic states in an effort to resist the growing power of Portugal over the spice trade (for example, at the Battle of Diu).

And thirdly, the Islamic world did not do big science, even when it was fabulously wealthy (as the Ottomans were, at the time of the Renaissance). Al-Khalili cites the example of the Maragha observatory, which was indeed for a period a triumph of scientific endeavour. But it was for only a very brief time. It lasted only around 50 years before being abandoned, a sure sign that it lacked institutional support. In fact, there are no direct Islamic equivalents of the European Universities.

And according to Toby Huff, a historian of science and Islam at the University of Massachusetts and author of The Rise of Early Modern Science, the explanation for this discrepancy lies at the heart of why science exploded in Europe and not in the Islamic world (nor, for that matter, in China).

The major factor seems not to have been religious, or monetary, but legal. It was the invention of the corporation.

The 12th and 13th centuries were a period of rapid innovation in European legal systems as, beginning with Gratian’s Decretum, lawyers struggled to reconcile a mass of ad hoc laws derived from Roman, Germanic, and Church codes. One outcome was the formulation of the idea that institutions could be treated as legal entities, with their own special rules and regulations. Joseph Lynch, Professor of History at Ohio State University, explains it like this (The Medieval Church, p331):

In the twelfth and thirteenth centuries, the canon lawyers had created a body of legal opinions and laws dealing with the problems of corporate bodies, a very important issue since church’s institutions, including monasteries, cathedral chapters, hospitals and even the college of cardinals, were corporations that chose members, elected officers, administered income, owned property and could sue and be sued. A key element of the canon law of corporations was that the interests of the corporate group should not be damaged by the actions of its officers. The officers held their authority for the good of the group and the corporate body could protect itself from incompetent or malicious officers, as a last resort by deposing them.

It was this legal framework that gave rise to the modern University (‘university’ was an early alternative legal term for ‘corporation’). The first of these, the University of Paris, was established in 1215. Huff says:

The legal autonomy that existed in the European universities did not exist in the Muslim world because the legal concept of a corporation, a groups of actors treated as a collective whole, did not exist. This legal defect had major implications for Islamic civilization, not least in the sphere of economic development, as Timor Kuran has made clear. (Huff: Reply to George Saliba)

This legal concept was critically important because it gave scholars in the West a legal status, as well as legal protection. It also meant that certifications were controlled by these corporate bodies, rather than being handed out by individual teachers. In the west, you got your degree from a university. In the Islamic world, you got your certificate from your teacher.

There were, of course, colleges (Madrasas) in the Islamic world, but these were constituted in a fundamentally different way. There was no separation from the Church or from the State. There were no formalised degree programmes. There were no formalised methods for judging standards. There was no faculty (who, in Western Universities, comprised the corporate body). In short, there was not the legal framework to support the sustained body of disputation and learning that could be achieved in a University.

To be sure, this is not a full answer. There were many other factors, especially philosophical, which are also discussed by Huff. But the essential lesson is that, for science to blossom, it is not enough to have a series of brilliant individuals and wealth enough to support their curiosity. You need to have a framework that enables those individuals to feed from each other. What Europe developed, and the Islamic world did not, is the idea of the scientist as a social actor. Huff again (Rise of Early Modern Science, p18):

…scientists – ancient and modern – are not isolated practitioners sequestered in laboratories but cultural actors whose very existence relies upon multiple others who (1) provide essential institutional support in the form of teaching and research opportunities, (2) provide vehicles for the publication of scientific results, and (3) provide tacit support both for the role of the scientist and for the values and worldview of the scientific enterprise.

In other words, for science to blossom it is not enough to have scientific individuals. You need a scientific culture.