April 5, 2009 by Epiphenom
0 Comments
Secularisation in the US will be swamped by religious fertility and immigration April 5, 2009 Epiphenom 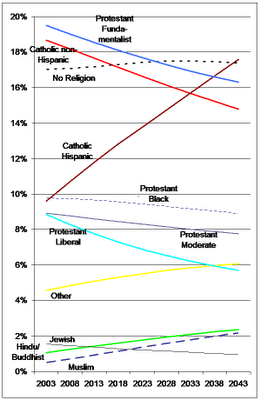 There was a lot of noise recently about the ARIS survey, which showed a dramatic increase over the past decade in the numbers of non-religious Americans.

So, what does the future hold? Ever more secularisation? Perhaps, if people continue to switch out of religion.

But the demographic picture is more complicated than that. Religious people have more children than non-religious. Sure some of their children will lose their faith as they reach adulthood, but only a minority.

Then too the USA is a nation of immigrants, and immigration continues at a high rate. Immigrants tend to be more religious than the natives (they tend to come from poorer, more religious countries).

The Association for the Study of Religion, Economics, and Culture is just concluding its 2009 conference in Arlington, Virginia. Among the presentations was one by Prof Eric Kaufmann of Birkbeck College, London.

Using estimates of switching, fertility, and immigration for the religious types, he’s put together a projection for what the religious picture will look like in the USA in 2050. Here’s what he concludes:

The ‘culture wars’ that play such an important role in US politics will be affected. Kaufmann predicts that opinion on abortion is likely to become more pro-life, but that attitudes regarding homosexuality will be stable, reflecting more liberal attitudes among younger cohorts but more conservative attitudes among demographically-growing groups.

Of course, there are a number of assumptions that have to be made to make these kinds of predictions. Will the switching out rates change? Will the composition, never mind the scale, of migration change? I reckon so.

Nevertheless, it seems reasonable that the broad picture will not look so different. There is no impending mass secularization of the USA. Fertility rates and immigration will overwhelm conversions.