How not to cure headaches 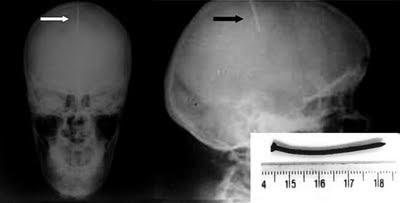 Here’s a rather painful case reported in the Singapore Medical Journal – a 45-year old woman brought into hospital unconscious. The doctor explains:

The relatives revealed that she had been suffering from a headache (more on the right side) for the last ten years, with off and on exacerbation. They took the patient to a Tantrik, who hammered the nail into her head to get rid of the bad omen.

Now, a Tantrik is a Hindu spiritualist, something like this fellow on the left. But, as far as I can tell, the ‘nail in the head’ option is not standard tantrik practice.

What it does have a lot of similarities to is trephination, which is not only one of the oldest known forms of surgery, but also one that was taken quite seriously into the modern era (until people started demanding evidence that it actually worked). I guess it just seems intuitively reasonable – if you have a headache, you need to make a hole in your skull.

There was a happy ending to this story. They successfully removed removed the nail, and the lady concerned recovered consciousness and seemed to be doing well.

They don’t report whether her headaches stopped.