Nonreligious girls are the most athletic

Nonreligious girls are the most athletic December 5, 2011 Epiphenom 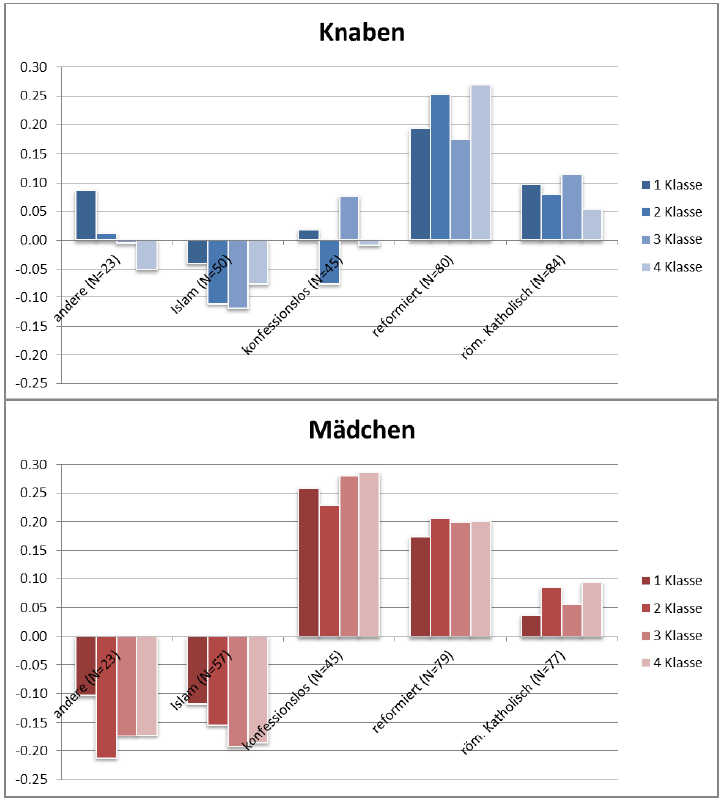 When I first read of this study, I was intrigued. According to this news report (which seems to have been picked up by a few other places over the last few days), “children with no religious background tend to be the most skilful athletes”.

So I contacted Andreas Krebs, the study lead, and got hold of a copy of the original report (it’s available online here – in German). You probably won’t be surprised to hear that the results don’t exactly support the news headlines, but they’re all the more interesting for that.

The study basically records the athleticism of first-grade school kids (7-8 years old) in the small Swiss city of Winterthur. The battery of tests included things like running, jumping, stretching and tapping (yeah, beats me too).

They broke down the results in a few different ways – religion is just an incidental part of the report, near the end.

The figure shows the results: boys at the top, girls at the bottom. The separate bars show the results for 4 sequential years.

The non-religious kids are in the middle. To the left are the Muslim kids, to the right are Protestants and then Catholics. The size of the bars shows the z-score – basically how far above or below average that sub-group is, relative to the group as a whole.

Why should that be? Well, I think the clue is in the particularly low scores for the Muslim girls (and other minor religions). These girls are often restricted by their culture from fully participating in sport.

Does the same apply to Christians, but to a lesser extent? If so, then that would explain the results.

Non-religious parents, on the other hand, seem to be not particularly sports-minded, but are completely non-sexist when it comes to encouraging their kids. As a result, their boys have only average ability, but their girls are way above average.

December 1, 2011
Why do the religious give to charity: learning from Taiwan
Next Post