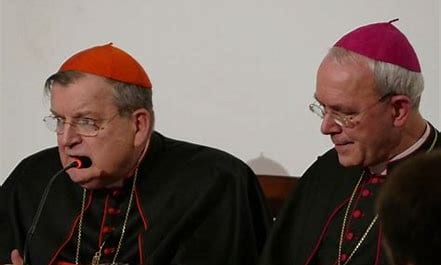 A Heresy For Our Times

Once, it was just grumpy alt-right conservatives complaining about the liturgy.  Then, it became radical rightists adding lists of perceived sins against orthodoxy by the official Church.  Finally, it has become a full blown heresy separating itself from the Roman Catholic Church which has handed down the faith unbroken for 2000 years.  Its name:  The Rad Trad Heresy, short for the Radical Traditionalist Heresy.  I may be the only one to have labeled it thus far, but I think my position is tenable.  Some have called this pattern of thought schismatic, but the time has come for it to be condemned for what it is; namely, a perversion of truth masquerading as a return to the one true faith of Jesus Christ. One caveat: this particular heresy does not include conservative Catholics or even those who identify as traditional Catholics.  This heresy is is far to the right of them and no longer deserves to be included in mainstream Catholicism.

Heresies are comfortable things.  They are always the easy way out of difficulties the Church might be facing in any historical age.  Heresies offer simplistic answers to complicated problems.  They almost always sound correct and proper and, just as often, the official Church is tongue tied at the beginning of a heresy when trying to battle heresies’ pernicious lies. The Church is almost always caught unaware and takes some time to catch up while the heresy already has had quite some time to formulate its beliefs.

What’s The Rad Trad Heresy All About?

What does this Rad Trad heresy seek to do?

It seeks to stop the confusion in Catholic teaching among the faithful particularly in the areas of liturgy and morality.

Who are the spokespersons of this Rad Trad heresy?

There are several individuals who propound several of the heresy’s propositions.  I am uncomfortable saying that they are the founders of the heresy.  Yet there are two public teachers of the faith who should be called out as cheerleaders for many of this heresy’s viewpoints.  I refer to Cardinal Raymond Burke and Bishop Athanasius Schneider who have taken upon themselves the mantel of papal correctors and inquisitors of all things they label evil in the Catholic Church.  Both of these ecclesiastics seem too bright and learned to be labeled heretics but lately they have been skating very close to schism in their public utterances.

What do followers of this heresy actually believe?

Under the banner of The Rad Trad Heresy are the following beliefs:

Most Serious Error Is View Of Human Nature

The crucial teaching condemning the traditional Catholic anthropological view of human nature as basically good is the lynch pin of The Rad Trad Heresy.  The heretical teaching cannot get away from its negative view of humanity.  To say that Christ came to save humanity because he found it worth saving would be like chewing ashes for a Rad Trad.  This heresy subscribes to the Protestant vision that Christ came to save us even though we all deserved to be damned.  Catholic orthodoxy accepts our sinfulness but says Christ came to save us because he found us worth saving.  The Rad Trad Heresy comes close to a Calvinistic predestination vision for people who it sees as truly radical sinners, most visibly the homosexuals and, now, those in non-sacramental marriages.  Their list is open to new members.  No matter what these sinners do, short of a complete rejection of their life-style, a sure and final damnation awaits them.

That anthropology sets the stage for a radical revision of the person and purpose of Jesus.  Jesus becomes an object to be adored in the Blessed Sacrament, not the dynamic Savior intimately involved in people’s lives.  Christology, down through the ages, has always swung between a belief in a too human Jesus and a too divine Christ.  That’s a poor word choice, granted, but it serves to show how difficult it is to keep the Chalcedonian definition of Jesus as totally God and totally human, 100% divine/100% human.  Rad Trads eschew Christ’s humanity and in doing so, reject Christological orthodoxy.  Scripture takes second place to its new replacement–Mariolatry.

Dispose Of Mary’s Traditional Role; Invent Her As Apocalyptic Prophetess

When the Rad Trads separated the Blessed Virgin from her scriptural basis as the one who brings Christ to the nations, they invented her as an apocalyptic prophetess of the final days. Apocalypticism, when it is scriptural, has a valued place in Catholic orthodoxy, but Mary as a figure of the apocalyptic end times is not scriptural.  Her appearance in the Book of Revelation is that of the Mother of the Church, not the begetter of the end times. Mary is raised to an almost divine status, eclipsing her Son and becoming the focus of people’s honor and devotion to the detriment of her Son. Many active Catholic lay people, however, are attracted to its “damn the world, bring on the apocalypse” mentality.  Although simply an observation, many dioceses have more public talks on Fatima and Mary then they do about Jesus and Scripture.  People are attracted to apocalypticism and, as always in the past, Church leaders have to carefully educate the faithful on an orthodox way to hold the end times.

The Rad Trad Heresy denies the goodness of humanity, the human nature of Christ, and the authority of the pope. It is a poison to the hearts of all faithful Catholics. There is more, but these are the salient points of The Rad Trad Heresy.  No doubt as time goes on, these points will get further clarified.  A question remains about how many people actually subscribe to such a heresy.  Its predominant presence rests in social media and fringe alt-right Catholic publications and lay conferences throughout the United States. Many of these people now hold leadership positions in the Church and in society.  This gives them a voice out of proportion to the rest of the laity, but their influence should not be underestimated.

My purpose in this opinion piece is to raise issues for discussion.  As time goes on, I will have to further refine what I believe The Rad Trad Heresy to be.  But I would find it helpful if others would join in the discussion.  What has moved me to write is the tremendous disrespect for the Holy Father now coming from the voices of this heresy.  For the life of me, I have studied Pope Francis’ speeches and teaching and I cannot find a single heretical view among them.  It amazes me that some proponents of this new heresy even think he is not the official pope.  I love my faith and union with the Bishop of Rome is essential to fidelity.  So I write and learn.

September 18, 2019
BLESS ME FICUS FOR I HAVE SINNED
Next Post

October 6, 2019 Amazon Synod--End Of Church?
Recent Comments
175 Comments | Leave a Comment
Browse Our Archives
get the latest from
Thin Places
Sign up for our newsletter
POPULAR AT PATHEOS Catholic
1

Catholic
The Two-Edged Sword Of Hypocrisy--The Archbishop And The...
Thin Places
TRENDING AT PATHEOS Catholic