I saw a surprising interview this weekend during the March for Our Lives gun violence protest. CNN gave the March wall-to-wall coverage and featured many of the survivor sand victims’ family members in interviews. There’s a lot I don’t agree with in terms of rhetoric and approach with much of this movement, however I think it’s always good to find common ground and point out the positive when you do see it.

The mother of slain teacher Scott Beigel told CNN’s Alisyn Camerota about a call she received from Senator Marco Rubio, who has been demonized over and over many of the most vocal voices a the March. Rubio, who is one of the few pro-gun politicians who has entered the Lion’s Den of the debate and been really willing to put himself out there in conversation, is doing more than a lot of others. It’s incredibly frustrating to watch the insanely hateful words being thrown at good people standing for what they believe in and trying to find solutions on a very difficult issue.

Linda Beigel Schulman — who considers herself part of the gun control movement — said she spoke to Rubio for 45 minutes, reluctantly at first. But, as you can see in the interview, she said it was “so amazing” and was “pleasantly surprised” by the conversation — and moved by his desire to take meaningful action and find common ground.

“He talked to me about…you know, if there are 10 issues…and five of them we all agree on, why don’t we pass those five and then let’s debate the other five? And at that point, had me,” said Schulman.

She also said “we need to get past” the focus on how much money politicians are taking from the NRA, a point that some of the Parkland students and others in the movement continue to harp on. I couldn’t agree more and think that it would only be to the benefit of gun control advocates to have genuine conversations with those on the other side, rather than demonize them.

Yes, politicians take money from the NRA…and teachers unions and Planned Parenthood and all the other lobbies out there. That’s part of politics, but it doesn’t define what politicians believe or take action on. Lobbies give money to politicians who ALREADY support their cause…because they want those politicians to remain in office. It’s not that lobbies give the money hoping to turn politicians toward them. If that were the case, why wouldn’t they be “buying off” pols on both sides? But I digress…

Marco Rubio isn’t standing up for what he believes in on gun rights because the NRA gave him some money. He’s doing it because he genuinely believes in the policies he’s advocating, which by the way are more in line with the gun control movement than many other Republicans right now. In fact, he’s proposed SIX bills since the Parkland shooting, aimed at preventing another attack of this kind. They may not be exactly what March for Our Lives protestors want, but he’s taking action…including supporting a bill to raise the legal age to buy a gun to 21.

We need more people like Schulman, willing to listen when folks like Rubio reach out and stop robotically demonizing everyone who might disagree with you 100%. And we need more politicians like Rubio who are willing to compromise and find common ground. That’s not always an opinion in line with conservative thought but I’ve become more moderate over the years and…well, you wouldn’t be surprised to know I was a Rubio supporter for 2016 (RIP, 2016…)

Perhaps Schulman should have a pow-wow with some of the student speakers out there whose hateful rhetoric is actually hurting, not helping, their cause. 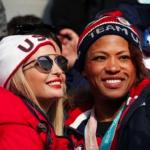 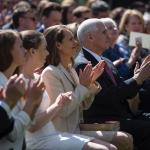 April 16, 2018 Samantha Bee Joke About Mike Pence's 'Personal Hell' is Completely Inaccurate
Recent Comments
0 | Leave a Comment
Browse Our Archives
get the latest from
Politics Red
Sign up for our newsletter
POPULAR AT PATHEOS Politics Red
1