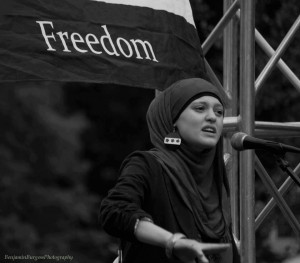 One of the strongest young voices speaking about the Syrian crisis is a young poet, living in Denver, named Amal Kassir. Her mother is from Iowa, her father from Syria, and justice — political justice, social justice — is a theme that has been on her mind since childhood, when her parents would take her to Palestinian rallies, and talk about war and famine in the land of her origin. Kassir now delivers her poetry across the United States — when I saw her at NYU’s Islamic Center in New York, she had the audience in what seemed like breathless silence — and is planning a tour to Jordanian and Turkish refugee camps. Over the five years that she has been performing, Kassir says, her poetry has become a prayer of justice.

Erik Campano: A “prayer of justice”… To whom is your poetry directed, then? God? The audience? Yourself?

And these various indirect objects can blur into one another as well, no?

Absolutely. The stage is a very powerful thing, and people become the poem, as it’s being read if the poet can own the stage — I’ve seen it happening, where athiests will say “Amen” to a prayer, or inspiration will hit the most distant of souls.

My coach, Ken Arkind, would tell the Minor Distrubance Poetry team before we went on stage, “you’re doing this for those who cannot speak.”

Who are those people who cannot speak, precisely? Those caught up in the Syrian civil war? Women dealing with the Western tendency to objectify and commercialize the female body? Or are you speaking, perhaps, more broadly — for everyone — or specifically — for particular people close to you in life?

It’s the starving child in Uganda as well as the American Muslim that is afraid of wearing hijab; it’s Syria; it’s the south side of Chicago — anyone who is oppressed. There is so much oppression everywhere and oppression is what fuels my pen; that is all that I can write for. My poetry is never magical happy; it stems from the reality of war and bloodshed and starving children and corrupt politics.

Certainly, however, in suffering there is beauty — or at least, after the suffering is over, there can be happiness. “There will be a time when we can eat together // When we will build homes out of abandoned tanks // … // We will sip from the cups made of old grenades” — is there no magic in such spiritual redemption?

Hope is what people have left in this world. It’s magic, but the kind of magic no justice system run by men can bestow.

Who bestows it, then?

Truth. Whether someone wants to call it God or Evidence or Spirituality or whatever.

The other day a woman put her fingers around my neck to strangle me because she was across the street from us at a rally, We wanted intervention. She did not, and threatened me.

For once though, I was literally fearless. I was not afraid because I knew what I was fighting for.

There was a lot of Pro-Bashar anti-Bashar aggression, and I’ve seen so many people drop out of the race when it gets too much.

But look at the Syrian people. Look at that the Brazilian people. Look at our Occupy movement! Even when the world gives up, people keep fighting because they believe in it. It is Truth; it is the bestower of justice; it makes revolution flower. It keeps people alive, like Hamza Khatib and Trayvon Martin.

There’s a lot of people who don’t have the courage to get up on a stage and speak. There’s a lot of people don’t even have anything to speak for, but when you find the things that makes your heart beat faster, and you are granted a spot in front of a microphone, and you speak to people who’ve never heard your words before, you are delivering a narrative, a piece of evidence to a story.

One of the things that immediately strikes your audiences is your steadfastness in speaking directly to those who would mortally threaten you. //You can shoot, blood, push, stab, rape, bomb, break me // I will not fall // Stalin, McCarthy, Hiroshima me // I will not fall. What does “not falling” mean here? Is it that you live in the memories and stories of others, like Hamza or Martin? Or is it more of an observation about the spiritual state of a soul who dies for justice? Or something else?

“We will speak until throats are raw, until all of Syria is in the news”. Not falling refers to keeping the spirit of the struggle alive, no matter how hard you have to fight. Look at the Syrian people: for two and a half years their world has been massacred but have they stopped chanting in the streets for freedom? Never. They cannot fall. They will not fall.

Is there any way in which you can generalize how various groups within Syria reacted to your poetry? Sunnis? Arawites? Kurds? Christians? Leftists like the National Coordination Committee?

It’s hard to say. I don’t think the differences in reaction were a result of various beliefs being different. There are Alawites who are against the regime, Christians who love Syria and want peace, and there are Sunnis loyal to Assad. The reactions are relative to the person and their relationship to the regime’s oppression. My beliefs have been reaffirmed that you don’t have to be of a specific sect or religious group to recognize tyrannical autrocity.

But it all resonates with American audiences. Have you felt that your poetry has educated them about Syria? Do you have any concrete examples of people that took action after encountering your art?

I have recieved messages from so many people across the United States who told me that they had no idea, and they would wish my family peace, and promise to raise awareness and stay up to date with the conflict

I am currently working on a project called Project More than Metaphors. I am using poetry as a means to tour the United States and both educate and connect people to the conflict personally.

The reactions in some of the shows have left people in tears. They have come up to me afterwards and asked to give poems to the refugees or pass on prayers and donations to the people.

People want to help when there is oppression.

The poetry lets people simply know about it; what they do with the knowledge is up to them. A lot of time it is activism, sometimes it’s money, sometimes it’s going home and googling the word “Syria”.

That must feel satisfying.

Changing to a discussion of your poetry of a somewhat different theme: what kind of reactions have you gotten to “This Is For the Ladies”?

It changes from feminist to feminist.

A lot of women will not respect what I am saying because I am covered, and that must mean I am a subjugated woman (a girl wrote a counter-poem in response to “For the Ladies”, and that is what she said).

Would you allow the label “feminist” apply to you?

Some Muslim women did not respect my poem because they felt like my performance was not modest.

Caught in the middle? I wouldn’t say so. My poem is a response to how many of the women in my society treat Muslim women as an inferior specimen of woman because they cover their bodies. I am not making a religious statement so much as I’m making a social statement. I am advocate of women’s rights. I do not support the patriarchal dictatorship of many Middle Eastern, Islamic countries that impose restrictions on women because of their gender, such as education and going out (important to recognize the difference between culture and religion), but I also don’t respect a patriarchal society that tells women being naked is being liberated while the male dominance in political offices goes on. Women’s rights doesn’t depend on what a woman is wearing — I do believe modestly is important, especially in such a sexualized society, but I am not going to discredit a woman who doesn’t wear hijab. The key is education. If women can learn their rights and how patriarchy is playing a role around them, they can mobilize as one unit and crack the foundation of the male-dominated society we live in.

In Saudi, though, the laws are not in favor of women. There are more women in the Saudi government than there are in the American government. The largest percentage of University students is women.

Now imagine if the curriculum was crafted to culturally accommodate Islam as well as feminist theories into one single productive system that could potentially teach women all over how to empower themselves through their minds.

I do not perform my “For The Ladies” poem very often anymore because it attacked women they way women attack the hijab, and it’s not entirely productive to communicate through that means.

Could you channel the same passion that you had in “This Is For The Ladies” into a poem on a similar theme, and which doesn’t attack women?

Of course. That doesn’t mean I will step away from my beliefs that the hijab is a tool of female empowerment, and I will continue to argue against any feminist theory that attacks a Muslim women and those who chose to cover. I will publically point out patriarchy’s role in a lot of feminist approaches, but I also won’t slut shame a woman.

I will keep an open mind, because if women work together, we can fight oppression. Unfortunately right now, we are fighting one another’s version of feminism and we aren’t getting to the source that is oppressing us.

It certainly is — and the poetic voice can be part of that conversation.

No doubt. I’d love to bring spoken word to women all over the Middle East.

I might have a resume, but I am nothing without the support and help of the people. Martin Luther King couldn’t have given his speeches had it not been for the audience to give the speech to.

I lose hope so often because people think the world’s problems are not their responsbility. I want people to know that activism is the price you pay for living on this planet. There are audiences waiting for poets to stand before them.

Amal Kassir can be reached via Twitter at AmalDiedHere.

August 2, 2013
Why Every American Should Try Fasting for Ramadan
Next Post