Maradiaga Praises Pope as a “Man of Dialogue Even in the Face of Hostility” November 21, 2017 Cameron Doody

This Monday saw the beginning, in Madrid, of a week in homage to Cardinal Vicente Enrique y Tarancón, one of the great heroes of the Spanish transition from the Franco dictatorship to modern democracy. Following a Mass in memory of the Cardinal in the parish of San Antón -the famous 24/7 ‘church of the poor’ in the heart of the capital- Cardinal Óscar Rodríguez Maradiaga, the Archbishop of Tegucigalpa, Honduras, remembered Tarancón as a man “who lived for God”, and, consequently, a man who lived “for his brothers and sisters”.

Cardinal Maradiaga is one of the international guests of honour at the week in memory of Tarancón, organized by the NGO Mensajeros de la Paz and by the leading Spanish religion news website Religión Digital. In the presence of Cardinal Carlos Osoro, the Archbishop of Madrid, and Cardinal Lluís Martínez Sistach, the emeritus Archbishop of Barcelona, the Honduran prelate reflected on the theme “from the Spring of Tarancón to the Spring of Pope Francis”.

“Tarancón was a man of God, a man who lived for God and for his brothers and sisters: a man who’s given us a witness and an example”, declared Maradiaga, the coordinator of the C9 group of Cardinal-advisors to Pope Francis. Tarancón -the Archbishop of Madrid-Alcalá from 1971-1893- was the great driver of the revolution in Spain and in Europe more generally that was the Second Vatican Council, recalled the Honduran prelate: a role for which Pope Paul VI held him in “spectacular esteem and respect”.

In regard to his political and ecclesiastical leadership during the Spanish ‘Transition’, Cardinal Maradiaga remembered the way in which Tarancón had to “sow the seeds” in Spain not only of the great aggiornamento of the Church but also of democracy. His was a calling to help to modernize Church and State, and this he fulfilled even in the face of great “hostility”.

“He dialogued with people of all kinds of opinions”, said Maradiaga, even in “difficult moments, like when after the assassination of Carrero Blanco [former vice-president of Spain under Franco], people used to say, Tarancón, al paredón [“Tarancón, to the firing squad!”, for the Cardinal’s determination that Spain embrace modern democracy]”.

What, then, are the lessons that Tarancón can teach us today? For Maradiaga, they are at least five. Prudence, justice, strength, simplicity of life… but above all, dialogue. The importance of “listening to different voices” in moments -like those Spain lived in the 70s, or like we live today -in which certain ideas seem to have a monopoly on thinking, and that because “through dialogue one can hear a symphony”.

A legacy, that of Tarancón, that lives on today for Maradiaga in the person of Pope Francis, a man who like the great Spanish Cardinal is “a man of dialogue in the midst of difficulties: a pastor who wagers on dialogue even in the face of hostility”. 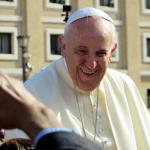 November 16, 2017
Pope Calls For "Responsible Closeness" To Sick… And To Divorcees Too?
Next Post 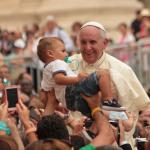 November 24, 2017 Religion Journalists Pledge Unwavering Support for Pope Francis
Recent Comments
0 | Leave a Comment
Browse Our Archives
get the latest from
Catholic
Sign up for our newsletter
POPULAR AT PATHEOS Catholic
1

The Oxford School Shooting and its...
Steel Magnificat
Related posts from European Communion