Recently, I was asked to write a blog post about a Minister I have learned from who has made a positive impact in my life.

Can we celebrate the people who have directly poured into us, instead of the random celebrities who sometimes entertain us?

Given the ways my previous supervisor has recently cared for me, this was an easy task to do. 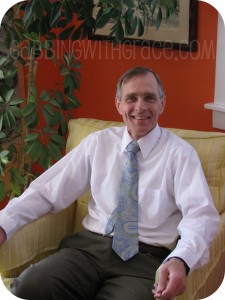 He’s nothing like me, you know.  In fact, we may be almost complete opposites on any given personality test.  What we lose in Meyers-Briggs compatibility we more than make up for in mutual respect, kindness and a healthy dollop of humor.

We do have running in common!  Only he runs Bostons…and I run, well, 14 minutes per mile.

Fred serves as the Regional Director in the Midwest for InterVarsity Christian Fellowship/USA where I used to be in ministry for the past 12 years.

Fred is responsible for thousands of college students, hundreds of staff and multiple campuses across the 4 state region.  Due to staffing losses he’s often had to double or even triple hat managerial positions.

In other words, he works damn hard.  I don’t mention this to garner praise for him being a Really Useful Busy Beaver but to give you context of how he’s cared for me and many others in the midst of it.

A short time into our supervision, Fred took a sabbatical.  He’s been in ministry for 35+ years, so a brief 6 month period to rest and recoup was in order.  Our first meeting after his return was at an outdoor cafe in Ann Arbor.  It was a beautiful warm day outside, a bit windy.  Beautiful Fred was not.  He looked out of sorts.  I too, was out of sorts.

At the time, I was confused about what to do with my life in ministry.  I had grown bored my previous assignment.  I’d faced the facts:  I didn’t know what to do next or what my next assignment within InterVarsity could be.

In short, I felt pretty useless.

Any uselessness I felt, Fred was feeling times a thousand.  As he began to tell me how difficult his sabbatical was I noticed how beat up he looked, how sullen.  Fred told me a story that perfectly captured how he felt.  In hindsight, I believe Fred was telling me the story to care for my needs but it bounced back and got him too.  Zing.

The story was about every one’s favorite ragamuffin, Brennan Manning.

Brennan had gotten wasted…again.  Years after cleaning up his act, preaching worldwide, selling best-selling books on faith and grace,  he’d gotten drunk again.  Apparently, Brennan had wandered out of a bar, fell out onto the street and slept drunken and smelly on the side of the road until morning.  When Brennan awoke to daylight, he noticed people stepping over him disgusted.  Brennan said (something like) never before had he felt more unworthy of God’s grace and love, but never before had he ever felt more like the recipient of it.

As Fred told me the story his eyes began to fill.  He choked up on his words.

Never one to spoil the party, I cried too.

I saw something in Fred that day, it’s hard to describe, but I dare say it was his weakness.  He wasn’t sitting up as straight, his face frail.  He was vulnerable, not merely because he was crying but because he’d absorbed truths –heavy truths– about his own usefulness in the Kingdom of God and the revelation had weakened him.  He’d lived and felt Brennan’s words, not because he’d went out and drunk himself unconscious but because God loved him, cherished him, wanted him without being a Really Useful Busy Beaver.

He wept, and I wept.  And I knew I could trust him to lead me.

At an InterVarsity event, I told Fred we “needed to talk.”  I had something to confess.  I didn’t know how he would respond or what he would do but I knew this…

3. He wasn’t going to belittle or make fun of me.

4.  He wasn’t going to treat me disrespectfully.

5.  He wasn’t going to act like he was better than me.

Frustrated and disappointed was more along the lines of what I was expecting.  But, he give me that either.  He was appropriate, kind, respectful and filled with grace.

Isn’t it so much easier to share the messy parts of life with folks who treat you with compassion?

And from that point on, each time I told him we “needed to talk,” it was as if I was in a competition with myself to out do the last hard conversation we’d had.  At what point can one push their supervisor far past what they can handle?

Over the course of the year I proceeded to really struggle. Fred was one of the primary people who supported me, tried to help me, prayed with me, checked up on me, prayed for me and asked me –in person– how I was doing.  More than once he offered to sit down and talk with Dave & I, which at the time, friends was BRAVE.

Many, many times we’d start our monthly supervision appointments with tears, mostly mine.  One by one, he’d walk us through each of the issues I presented and offer suggestions, alternative behaviors and mindsets or ask such deep, probing questions I’d have no other recourse but to face my plethora of issues.

What I appreciated about how Fred handled my absolute vulnerability of that time is that he’d often share an instance when he lived something similarly.  A lot of my drama during that time was surrounding our creaky marriage.  Occasionally, Fred would start a story with… ‘well you know when my wife and I were struggling in a similar way,’ and I’d interrupt him and say, “SHUT. UP. You & your wife had this same argument?! No flipping way!”

A little more than a year ago,  I spent the first 4 hours of a staff meeting crying on and off in the corner of a back room.  Even though Fred was  in charge that day and juggling many other concerns I selfishly texted and asked if we could talk.

He took the time out to sit down with me for 40 minutes to help me work through the present day crisis.  I’ll never forget the moment when -through tears- he asked me why I would throw my life away, why I would hurt myself and my family so deeply.  Suicide was a distant temptation that I tried to be honest about in case it ever came to feel like an intriguing option.

I didn’t have an answer for Fred.

Fred is no longer my supervisor.  When I left InterVarsity in mid-July, we had our final bittersweet supervisory meeting, Fred said something that brought me to tears.  Yes, again.  Emotional fellow, eh?

Knowing his friendship has been dear to me, he said he didn’t want to be another man in my life who intentionally or unintentionally abandoned me.  With that, he asked if I wanted to keep in touch every now and then.  I found the gesture to be incredibly meaningful and I hope that even in small ways Fred will be in my life for a long time to come.

Many years before all this happened Fred poured into me.  He concerned himself to develop me as a leader and a woman of faith.  He empowered me to LEAD and never stopped believing in me.  I suppose he’ll continue to have an influence in my life even though we don’t work together directly, nor live in the same town.

His legacy in my life isn’t because of what he’s all ready done to uphold, protect me and care for me but because it is who he is.  It is because he’s a man careful to follow that one all important commandment God gave us to love the Lord our God with all of our heart, mind, soul and strength AND to love our neighbor as ourselves.

I could call Fred’s investment in me extraordinary or I can call it what it is, love.  He loved his neighbor as himself.

…and I am so very thankful for my neighbor. 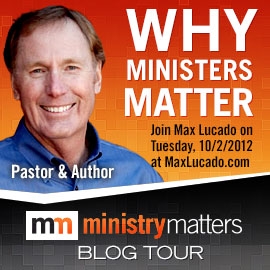 Join the MinistryMatters.com “Why Ministers Matter” blog tour to read today’s leading pastors and authors share their stories of ministers who made a difference in their lives.

Visit MinistryMatters.com/blogtour for a complete list of virtual tour stops and to link up your own post about a minister who mattered to you!

October 7, 2012 Try Not To Settle for Anything Less Than An Amazing Life
Recent Comments
9 Comments | Leave a Comment
Browse Our Archives
Follow Us!

Snake-handling is unwise, but at least...
slacktivist
Related posts from Everyday Black Matters