‘Real Housewife’ Wants You to Know That Christianity Is Compatible With Plastic Surgery November 15, 2011 Lilit Marcus 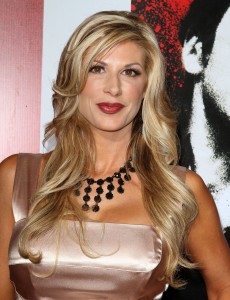 It’s nothing new for celebrities to get plastic surgery, but it is new for one to claim that their enhancements are Jesus-approved. Real Housewives of Orange County cast member Alexis Bellino, whose nickname is “Jesus Barbie,” took to Bravo’s website to address critics who say that fake boobs go against the Bible. In a post entitled “Am I A Christian In Your Eyes?” Bellino writes:

Since my debut on Real Housewives of Orange County, I have been truthful about my belief system, what I stand for, and about my faith as a Christian woman, wife, and mother. What I have not always been truthful about is how it has made me feel to be Christian in a setting where infinite variables are pitted against me. It seems everyone is looking for contradictory behavior that “proves” I’m not a “real” Christian. Here’s an example: Some have said, “If you believe in God and that He has a plan, isn’t it going against His plan to alter your body with breast augmentation or Botox?” Here’s another one: “Real Christians don’t dress the way you dress—my pastor would drop dead if he saw a member of his congregation in that outfit.” And yet another one: “I can’t believe you allow your children to dress up for Halloween, a holiday that celebrates Satan.”

Part of me wants to slap on my shortest shorts, hop on my soapbox in my highest spike heels, and start yelling out things like, “What kind of Christian would YOU like me to be?” or “What kind of Christian—who isn’t supposed to judge—would say that someone isn’t a ‘real’ Christian because of a wardrobe choice?” Another part of me—the part you usually see on the show—wants to turn the other cheek, take things with a grain of salt, and remember that we are all entitled to our own opinions.

I’m tired of being judged as a Christian. Yes, I am on TV and that means I have knowingly opened myself up to be criticized, chastised, and judged. But when I post something on Facebook about going on Playboy Radio and I am told I’m not Christian, it makes me scratch my head. Did you know that Playboy gives millions of dollars to charities all over the world, including March of Dimes, and several other children’s organizations? I’m not ashamed to have been on Playboy radio at all! The Bible tells us to take the message of Christ NOT to those who already “get it,” but to those who are still in darkness who haven’t yet embraced the Lord.

In my heart I am Christian, and I am married to a Christian man, raising a Christian family. I am doing the best I can to be the best person I know how. I’m not losing any sleep over my relationship with the Lord because I know he loves me and everyone else too. I will continue to be exactly who I am without apologies. I love the life I have chosen, and I love working hard at making it better everyday. I see the goodness in thousands of people everyday, and for that I am blessed. My final thoughts– Be faithful to whatever you believe in. Do good in this world. Don’t worry about what someone else is wearing, saying, doing. Focus on your family and your actions and try to better them every day. Hate is an emotion that wastes a lot of energy. Be good and be good to yourself!

Well, for those of you who turn to reality TV personalities for your theological questions, you finally have the answers you’ve been waiting for. Besides, I am totally sure Jesus would have gotten Botox if it had existed back then. Or at least Mary Magdalene would have.