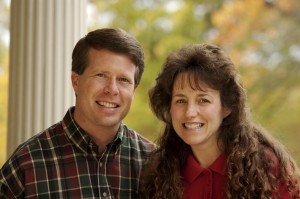 Jim Bob and Michelle Duggar recently took some time out of their busy Santorum-stumping schedule to spend Valentine’s Day without their kids in New York.

As a cynical regular watcher of their show, I might add that there’s nothing that unusual about the couple not spending time with their kids, as the four oldest daughters are basically raising their siblings anyway.

As a cynical regular watcher of their show, I might also say that this whole thing was just a publicity stunt designed to distract people from the fact that someone tried to blackmail the Duggars by claiming to have explicit photos of their cousin Amy “Cousin Oliver” Duggar, an aspiring country singer, in flagrante delicto with a much-older dude. And I might even go one step further and say that there have been a lot of rumors that the Duggars’ show is on their last legs, especially since the similarly-fecund Bates family just got their own TLC show. But I wouldn’t say that, of course. Happy Valentine’s Day, y’all!