‘Bachelor’ Sean Lowe’s Parents Prayed For Him to Get a Wife March 12, 2013 Lilit Marcus 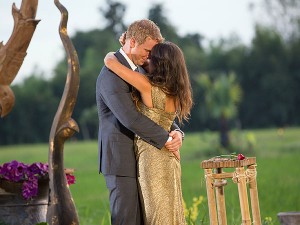 Last night was the conclusion of the latest season of The Bachelor, which ended with Sean Lowe (spoiler alert!) proposing to Catherine Giudici. The last episode of the season traditionally features the Bachelor or Bachelorette’s family meeting the final two contestants and telling their son/daughter which one they liked better. Sean is a born-again Christian, and he’s also a born-again virgin. Though he’s had sex in the past, he recommitted to his faith and took a vow of celibacy until marriage. Sean’s parents are also religious, and they said on the show that they had been praying for Sean’s hypothetical future wife “every day since he was born.” But hey, no pressure!

Not only did Sean and Catherine get engaged, they announced their intention to get married ASAP on live TV, presumably because they really want to have sex. That’ll be a disappointment to April on Grey’s Anatomy, who was surely enjoying having another revirginized person on TV.

March 13, 2013 Dennis Rodman Wants to Meet the New Pope for Some Reason
Recent Comments
0 | Leave a Comment
Browse Our Archives
get the latest from
New Visions
Sign up for our newsletter
POPULAR AT PATHEOS New Visions
1