Section 7 of the Doctrine and Coventants shares much of its language and content with John 21, a few other New Testament texts like Hebrews 1 and Matthew 16, as well as 3 Nephi 28. This commonality is no secret. Most all the cross-references are listed right there in the footnotes to the standard edition.

What to make of the commonality is of course debatable, but it can be argued that D&C 7 adds new material to John 21 by drawing from Hebrews 1 and Matthew 16. The Book of Mormon then builds on D&C 7 in 3 Nephi 28, drawing further from Paul.

It can also be argued that much as John 21 itself, neither D&C 7 nor 3 Nephi 28 would have been written had the return of Jesus not been delayed. If Jesus had returned in the first or second century, there would have been no need for the development of a doctrine of ‘translated beings’ such as John the beloved disciple and the three Nephites—beings that tarry on or around the earth for hundreds, even thousands of years.

Fast forward a couple millennia, and Jesus has still not returned. So the question for Joseph Smith and Oliver Cowdery is “whether John, the beloved disciple, tarried in the flesh or had died.” As a (p)rewriting of the biblical text, D&C 7 tries to get behind the third-person narrative of John 21 to the voice and authority of the beloved disciple himself in order to give a definitive answer. It also adds new material to John 21, John 21 itself being an ancient addition to John 20.

The new material added to John 21 in D&C 7 is drawn in part from Hebrews 1 as an explanation of how the beloved disciple had tarried so long and could still be alive in April, 1829: he had become an angel. John himself recounts Jesus’ statement of his angelification, while the actual experience of becoming an angel was soon to be described in 3 Nephi 28 as the three Nephites desire the same thing that John desired.

The new material added to John 21 in D&C 7 also draws from Matthew 16, where Jesus tells Peter that he will give him the keys, and that “there be some standing here, which shall not taste of death till they see the Son of man coming in his kingdom.”

Despite Peter’s desire to come speedily unto Jesus in his kingdom, in D&C 7 it is not clear that Peter in fact did so. He and James and John take part in what looks like the same ministry, all three having been given the same power and keys. This re-interpretive allusion to the giving of keys in Matthew 16 is striking because here in D&C 7 the keys are not given to Peter alone; they are given to him, James, and John: “and unto you three will I give this power and the keys of this ministry until I come.”

If the power and keys of ministering and tarrying until the return of Jesus are among those given to Peter, James, and John in D&C 7, this would go some way towards resolving the issue of Jesus’ saying in Matthew 16 that “There be some standing here, which shall not taste of death, till they see the Son of man coming in his kingdom.” The more and more time passed before Jesus’ return, the longer and longer some of the disciples would have to live in order for this saying to be true in any literal sense. And it could not be just one disciple, e.g. John. It had to be some.

Jesus’ saying in Matthew 16 is similar enough to what he says of the beloved disciple in John 21. In Matthew 16 Jesus says that “some … shall not taste of death, till they see the Son of man coming in his kingdom;” in John 21 Jesus of the beloved disciple that he will “tarry till I come.” But by combining Matthew 16 and John 21 in the way it does in order to work out problems caused by the delay of Jesus’ return, D&C 7 also introduces certain tensions of its own within John 21 and the New Testament as a whole. Peter and James could not be among Matthew’s ‘some that shall not taste of death’ because the future death of Peter is mentioned in John 21, and the death of James is related in Acts 12.

Even a (p)rewriting of the biblical text as creative as D&C 7 could not avoid these tensions due to the constraints of the canon. Only in the extra-biblical text of 3 Nephi 28 were the tensions resolved in the figures of the three Nephites, each like John in their desire, and none of them tasting of death, just as Jesus said about the ‘some’ in Matthew 16.

3 Nephi 28 was written apparently no more than a month or so after D&C 7, and it seems that the inquiry started by Joseph Smith and Oliver Cowdery was still going. In April 1829, they wanted to know “whether John … tarried in the flesh or had died.” Provisionally it was sufficient for them that John had become an angel. But by May, as editor/narrator of the gold plates, Mormon wants to know details about the process of angelification and whether the three Nephites who had become angels like John were immortal or not.

In language also found in 1 Corinthians 15, Jesus tells the three Nephites that when he returns they “shall be changed in the twinkling of an eye from mortality to immortality.” This would be a stunning reuse of Paul, who believed that “we shall not all sleep,” i.e. not all die, because Jesus would return within Paul’s own lifetime or at least within the lifetime of a few of his peers. In keeping with the delay of Jesus’ return, however, in 3 Nephi 28 now the change is to happen centuries later. Mormon, writing circa 400 CE, claims to have seen the three Nephites, whom he refers to as angels, and who so “remain until the judgment day of Christ” hundreds of years in the future.

The actual experience of their angelification is described in 3 Nephi 28 in Pauline terms as well. In preparation for their change in the twinkling of an eye at Jesus’ return, according to the Nephite record, the three were then “caught up into heaven, and saw and heard unspeakable things … And whether they were in the body or out of the body, they could not tell,” once more akin to Paul in 2 Corinthians 12.

But unlike Paul who eventually died after his in-and/or-out-of-body experience, theirs had lasting effects. As Joseph Smith and Oliver Cowdery inquired about John, Mormon states that he too “inquired of the Lord” regarding the three Nephites and whether they were mortal or immortal. After what he wrote previously, he learns that in fact there was “a change wrought upon their bodies, or else it needs be that they taste of death;” a change but “not equal to that which shall take place at the last day.”

Thus the problems caused by the delay of Jesus’ return are worked out, and the tensions introduced by D&C 7 are resolved in 3 Nephi 28.

Finally, if there is a correspondence between Peter, James, and John in D&C 7 and the three Nephites, then the autobiography also runs in the other direction when Joseph Smith and Oliver Cowdery are subsequently visited by Jesus’ three Old World disciples sometime in 1829/30, as Mormon had seen the three Nephites.

February 7, 2013
On Sale! Book of Mormon: A Reader's Edition
Next Post 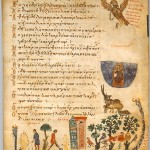 February 11, 2013 On the Malleability of Gold Plates: Mormonism and Modern Biblical Scholarship
Recent Comments
0 | Leave a Comment
Browse Our Archives
get the latest from
Latter-day Saint
Sign up for our newsletter
Related posts from Faith-Promoting Rumor

Latter-day Saint
Some More on the BYUNTC and Snuffer’s Version...
Faith-Promoting Rumor