On the Malleability of Gold Plates: Mormonism and Modern Biblical Scholarship 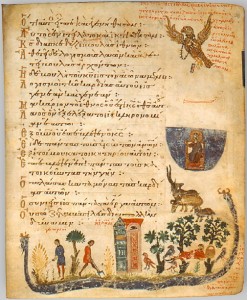 From the time I first came to understand the nature of  pseudepigrapha, I felt comfortable with the idea that many of these extra-scriptural writings were written under assumed names. Somewhere I had picked up the idea that it was a common and accepted convention for works of antiquity to be attributed to someone famous. There are ancient books of Adam, of Enoch, of Abraham, all written by later authors under a prophetic moniker to give their writings authority and status. Even our book of Psalms in the present canon includes poems with headings “A Psalm of David”—(lᵊ dawid).  This has traditionally been understood to denote Davidic authorship, even though Biblical scholars agree that some of these were post-exilic. As Jana Riess puts it:

The Hebrew preposition “l” can, like many Hebrew words, mean a variety of different things. Often translated “of,” it can also mean “to” or “for” (a Psalm for David) or “in the manner of” (a psalm that’s like something David might have written if he were still with us; R.I.P.).

In his work, “The Book of Psalms,” UC Berkeley Hebrew professor Robert Alter taught that “it was a regular practice in the later biblical period to ascribe new texts to famous figures of the past.” This is what I had always heard.

Not so! says Bart Ehrman in his groundbreaking treatment of the subject. In the 2011 book Forged,  Ehrman asserts that writing in the name of a famous prophet or biblical figure was just as scandalous in ancient times as any forgery would be today.

“…ancient authors did see this kind of activity as fraudulent, they recognized it as deceitful, they called it lying (and other even nastier things), and they often punished those who were caught doing it…. My use of the term “forgery”… refer[s] to one kind of pseudepigraphical writing, one in which an author knowingly claims to be someone else. One of the overarching theses of my book is that those who engaged in this activity in the ancient world were roundly condemned for lying and trying to deceive their readers.” (p. 25)

This idea pushes against my comfortable understanding of  the propriety of the pseudonymous authorship of ancient texts. But Ehrman then goes even further — exposing which New Testament books he considers to be outright fakes! For example, chapter 2 deals with 1 and 2 Peter. The author goes into great detail to back up his claims that these writings were “forgeries.” Frankly, I find his argument very convincing. Here are just a few examples Ehrman uses:

By contrast, Latter-day Saints customarily attribute the various books in the Biblical canon to their traditional authors.  This is evident in the case of 1 and 2 Peter in the following LDS resources:

Currently, Mormons are obliged by their tradition to read the scriptures as literally and historically true. For many Christians in general and for Mormons in particular, the central message of the Bible hinges on the factuality of every recorded detail of a specific historical event: the suffering, death, and resurrection of Jesus Christ. Was Jesus literally resurrected from the dead? We run into a problem if we question the reliability of the witnesses. For, if the authors are not who they say they are, might we not also logically question the historical veracity of the text so falsely attributed?  Modern LDS scripture provides an added challenge to this already-difficult situation for Latter-day Saints. The Restoration is closer to us in time than biblical history; the Doctrine and Covenants is seen as an historical narrative of the Restoration. And the Doctrine and Covenants treats Biblical characters and events as literally true.

I wonder what effect modern biblical scholarship will eventually have on Mormon approaches to scripture. How malleable is our own tradition? Will the numerous competent scholars such as Ehrman writing popular biblical studies for the general reader lead to shifts in LDS views? The very word “forged” causes a strong reaction in the Mormon heart. It will be difficult to give up the strict literalism which has so long characterized LDS hermeneutics.

What if we were to discover that the scriptures were quite a different thing that what we’d been told? Eventually, we will be constrained by biblical scholarship and our own move towards modernism to confront this problem. We may fail to recognize the inevitability of change, or realize the shape of what is to come; yet as we sit in our Sunday School classes and study the New Testament,  the process of transformation has already begun. When we face this question, what will become of us? Are we ready for this much change and open-mindedness? Will Latter-day Saints ultimately reject the critical approach to scripture (much as their Christian fundamentalist counterparts do), or is it possible to value a text without demanding that it maintain complete historical integrity? Many of us are skilled at seeing interior truth in scripture. We find that it can strike us with great power — forcing us to consider what it means to live a human life, illuminating for us the very meaning of what it is to be human. Perhaps, if a scriptural text teaches true principles, there is benefit which can be derived from it without regard to its literal historical accuracy. But will our tradition ever be able to accommodate such a view?

February 13, 2013 The Evolution of Faith: or is God Creating a Better Mormonism?
Recent Comments
0 | Leave a Comment
Browse Our Archives
Follow Us!